"To Kill A Mockingbird" - Literary Analysis

Martin Luther King Jr., once said, “We are not the makers of history. We are made by history.” Many authors during every century have used this historical lense in some way. The historical lens is analyzing literature in the ways it was influenced by history. One of many, Harper Lee, author of To Kill A Mockingbird, was extremely influenced by many historical events that she connects to her novel. Harper Lee explains the history of racism and segregation in Alabama through the Scottsboro trials, Atticus Finch, Scout Finch, and Tom Robinson.

Don't use plagiarized sources. Get your custom essay on
“ “To Kill A Mockingbird” – Literary Analysis ”
Get custom paper
NEW! smart matching with writer

In the United States alone, the great stock market crash otherwise known as The Great Depression was so severe on the economy, that millions died of starvation and disease. In Alabama during the 1930’s, segregation and racism was as bad or worse as segregation and racism in other states. In Scottsboro, Alabama in 1931, nine young men were accused of raping two white women as they were getting on a train.

Harper Lee made many connections with the Scottsboro trials and the trials that take place in the novel.

For example, Tom Robinson and the Scottsboro boys both deal with white women accusing black men of sexual assault. (Entre quote here). Similarly, both trials take place in Alabama. The Scottsboro trials take place in Scottsboro, AL as well as To Kill A Mockingbird… although the sleepy town of Maycomb is fictional. Scout Finch described Maycomb through her eyes and she says, “Maycomb was an old town, but it was an old town when I first knew it.

Racism in Alabama in the 1900’s was extremely common. In To Kill A Mockingbird, there are many extreme examples of racism sprinkled throughout the novel. One instance of racism in the novel is how the town responds to Atticus and his defense of Tom. Atticus decides to defend Tom Robinson because he believes that Robinson is innocent. While having a discussion with one of the men that came to his house, Atticus says, “…And you know what the truth is (Lee 195).”This decision invites the opinions of the whole county of Maycomb. For example, in chapter nine, Scout’s classmate, Cecil Jacob, announces that Scout’s father is defending a ‘Negro’. Scout says, “Then why did Cecil say you were defending niggers? He made it sound like you were runnin’ a still (Lee chapter 9).”

As well as that, another significant event of racism is the description of two colored people’s relationships often called “Nigger Love”, a word that many people used in the 1930’s. In chapter … The term peaks Scout’s interest so she asks Atticus, “quote here”(Lee…) The way Atticus explains the term in a positive way is extremely moving. He explains to Scout that she is above all of the racist terms that the residents in Maycomb use.

Another example of racism in the novel is the story of Boo Radley. Boo is a white teen, who stabbed his father with scissors and got away with it because he was white. Although he committed this crime, he wasn’t locked up with the colored inmates. Most of the information that Scout and Jem gained about Boo was from their neighbor, Miss Maudie. Maudie tell the children the tale of Boo, and continues to say, “The sheriff hadn’t the heart to put him in jail alongside Negroes, so Boo was locked in the courthouse basement (Lee 11).” The courthouse officials decided to lock him in the courthouse basement instead. The Maycomb county Sheriff decides it would be “too harsh” to lock him up with the other colored inmates in prison.

Although the trails are about Tom Robinson, he was deeply affected by the accusations put on him. The day he was accused, he saw what people with a good reputation could do to a man of color, and to people of color in general. During this time, these kind of situations were extremely common, but normally nobody would stand up for any of the accused men who clearly didn’t do anything wrong—they all suffered because nobody would protect them. Most times, the town would gather and hang the men accused, even without evidence.

Similarly to racism in the 1900’s, segregation was a very common concept as well. One example of segregation in To Kill A Mockingbird, are the churches in Maycomb County. Along with many things during this time, blacks and whites had separate churches. Miss Maudie and the Radley’s are Baptist’s, while the Finches are Methodists. Calpurnia attends the segregated First Purchase AME church in Maycomb. She brings Jem and Scout to show them what her church is like. With surprise, the other people of the church do not approve of Calpurnia’s company. …. says, “You ain’t got no business bringin’ white chillun here — they got their church, and we got our’n (Lee ch12)”

As well as racial segregation, there was also gender segregation during this time period in Alabama. Being a woman in the 1930’s meant something totally different than it does now. In many people’s eyes—not just men’s— a good woman was a good housewife. Men and women both believed that women belong in the kitchen, doing chores, tending to the children, etc.

Through the novel, gender prejudices are reflected in Maycomb. Our protagonist in To Kill A Mockingbird, Scout Finch was a tomboy. She wore dirty overalls and played in the mud with her brother. When her Aunt Alexandra comments on her unladylike ways, Scout doesn’t know how to take it. Scout goes on to say, “Aunt Alexandra’s vision of my deportment involved playing with small stoves, tea sets, and wearing the Add-A-Pearl necklace she gave me when I was born; furthermore, I should be a ray of sunshine in my father’s lonely life (Lee 108).”

Similarly to Aunt Alexandra, the men in Maycomb also support the gender prejudice trend growing within their small town. For example, a group of men gathered outside of Atticus Finch’s house to discuss Tom Robinson going to jail, the women in Maycomb were left out of the situation. Women in the 1930’s weren’t usually included in anything politics related and needed to be protected.

Another example is a simple fact that Atticus states, “For one thing, Miss Maudie can’t serve on a jury because she’s a woman (Lee 146).” In many of the men’s eyes, the ladies of Maycomb needed to be protected and sheltered from the bad things in the world, because they can’t handle themselves. Atticus continues saying, “I guess it’s to protect our frail ladies from sordid cases like Tom’s. Besides,’ Atticus grinned, ‘I doubt if we’d ever get a complete case tried—the ladies’d be interrupting to ask questions (Lee 146).” Although Atticus is making a joke, there is a hint of truth. It is a very common insult that women ask too many questions and are supposed to sit down and not put their two cents in.

From Scout’s point of view, the gender prejudice she’s been exposed to was very disheartening. She’s a young girl in the 1930’s with everyone around her saying “the sky’s the limit for men, but the kitchen is the limit for women.” It’s affecting her ambitions and self confidence as well. She says, “I was not so sure, but Jem told me I was being a girl, that girls always imagined things… (Lee 119).” Growing up during this time must have been hard for Scout, yet she’s being raised by the right people.

As well as the rise in racism and segregation, The Great Depression hits the rural south the hardest— where To Kill A Mockingbird takes place. An example of how the Great Depression affected Maycomb is the loss of jobs. We see two major families that lost their farms and jobs— The Cunningham’s and the Robinson’s. When Scout asks Atticus if their poor he says, “Not exactly. The Cunninghams are country folks, farmers, and the crash hit them hardest’ (Lee 21). Atticus explains to Scout how they are poor, but there are others more poor—considering the crash hit the farmers the hardest.

By using Atticus Finch, Scout Finch, Tom Robinson, and examples from the Scottsboro Trials, Harper Lee explains the history of racism and segregation in Alabama. The historical lens is analyzing literature in the ways it was influenced by history. As used by many authors, Harper Lee, author of To Kill A Mockingbird, was extremely influenced by many historical events that she connects to her novel. Many great authors are inspired by historical events. Some, even more than others. Yet— they all have the same message. As Martin Luther King Jr., once said, “We are not the makers of history. We are made by history.”

"To Kill A Mockingbird" - Literary Analysis. (2021, Aug 16). Retrieved from https://studymoose.com/to-kill-a-mockingbird-literary-analysis-essay 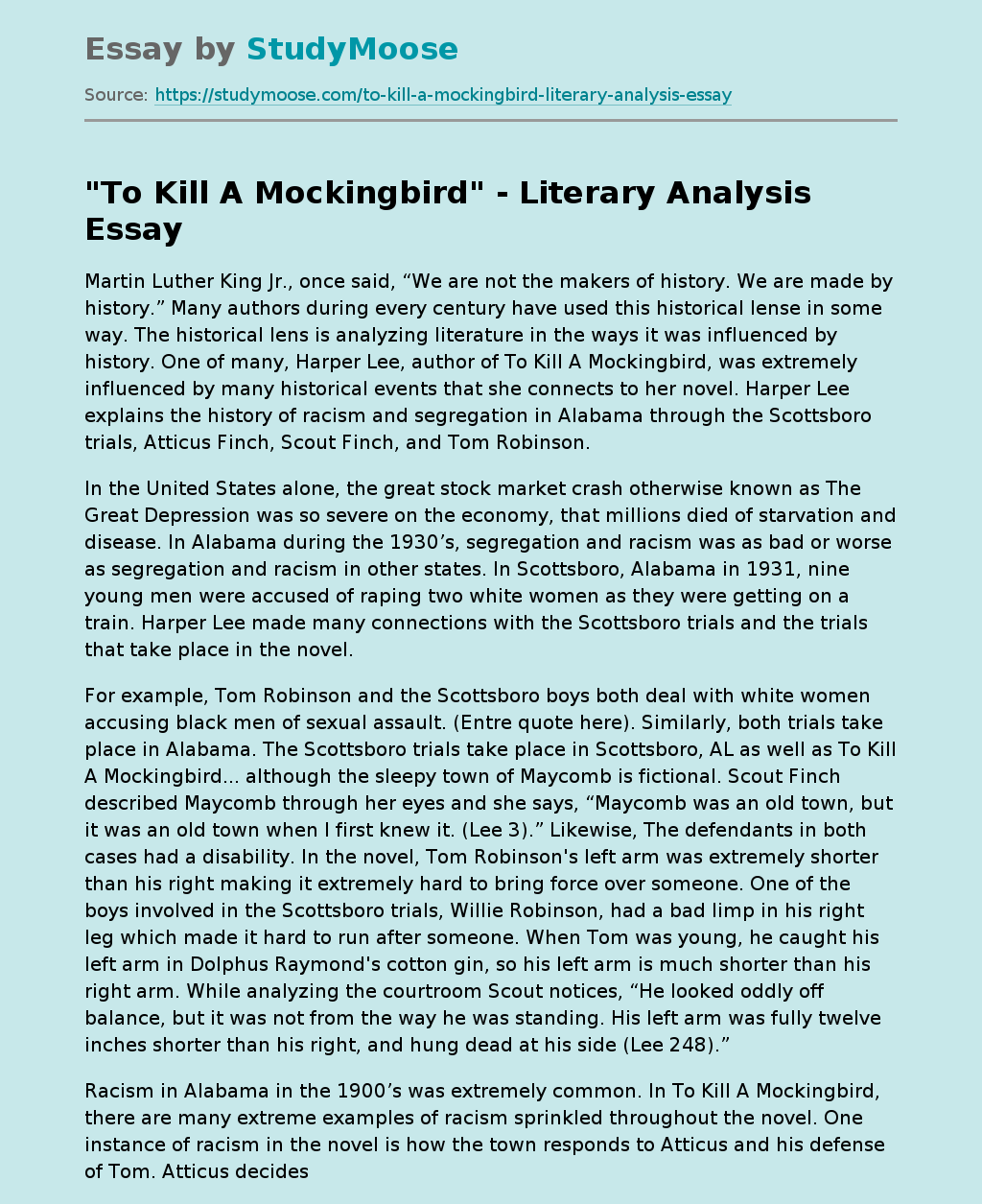