Thinking Through Film Stranger Than Fiction

Zach Helm is a writer born in California, USA and he is mostly known for the film ‘’Stranger than Fiction’’ for which he won awards such as Literary Award at PEN Centre and NBR award at National Board of Review in USA and was also nominated for the Saturn Award at Academy of Science Fiction, Fantasy & Horror Films. ‘’Stranger than Fiction’’ is a film that illuminates many philosophical themes such us existentialism, free will and determinism but this essay is focused on epistemology (theory of knowledge).

Don't use plagiarized sources. Get your custom essay on
“ Thinking Through Film Stranger Than Fiction ”
Get custom paper
NEW! smart matching with writer

Knowledge and the differences between reality, dream or fiction have been discussed by many philosophers such as Socrates, Thaetus, Plato and Descartes who with discussions, rational or empirical thinking, tried to approach a distinctive border between these terms. This is a story about a man named Harold Crick. And his wristwatch. Harold Crick is a boring IRS employee who lives a quiet and uninteresting life until the day he starts hearing a voice in his head.

This voice sounds like a female narrator who narrates parts of his own life. In order to prove to himself that he is not actually insane he visits a psychiatrist who suggests that he has schizophrenia.

During his visit he mentions that the voice has a developed vocabulary she suggests to him to visit a famous literature professor, Jules Hilbert. During his search for this strange narrator he meets a beautiful woman who works at a bakery shop whom he falls in love with. While his life now has meaning for him, this voice warns that he is soon to die soon.

The worst part is that this voice is not only in his head but belongs to a writer Kay Eiffel and Harold Crick is her upcoming book’s character. From the beginning of this film (Stranger than fiction) we follow Harold Crick who has OCD (Obsessive Compulsive Disorder).

OCD is a mental disorder that consists of unwanted and intrusive thoughts often (but not always) accompanied by behaviour that has an element of compulsion to it. (Dr Frederic Toates, 2005). He lives his life in order, counts his brushstrokes, the number of steps to reach the bus stop, his work breaks and all timed with his wrist-watch. All of his life so far was based on his five senses and what he considered and perceived as real. This is either a problematic way of understanding life because what we as individuals perceive as true or real can be perceived differently by others.

Plato had dismissed this theory by Theaetus that knowledge is perception (Tht 151e) because our awareness of some properties that come through our senses differ from one to another (temperature, heat, sound, etc. ) (Mason, Andrew, 2010, p62) Harrold Crick lost his certainty about his own existence and found himself questioning his senses, which according to Leibniz do not give us the whole truth. Crick started listening to a voice in his head narrating ‘’accurately and in better vocabulary’’ as he referred to the psychologist to be his problem.

As John Locke mentioned in his fourth book, one of our threefold knowledge of existence is that the Konstan? nos Kapoutsis G 20594930 PV 2006- Thinking Through Film Assignment 1 knowledge of our own existence is intuitive. We think, we reason, we feel pleasure and pain. When we act all these sensations we cannot be more certain about our own existence (John Locke, Book IV, Chapter IX) but the senses, although they are necessary for all our actual knowledge, are not sufficient to give us the whole of it, since the senses never give anything but instances, that is to say particular or individual truths… …

From which it appears that necessary truths, such as we find in pure mathematics, and particularly in arithmetic and geometry, must have principles whose proof does not depend on instances, nor consequently on the testimony of the senses, although without the senses, it would never occurred to us to think of them… (Leibniz, 1704, Preface, pp. 150–151,).

Crick found himself exactly to the point between these two theories. In the life that most people consider as real, we all have a voice inside us, the voice we think and it is normally in the first person. The voice Harrold Crick heard was in third and surely made a difference in the way he lived his life. When he thought that thinking in the first person was his own voice that he dictated and he was the one who ruled his own life then he felt that he lost this control and he was guided by someone else.

When Descartes questioned what he perceived as what is real or not he spoke about this voice inside him which made him believe that everything around him such as the sky, the earth, the air, the colours, the shapes etc. which are indeed perfectly scaled mathematically could be just illusions and nothing different from what we see in our dreams or simply a deception that some spirit imposed upon us. As a believer in god, he didn’t want to blame God but an evil spirit for this deception.

I will there suppose that, not God, the perfectly good and source of truth God but some evil spirit supremely powerful and cunning, has devoted all his to deceive me. (Descartes, first meditation, 22, p16) The pursuit though, to find the truth does not stop at accepting that he is being deceived but instead act rationally and even though he will think that everything around him has no difference from the illusion of our dreams, he will still act as they are real. (Descartes, first meditation, 23, p17) In the case of Harold Crick, we can assume that Descartes’ evil spirit deceiver is the writer who narrates his story inside his head.

Most of the things Harold does are narrated. It seems that he just follows the instructions. He then accepts that the voice exists and he is convinced that it rules his life but he does want and need to know what it is, just like Descartes. Even though some parts of Crick’s life are narrated, others are not. This is a sign that either Harold has free will and his actions let his life go on or he is just listening to parts of his already written fate. Harold finally meets the owner of the voice, the ‘’deceiving evil demon’’, Karen Eiffel, an author who is completely unaware of Harold’s existence.

Eiffel is the ‘’creator’’ of characters that were killed in her books. She thought that they were all part of her imagination. After Eiffel met Crick in person she decided to give him the chance to read his ‘’future’’, the draft of the rest of her book. This action removed the title of her being an evil spirit and confirms that Harold does have free will in the rest of the film. With his free will, Crick could make his own choices and leave or stay in an already set up world. He could either live his life and avoid being part of the world Eiffel Konstan? nos Kapoutsis G 20594930 PV 2006- Thinking Through Film Assignment 1 created or stay in it and save a kid’s life.

As Descartes mention’s in his fourth meditation free will is what makes us, the imperfect beings, to err or not. With our free will we choose to affirm or to avoid certain situations and the closest we are to truth and goodness the less likely to err is. (Fourth Meditation, 40) After Crick read the draft of the final book and his imminent death, he visited professor Hilbert once again and after the professor assured him that his death would be meaningful and not a random death that could happen anyhow and anywhere, he chose to sacrifice his own life for both a kid and literature.

On the rest of the film, writer Zack Helm, tries to explore many other philosophical questions too that could possibly make a comment on the important one of what is the meaning of life. This essay was based on philosophical theories on the theory of knowledge (epistemology) as they were expressed by few philosophers such as Plato, Descartes, Leibniz and Locke. When the voice inside Harold’s head confirmed his imminent death, the conflict about what is thought to be known took over.

Harold experienced a part of his life as construction of someone else’s imagination which made him question his dictation over his own life and his free will while experiencing a situation where his reality felt like constant illusions presented to him by a deceiving evil demon as described by Descartes. His whole state of mind changed and what he the considered as real is now different. This film gives us so much space to think the same kind of philosophical questions about our own lives about what we consider reality and if our senses are enough to reach the absolute knowledge because we think in first person rather than a third one to alienate us from our own existence.

Thinking Through Film Stranger Than Fiction. (2016, Nov 23). Retrieved from https://studymoose.com/thinking-through-film-stranger-than-fiction-essay 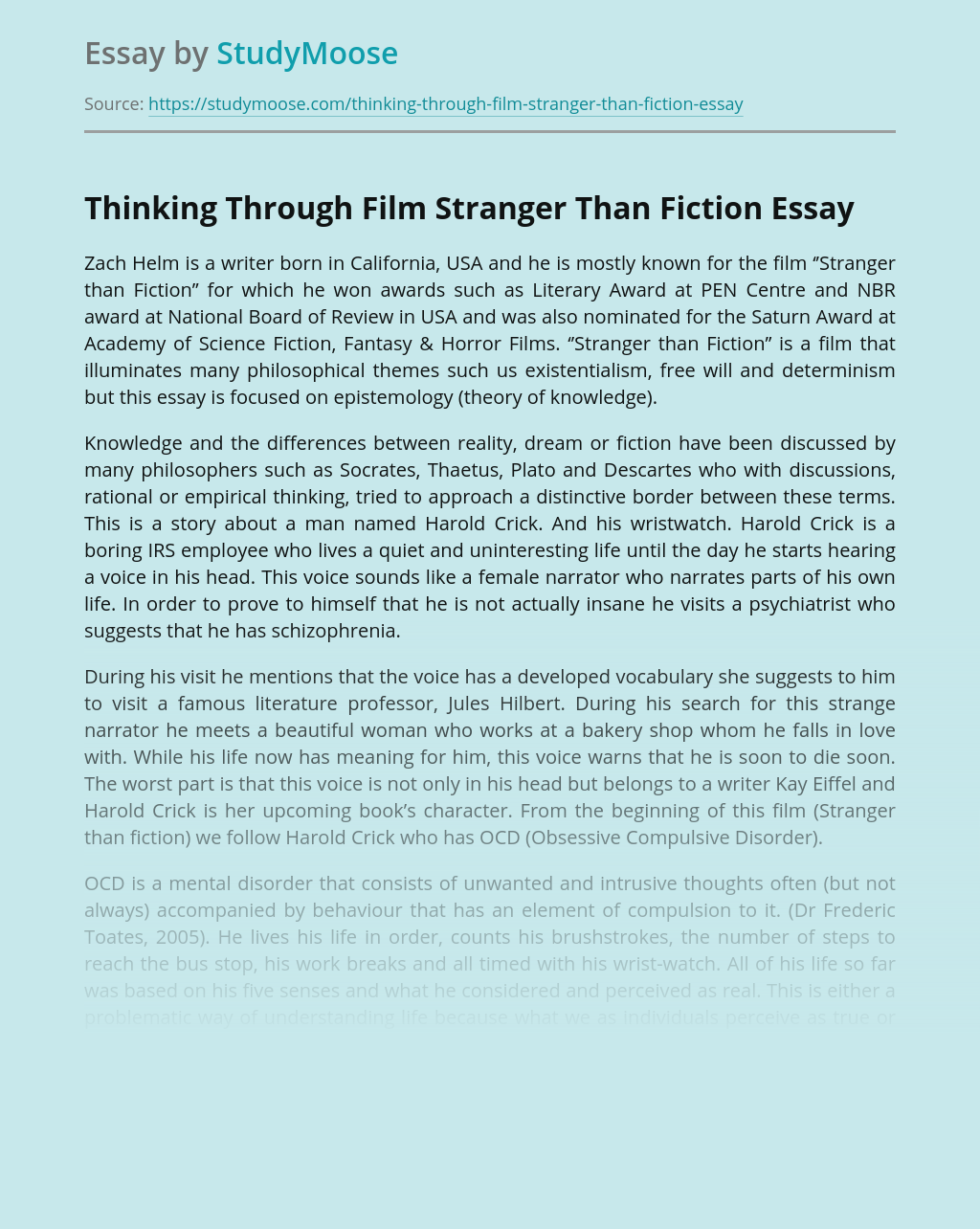