The theme of loneliness in 'Of mice & men'

“Of Mice and Men” is a skillful novel, which deals with the theme of `outsiders’, that is, individuals who do not fit into the mainstream of society. The novel portrays this idea of loneliness throughout John Steinbeck’s stimulating and exciting novel.

There are several clearly identified themes running through the novel. The loyalty and friendship which exists between two men, George and Lennie, and the hostile environment of America during the American Depression. But, the main two themes of `Of Mice and Men’ were loneliness and prejudice.

Don't use plagiarized sources.
Get Your Custom Essay on The theme of loneliness in ‘Of mice & men’ Just from $13,9/Page

Steinbeck raises questions in the mind of the reader that the novel would be based on loneliness. The first line read “A few miles south of Soledad”. This is a clever idea by Steinbeck as “Soledad” means loneliness in Spanish. The title “Of Mice and Men” may be seen as a warning for the whole novel as it came from Robbie Burns’s poem “To a Mouse” which translates as `no matter how well be plan the future, things often go wrong’.

The setting of Steinbeck’s novel is very important because the date when the novel took place was in 1929, around the time New York Wall Street stock market collapsed, resulting in the dollar becoming worthless. Unemployment was high at this time and men had to move around a lot looking for work, which meant they were never in one place long enough to form any relationships, so this was a very lonely existence.

Steinbeck shaped the ranch where George Milton and Lennie Small worked in as an isolated and primitive place. Steinbeck uses his personal experience as a ranch worker to describe how the working men at the ranch felt in the novel. George says that “ranch workers are the loneliest people in the world and don’t belong nowhere”.

Steinbeck also portrays loneliness through characterisation. He uses sexism, racism and ageism to get his message across.

One example of this is when George meets the old, decaying Candy and his antiquated dog, he tells him about the “black” man called Crooks. Candy stated to the inarticulate George “give the Stable Buck hell. Ya see the stable buck’s a nigger”. This was typical of 1930’s America as black people were thought of as inferior to white people. This suggests that Crooks was friendless. He has his “own bunk in a separate nigger room” and “he scattered personal possessions around the floor; for being alone he could leave things about”. Crooks is obviously suffering from racial discrimination as he is the only black man on the ranch and is not allowed in the bunkroom with the other men because of his colour.

He therefore, had a very lonely existence.

Steinbeck also uses Candy to portray loneliness. The disconsolate Candy becomes lonely after his beloved dog was shot. The men in the ranch describe the dog as a “stinking hound” and an “old b******d”. Candy feels dejected as he says “I wish somebody would shoot me when I become useless”.

This proves that Steinbeck describes Candy as lonely character.

Perhaps the loneliest character, which Steinbeck creates in the novel, is Curly’s wife. She is the only female in the ranch and although she is married, you never witness the distinct couple of Curly and his wife together; they are always searching for each other. Curly’s wife is lonely and, as a result of this, she was endlessly trying to make friends with George and Lenny. She tries to convince Lennie to speak to her despite what George was declaring. Curly’s wife remarked, “You can talk to me, don’t listen to George”.

But, Lenny didn’t agree with what she has to say. Another piece of evidence, to suggest that Curly’s wife is lonely is that she had no name! This proves that no one ever stays long enough to get to know her. Curly’s wife also flirts with the male workers of the ranch to seek attention. The workers think she is a “tart” but she is an insecure, lonely woman and this is shown when she tells Lennie “I never get to talk to anyone, or else, Curly gets mad”. My personal opinion is that Curly’s wife married Curly for company, not for love.

Steinbeck illustrates Slim to say to George and Lenny “I’ve never seen a couple like you two before. It is not normal in this area”. You never read about Slim in abundance which must also indicate he is a lonely character.

Another example which Steinbeck uses to illustrate why these men are lonely was when Whit describes that he has a friend who was in a magazine; he said, “Do you remember Bill Tenner. He worked here three years ago?”

This emphasizes how these ranch workers never developed relationships.

Steinbeck uses George and Lennie as a contrast because they are the only people to have anyone to talk to. To demonstrate this, Lenny exclaimed “But not us because………because I got you to look after me and you have got me to look after you and that’s why”.

The last line that Steinbeck wrote read, “Now what the hell ya suppose is eatin’ them two guys”. Curly isn’t used to being with someone for so long as he does not understand why they were depressed.

In conclusion, John Steinbeck expertly portrays the theme of loneliness in “Of Mice and Men” in an interesting and original manner. I thoroughly enjoyed reading this book.

The theme of loneliness in ‘Of mice & men’. (2016, Jul 21). Retrieved from https://studymoose.com/the-theme-of-loneliness-in-of-mice-men-essay 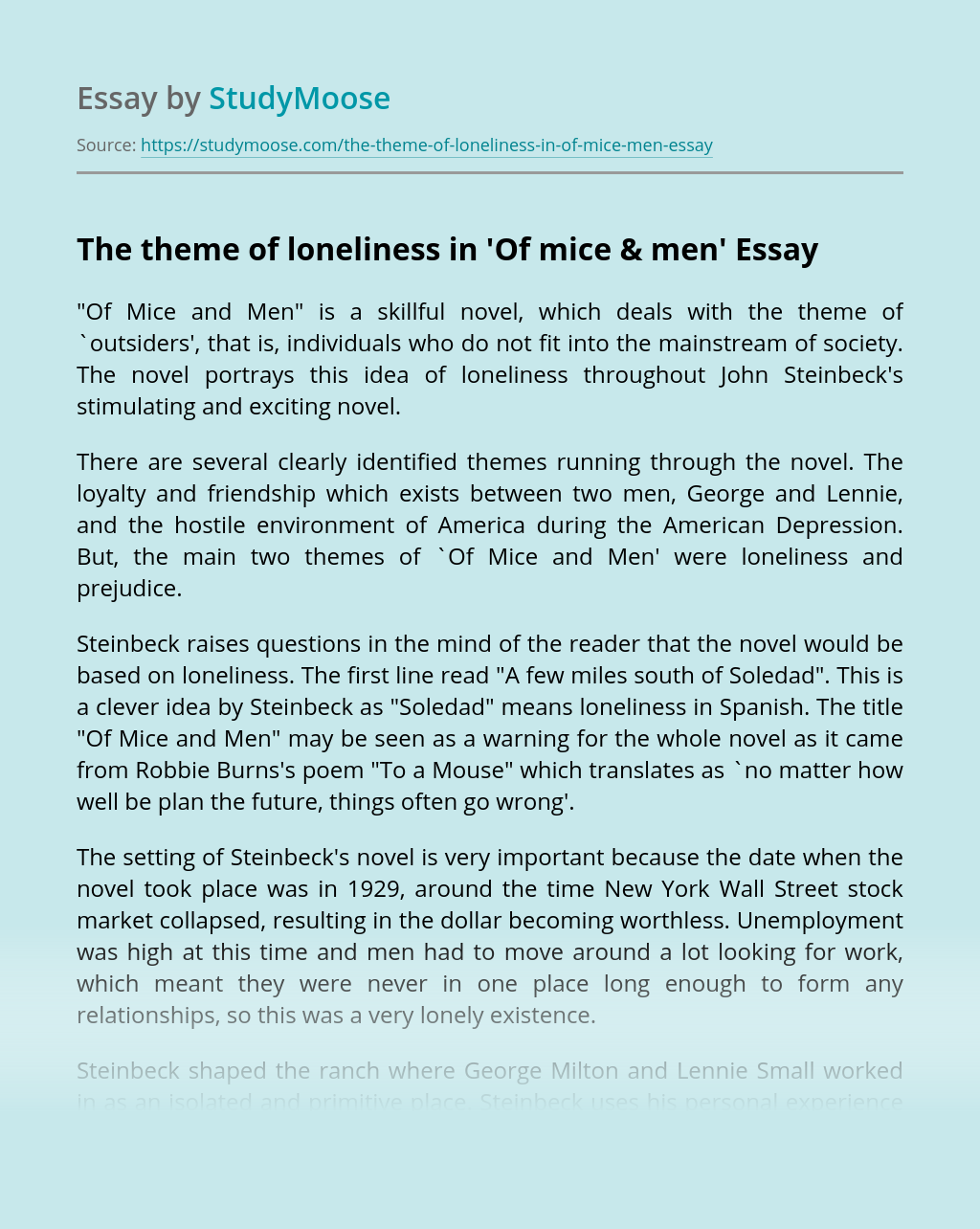 Compare and Contrast Lennie and Crooks

The ending to 'Of mice and men' is tragic yet inevitable

One of the main aspects in John Steinbecks ‘Of Mice and Men’ is inevitability. Of Mice and Men is the story that two migrant workers follow, in order to achieve their dream. The main features in the novel are: The slow but sure shattering of the dream, and how it keeps going wrong due to...

The Novel ‘Of Mice and Men’ was written in 1937 by John Steinbeck. It is the most touching tale about the relationship of two men, George and Lennie who are faced with difficult situations at times which are Steinbeck’s aspects of his life seeing as there are the main characters of the novel. On the...

Importance of dreams in the novel of 'Mice and Men'

The novel ‘Of Mice and Men’, written by John Steinbeck is a truly fascinating novel based upon the theme of dreams. This novel was published in 1937, which was towards the end of ‘The Great Depression’ that hit the United States. The novel was set in Soledad, California, during the same time period as published....

Role of Women and Symbolism in of Mice and Men

Crooks is symbolic of dignity in the novel Of Mice and Men by John Steinbeck. Dignity describes the sense of self-respect and self-worth, along with physical and psychological integrity and empowerment. Steinbeck shows Crooks as a symbol for dignity and pride in midst adversity when he draws himself up and will not “accept charity” from...