The Rich Get Richer and the Poor Get Prison Book Review

Authored by Jeffrey Reiman, The Rich Get Richer and the Poor Get Prison basically talks about the criminal justice and other relevant trends in the system

He practically based the content of his book on the insights that he gained from his colleagues in the university where he worked.

Reiman bluntly stated his thesis statement right in the Introduction of the book. He wrote that the genuine aim of the American justice system is not actually to eliminate the cases of crime in the country but rather, to blame or put the stigma to the poor.

Don't use plagiarized sources. Get your custom essay on
“ The Rich Get Richer and the Poor Get Prison Book Review ”
Get custom paper
NEW! smart matching with writer

The present American system on criminal justice is concern over the “maintenance” of the image of the poor as the ones who are always committing crimes.

The American criminal justice system wants to maintain the high percentage of the poor population who committed crime.

To prove his claim, through his students, he came up with a correctional system that would make a group of criminal stable and visible instead of reducing or eradicating the cases of crimes.

They came up with the following suggestions:

Meanwhile, in the chapter, “Crime Control in America,” the author suggested was actually designed to fail. He backed up his claim by saying that cases of drug abuses could not be merely reduced by putting in jail the arrested drug users. He added that the decline in the commitment of heinous crimes could not really be due to the strict implementation or reinforcement of the existing laws but rather due to the changing demographic characteristics in the society.

Reiman furthered that cases of crimes could actually be reduced if we really want to. He explained that we are just too full of excuses to do what we should be doing to reduce the cases of crimes.

We are aware of the existing problems in the society like prison, drugs, and poverty yet we do not do something about it. He suggested that we all have the power to ban guns and decriminalize drugs to prevent all of these to happen.

By any other name

In addition, in the chapter, “A Crime by Any Other Name…,” he stressed that work-related deaths that should have been prevented should also be considered as crimes.

The existing criminal justice system, he argued, could be viewed as: “male, poor, young, and black.”

The system also hides the “white-collar” crimes. He viewed that the existing criminal justice system only considers the personal assaults as crimes not concerned over carelessness as a form of crime. Reiman furthered that in the workplace, like in the hospitals, there are actually high risks of committing crimes.

He added that even the use of chemical by some giant companies could also be considered as a form of crime.

Reiman felt that the criminal justice system does not really know what is detrimental to the society.

The poor goes to prison

Circumstances would expose that poor criminals are those who are usually immediately arrested and imprisoned while the rich or the wealthier who committed crimes would just be merely warned. Reiman used several evidences to back up his claim that there is indeed different treatment for the Blacks who committed crimes.

The evidences that he presented are as follows:

Reiman said that the economic status of an individual may be an advantage for not committing a particular crime. He observed that the police, judge, and prosecutors would most likely send a poor criminal to jail rather that the wealthy ones.

Even when the wealthy criminals are arrested and jailed it is rare that they would do or endure particular sufferings that the convicted poor criminals undergo.

In the book’s chapter, “To the Vanquished Belong the Spoils,” Reiman discussed why criminal justice is not successful in addressing the problems of crimes. He found out that the failure of the criminal justice system to fulfill its role is not merely by accident but because of the intention of the wealthy to keep the system as it is.

He said that the poor are only victims of this social predicament. Because the poor do not have the money to change the system, they are being left behind as the major perpetuator to crimes. They do not have the means of initiating change in the rotten criminal justice system.

He also stressed that the existing criminal justice system put a particular stereotype among the poor. The society would usually view the poor as those who would engage their selves in crimes.

The existing criminal justice system has equated crime to the poor.

In ending the chapter of his book, he said that the society is just embracing the system of social equity especially in the area of criminal justice.

For Reiman, instead of protecting the rights and welfare of every member of the society, it rather promotes discrimination in the criminal justice system.

I would like to agree to the claims of Reiman that there is an evident discrimination in the America’s criminal justice system.

The situation of the criminal justice system would prove his claim. We cannot deny the fact that we usually perceive crimes as usually committed by the poor. Whenever we heard stories of crimes committed by the wealthy ones, we are usually concerned over them or give them the benefit of the doubt.

Although there are existing local laws that gives and promotes equality in the treatment of criminals, the reality, however, is not observing what is right.

Since time immemorial, there have been certain judgments and stereotypes that we pass among the poor, especially the poor Blacks. Also, there actually “special treatments” being rendered to the wealthy who have committed crimes. We do not see them being swarmed inside a prison cell. We usually see the poor or the Blacks suffering the “hardships” and “sufferings” of the criminal justice system.

Reiman’s The Rich Get Richer and the Poor Get Prison is just a representation of the sad reality hounding our society. I think his work is just a mirror of what could be seen in the society. Reiman’s book just exposed how unfair and anti-poor the extisting crminial justice is in the United States—or in other countries as well.

The government should do something about it. They should not only serve the interests and welfare of the wealthy. After all, the poor and the Blacks are also their constituents. The wealthy should not, in any way, manipulate the criminal justice system through their money and power.

There should be justice for all—no matter what his or her economic and social strata is.

True enough, it is upon us if we really want to change this rotten system.

The Rich Get Richer and the Poor Get Prison Book Review. (2017, Mar 24). Retrieved from https://studymoose.com/the-rich-get-richer-and-the-poor-get-prison-book-review-essay 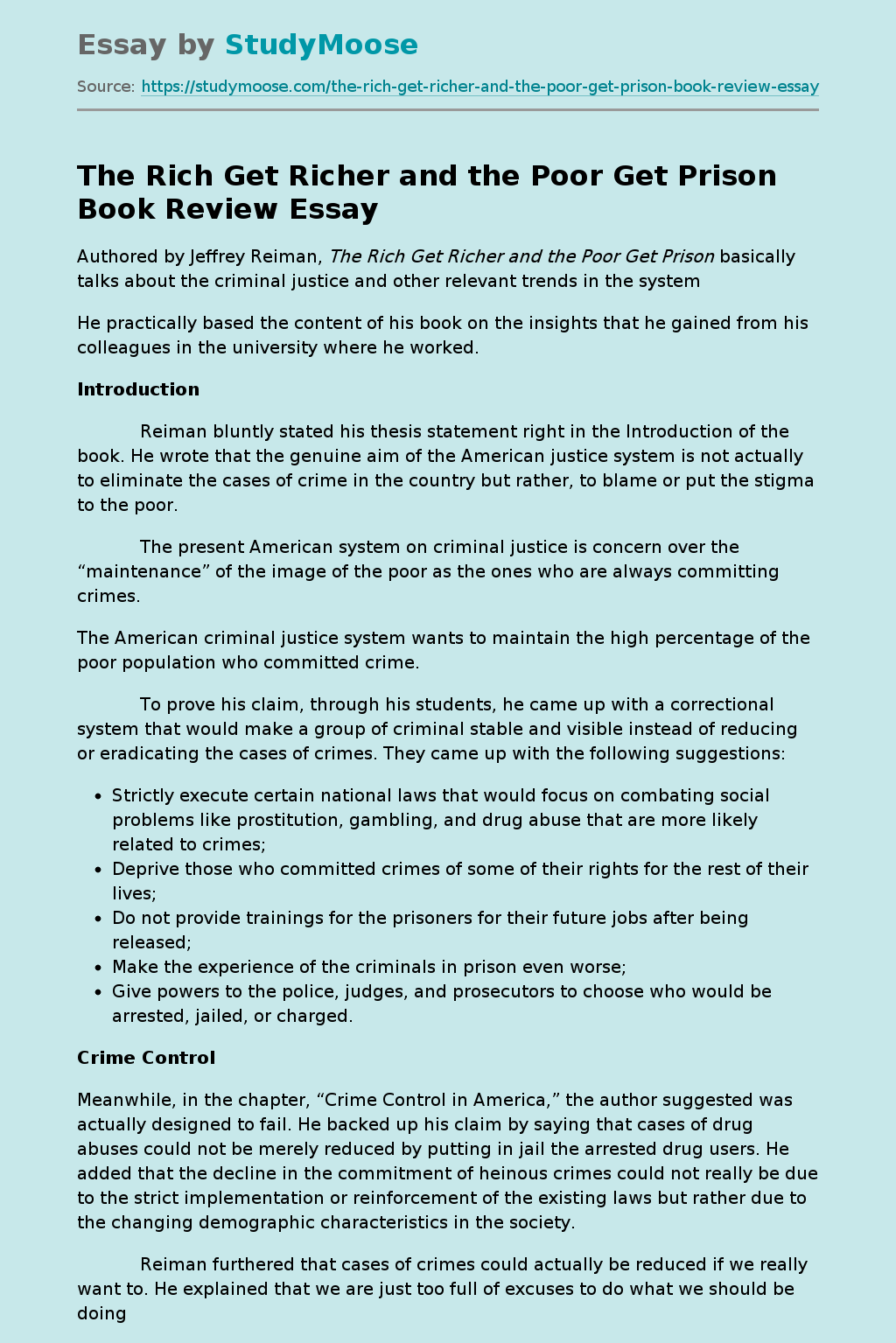