Gap between Rich and Poor

The issue of gap between rich and poor has still been significant over recent decades in our society. At present, the article “Issue Area: Gap between Rich & Poor”, Joyce deBoer and Ryan Warmouth inform growing gap between rich and poor will pose unstable feature for society in the near future by surveying and comparing the statistical evidences from Golden and Area A. In addition, authors hope this issue must be mentioned by the society and anticipate it will be controlled by developing policy.

Don't use plagiarized sources. Get your custom essay on
“ Gap between Rich and Poor ”
Get custom paper
NEW! smart matching with writer

While others researchers state that growing gap between rich and poor can enhance the competition of the entire society.

By looking through this article, I claim that growing gap between rich and poor without control will pose serious threaten for the local stability and development. In this article, writers indicate the case of growing gap between rich and poor in Golden – Area A by filing plenty of data. Initially, authors select Golden and Area A which has a stable middle class as a sample.

Moreover, authors think analyses have constraints as a result of some elements, such as “back-to-the-Landers” in the Columbia Valley. Then, authors illustrates overall poverty rate in term of LICO and LIM and make a comparison between Golden – Area A and British Columbia.

Also, writers describe the impact of community growth on the gap, such as the increasing price of house and food. Then, talk about household incomes in disparate levels. Ultimately, the article concludes that growing gap between rich & poor can impact the diversity and stability of the community.

For growing gap between rich and poor, those who argue that it can cause the enhancement of the competition for the society my build their view on such an assumption that this gap can be considered one motivation for lower income class, who want to be higher class.

Obliviously, growing economic gap can cause the the evolution in some sense. Even so, this view should be too idealized for the current intense social competition. In my opinion, it has detrimental influence in aspects local stability and evolution. According to the description of the article, this issue can cause the local wealthy people can change to be rich increasingly and have adequate money to buy the local tracts and stores. In addition, along with the huge immigration of the new comer, the majority of them are wealthy or retired.

Thus, the local rich people increase the price of land and food for high interest from immigrants. However, the local income does not grow, thereby causing the economic burden for local young people and low income earners. Apparently, this tendency causes the rich people more abundant. But, it can also cause the growth of criminal rate in the local. On the other hand, an increasing number of people can no longer afford to live there and move out to others place, thereby causing the loss of local labor force. This can impact the evolution of local economy.

To sum up, growing gap between rich and poor have drawbacks for local stability, which cause the high burden live for local young people and low income earners. On the other hand, it can also bring about the loss of local labor force. I would concede that growing economic gap can create the competition of the society. Despite that this opinion should be too unreal. This article talks about the Canadian area has lived in the gap rich and poor. However, under financial crisis, this issue has already altered to be severe in some developing country. Afterward, I will research some articles about this problem in developing country.

Gap between Rich and Poor. (2016, Oct 28). Retrieved from https://studymoose.com/gap-between-rich-and-poor-essay 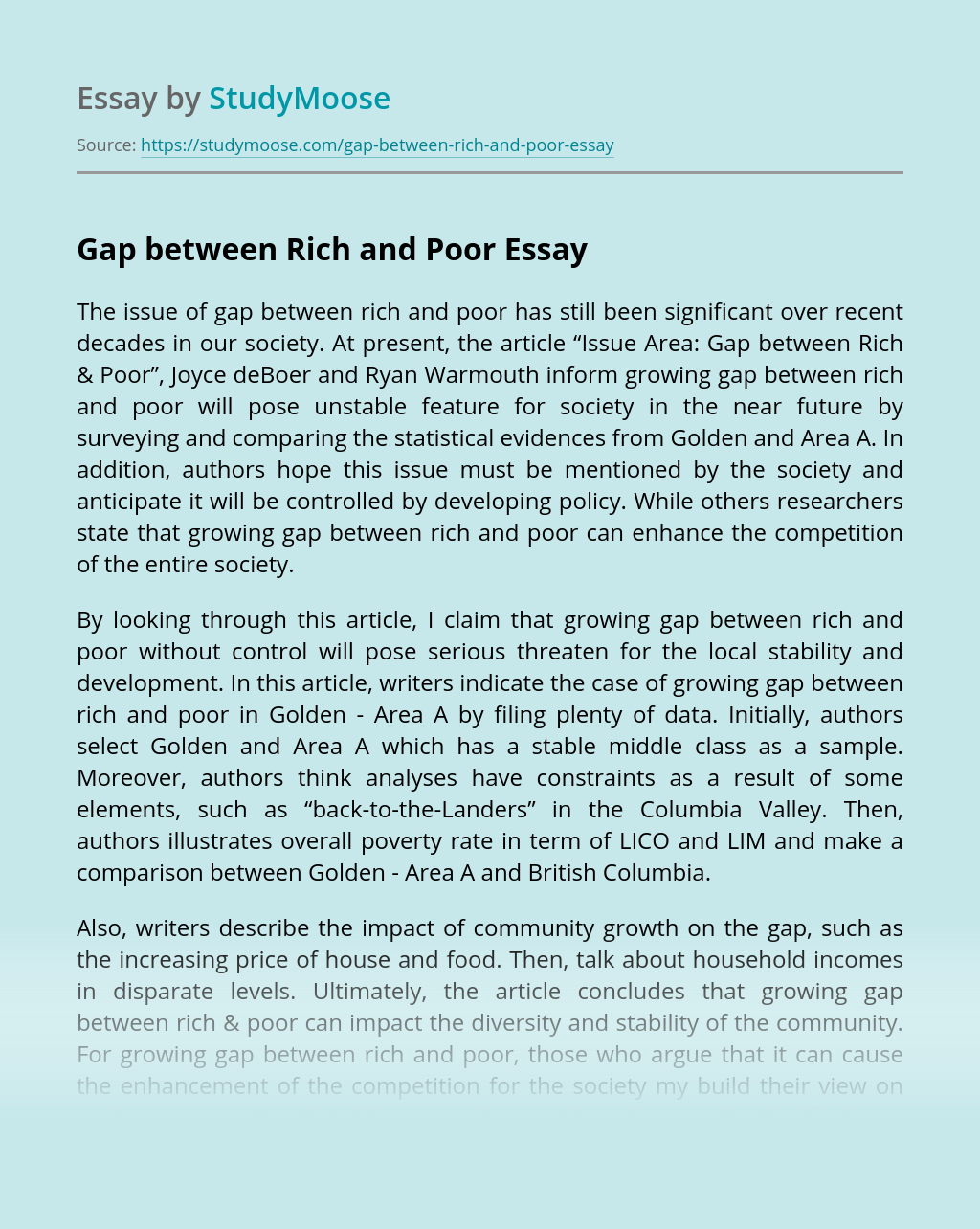