Communications styles have always been different between men and women. As children our communications styles have been taught to us. According to John Gottman “Boys learn to suppress and bury their feelings, especially fear and other emotions that make them feel vulnerable. Girls are encouraged to express and talk about their feelings. ” (whymarriages). Women and men may share some similarities but, we can all agree that when it comes to the aspects of communication there is a significant difference. Since childhood the communications between men and women have been different.

Don't use plagiarized sources.
Get Your Custom Essay on Gender Differences in Communication Just from $13,9/Page

This is evident in the upbringing of males and females “Boy and girl infants are treated differently by both parents. Both mom and dad speak louder voices to boys, caress and coo at girls more, show greater facial disapproval to girls’ anger, and use more aggressive physical play with boys. ” (Lathrop) When boys are raised they are taught certain aspects of a relationship are not as important whereas, with women that is the main focus.

For example, “Typically, boys are not taught skills relating to intimacy and emotions while girls are carefully taught to focus primarily on these. (Lathrop) Although, that is what boys are taught it’s all based upon how the parents raise or model “correct” behavior at a young age. But, boys are naturally problem solvers unlike women.

When men are communicating they come into the conversation looking for solution to the problem at hand. According to Marlene Lathrop, “Boys develop visual-spatial-logical and problem-solving skills sooner than girls and tend to talk about things and activities, while girls develop talking-reading-vocabulary and interpersonal skills sooner than boys and tend to talk about people, feelings and developing friendships. (Communicationsstyle) Unlike men, women are not the problem solvers, they are more sensitive and emotional when it comes to communication women relate more to the emotions of the issues rather than the logistics like men.

Women are and Men are very different non-verbally when it comes to communication. Body language in communication is one of the biggest factors. If you ever notice if you argue with a male, they never look at you in the eye. This is because men take direct eye contact as a threat and a challenge, when they feel challenged or threaten the communication becomes less effective.

Studies say that the best place to argue is in the care, this is because it avoids the eye contact which is usually a threat to men. This is proven by Tonya Reiman who says “for men, a face to face position indicates challenge or confrontation” (Genderdifferences) You rarely ever see two men sit face to face or talk to one another making direct eye contact . But; Women are noted to be more sensitive and “touchy” when using non-verbal communication “women are considered to be more nonverbally warmer than men with a tendency to smile and lean towards others during conversation” (Rieman).

Ever notice when women communicate what’s the first thing they say “Look at me when I’ talking to you! ” This is because women take direct eye contact as a way of saying that the other person is listening to them as women we are active listeners unlike men. For example, “Women sit face-to –face with other women or stand closer, indicating a more open and intimate position that help them connect with one another. ” (Reiman). Nodding and direct eye contact is a sign of understanding and as women we need that in order to achieve the connection that is trying to be made during communicating.

Because women and men are raised differently non-verbal communication goes back to what they learn in childhood. For example; “In the first few years of life girls are more used to physical touch by their mothers during childhood compared with boys. Women therefore use touch to express caring, empathy and emotions. Men are seen as being more competitive and verbally assertive due to childhood influences of toys such as guns and swords” (rieman). The dreadful words to men “Let’s talk about it” may be like nails to a chalk board.

But, to women it is a way of expressing and making a connection. Because men are automatic problem solvers they see this as a women looking for a solution to a problem and bypass the unimportant information and straight to the point. According to Deborah Tannen’s book “You Just Don’t Understand” she notes that Tannen notes that men are confused by women’s use of conversation to be intimate with others. Tannen describes this as “troubles talk. ” She says, “For women, talking about troubles is the essence of connection. I tell you my troubles, you tell me your troubles, and we’re close.

Men, however, hear troubles talk as a request for advice, so they respond with a solution. ” When a man offers this “here’s a solution” to a woman it becomes as though the man is dismissing her and all things that she has previously said had no importance to him what so ever. However, with men they keep their problems to themselves a good majority of the time and men often go to other men just seek just advice nothing more and nothing less. Men and women have significant differences when it comes to communication styles.

According to Tonya Reiman, “The communication style of women has been described as being more emotional than men. Women focus on feelings and building relationships while men focus on power and status. ” (Genderdifferences). This statement is true because as women we are more emotional than men. A lot has to due back to how men and women are raised during childhood. Men are straight forward and to the point when it comes to communicating, they communicate to share information and converse in a very assertive and direct manner which is not what women do.

With women they are more sensitive and more willingly to express how they feel and show more empathy rather than men. The communication style of men is to establish and maintain status and dominance, whereas with women’s communicating it is more open. When women get together they seek feedback of the other women present and make decisions based on a group based decision. Because men have a different communication style than women it sometimes clashes with the needs and wants when they communicate with one another.

Women do not understand that men are all about dominance and status when it comes to communication, women are all about feeling which sometimes turn men off to what they are saying. According to Tannen,” men converse with a focus on achieving social status and avoiding failure, while women focus on achieving personal connection and avoiding social isolation. Men want to report, women want rapport. Not that men don’t value involvement or women status, but these aren’t as important for either”. (Youjustdont).

In closing, Men are from Mars and women are truly from Venus especially communication wise. Neither gender truly understands where one another is coming from dealing with communication. A lot of the differences stem from childhood and society’s “correct” way of raising different genders. If we really sat back and truly analyze what we are doing when it comes to raising our men and women we can truly see how we are not helping but damaging. Because men are taught to keep their feelings inside it makes it difficult not only for the man but the women also. 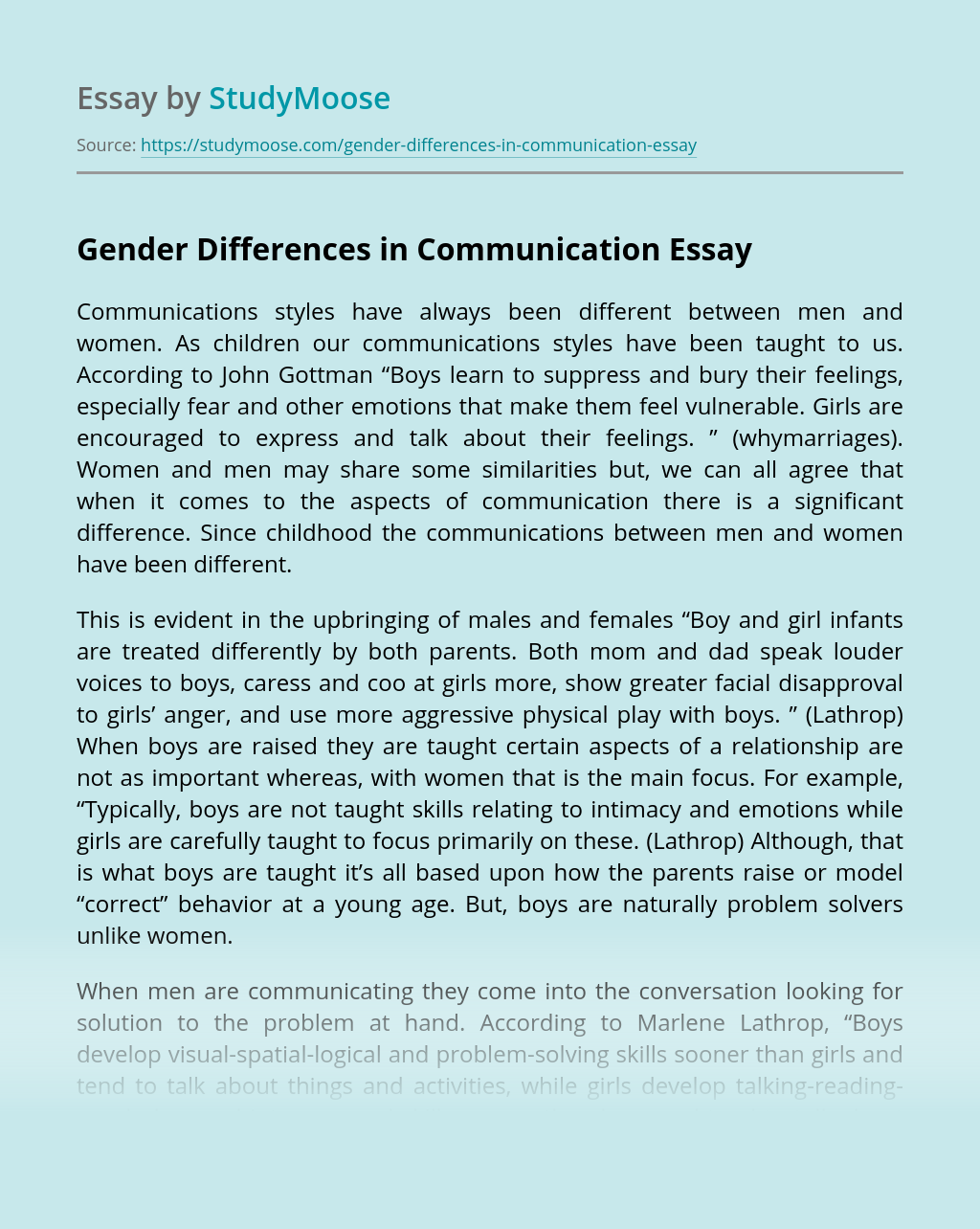 View sample
Get Essay
Effective Communication: How Not to Be Misunderstood

Communication misunderstandings happen all the time in business communications, and the consequences can range from annoying to terrible. Here are some simple rules to follow that can save you a world of trouble when communicating with colleagues and partners. Active listening Active listening is one of the best ways to effectively communicate with others. In...

Communication Organizations in the modern era are complex social systems which can not function effectively and efficiently without proper interaction between its employees. Communication is a process through which all the employees in an organization are linked together. Communication is, “a communion by words, letters, symbols, or messages and as a way that one organization...