Barangay is the “simplest unit of Local Government Unit. They handle a small community like purok or sitios. All places in the Philippines consist of this small LGU unit and barangay officials.”

“When the Spaniards began their 1951 Philippine adventure; there was no central Philippine government. But Filipinos then already have a system of government for they lived in groups of about a hundred to a thousand people in villages that could support themselves and their beasts of burden which called barangay.

Don't use plagiarized sources. Get your custom essay on
“ The Punong Barangay ”
Get custom paper
NEW! smart matching with writer

The term barangay was derived from the word “balangay” meaning boat. Barangay was led by an elder, warriors and a chieftain sometimes called Datu, Hari, or Rajah, Lakan or Sultan (in Muslim community) or any name which connotes the leadership. They were usually the strongest or oldest warrior with absolute powers; they often had the power of life and death over their subjects. They ruled like despots but their actions were also limited by customs and tradition to which they generally adhere.

After Miguel Lopez de Legazpi conquered the better known Filipino barangay chieftains, the barangay were called barrios by the Spaniards. They became the political subdivision comprising a town and ultimately the basic political unit in the Philippine. But their leaders were called Cabezas de Barangay. When the Americans came at the turn of the century, leaders of barrios were called Tenientes del Barrio. Both Cabeza de barangay and Teniente del barrio were appointed officials to oversee tax collection, report rebel activities to higher authorities and settle disputes in the barrio level.

Throughout the Philippine history, whether in the Spanish, American or Japanese periods and even up to the post Second World War era, the barrio had been the smallest local government unit in the Philippines. It was only during the Marcos martial law regime that, by virtue of Presidential Decree No. 557, “WHEREAS, the Barangay was the basic political unit existing in the Philippines before the arrival of the Spaniards; WHEREAS, it was through the Barangays that our forebears consulted on matters of community interests; WHEREAS, the revival of the Barangays under Presidential Decree No. 86 has contributed considerably in awakening the interest of our people and broadening their participation in government affairs, the conduct of their officials, and other matters of public interest; WHEREAS, the term “barrio” is of foreign origin and consequently there have been various representations from the Barangays all over the country to declare all barrios as Barangays:”

Both the 1986 Provisional Constitutional and the 1987 Constitution recognize the barangay as the basic local government unit in the country. 4“As a basic political unit, the barangay serves as the primary planning and implementing unit of government policies, plans, programs, projects, and activities in the community, and as a forum wherein the collective views of the people may be expressed, crystallized and considered and where disputes may be amicably settled.”

5“There shall be in each barangay a punong barangay, seven sangguniang members, the sangguniang kabataan cahirman, a barangay secretary and a barangay treasurer.” The Punong Barangay is the executive head of the smallest unit of the government. He or she is in charge of the governance, development planning, basic services and facilities, compliance to directives, barangay legislation, and fiscal administration. People are required to respect the barangay head’s decision and rules implemented. On the other hand, a barangay chairman may have the power to lead one barangay, but he/she must still follow the law. A punong barangay is also responsible for implementing all ordinances, resolutions and laws in the barangay.

They are in charge of governance, financial stability, development provisioning, leading the barangay legislation or workforce and ensuring peace and order within the community. He also acts as liaison between his community’s people and higher government officials such as city or municipality mayors and province governors. They control all meetings and assemblies with the barangay officials, help with the mayor’s government obligations and facilitate all basic services in accordance with the law. Punong barangay have the power to appoint and remove barangay officials. They organize community programs, facilitate fund-raising activities and promote the welfare of their community. They make sure that everyone is orchestrated towards the improvement and the betterment of the barangay, their properties, cleanliness and orderliness.

No other elective official is as exposed as him to routinary problems of barangay society; he is expected to attend personal problems or conflicts among barangay members, receiving representatives to higher government authorities, aside from exercising his powers and duties. Consistent with ancient Filipino tradition, he is respected by young and old barangay member.

General Problem: How does the Punong Barangay perform their duties and responsibilities?

Significance of the study

This study can contribute and help the acting leaders or the next generation leaders of barangay in improving their leadership performance. This research study can also help to have a better understanding and guidelines on how punong barangay perform their duties and responsibilities. Its significant findings can be used as a reference for scholars, researchers, leaders and students with similar interests. Scope and delimitation

The focus of this study is to determine the performance of Punong barangay during their term of office in selected barangay in the 4th district of Manila.

This paradigm will show the concept of the proposed study in which the approach to ideas are explain to reach the necessary amount for the resolution of the problem.

These functions of the barangay chairmen were used by the researcher to rate the performance of the punong barangay.

The Theory of Performance by Elizabeth Bell develops and relates six foundational concepts to form a framework that can be used to explain performance as well as performance improvements. To perform is to produce valued results. A performer can be an individual or a group of people engaging in a collaborative effort. Developing performance is a journey, and level of performance describes location in the journey. Current level of performance depends holistically on 6 components: context, level of knowledge, levels of skills, level of identity, personal factors, and fixed factors. Three axioms are proposed for effective performance improvements. These involve a performer’s mindset, immersion in an enriching environment, and engagement in reflective practice.

To perform is to take a complex series of actions that integrate skills and knowledge to produce a valuable result.

Humans are capable of extraordinary accomplishments. Gandhi led a nonviolent revolution that liberated India from colonial rule. On September 12th, 1962, JFK challenged the country to “go to the moon in this decade and do the other things, not because they are easy, but because they are hard, because that goal will serve to organize and measure the best of our energies and skills…” Wonderful accomplishments also occur in day-to-day practice in higher education. An advisor inspires students to follow their dreams. A teacher magically connects with students. A researcher continually asks the quintessential questions that lead to revolutions in thinking. A dean inspires an entire college to collaborate and attain wonderful outcomes.

Since worthy accomplishments are produced from high-level performances, a theory of performance is useful in many learning contexts.

As a manager advances his level of performances, he is able to organize people and resources more effectively and to get higher quality results in a shorter time.

As a teacher advances his levels of performance, he is able to produce deeper levels of learning, improved levels of skill development, and more connection with the discipline for larger classes while spending less time doing this.

As an actor improves his level of performance, he is able to learn parts quicker, play more varied roles, and produce a deeper and more meaningful impact on audiences.

Performance advancing through levels is shown in Figure 2 where the labels Level 1, Level 2, etc. are used to characterize effectiveness of performance. That is, a person or organization at Level 3 is performing better than a person or organization at Level 2. As shown on the right side of Figure 1, performing at a higher level produces results that can be classified into categories: Quality increases—results or products are more effective in meeting or exceeding the expectations of stakeholders Cost decreases—amount of effort or financial resources to produce a result goes down; amount of waste goes down Capability increases—ability to tackle more challenging performances or projects increases Capacity increases—ability to generate more throughput increases Knowledge increases—depth and breadth of knowledge increases Skills increase—abilities to set goals, persist, maintain a positive outlook, etc. increase in breadth of application and in effectiveness Identity and motivation increases—individuals develop more sense of who they are as professionals; organizations develop their essence.

For clearer understanding of the terms used in this study, below are their meanings:

Basic services – services designated to provide the basic needs of the people.

Governance- The action or manner of governing.

Government – The system by which a nation, state, or community is governed.

Leadership – The action of leading a group of people or an organization.

Local Government -the administration of a particular town, county or district, with representatives elected by those who live there.

Performance- e administration of a particular town, county or district, with representatives elected by those who live there.

Presiding officer- the leader of a group meeting.

Punong Barangay – head of the barangay

Sanguniang barangay – The Sangguniang Barangay is the legislative body of barangay governments in the Philippines Social services – These are services that provides the social needs of the people. (e.g. presence of social facilities.)

The Punong Barangay. (2016, May 08). Retrieved from https://studymoose.com/the-punong-barangay-essay 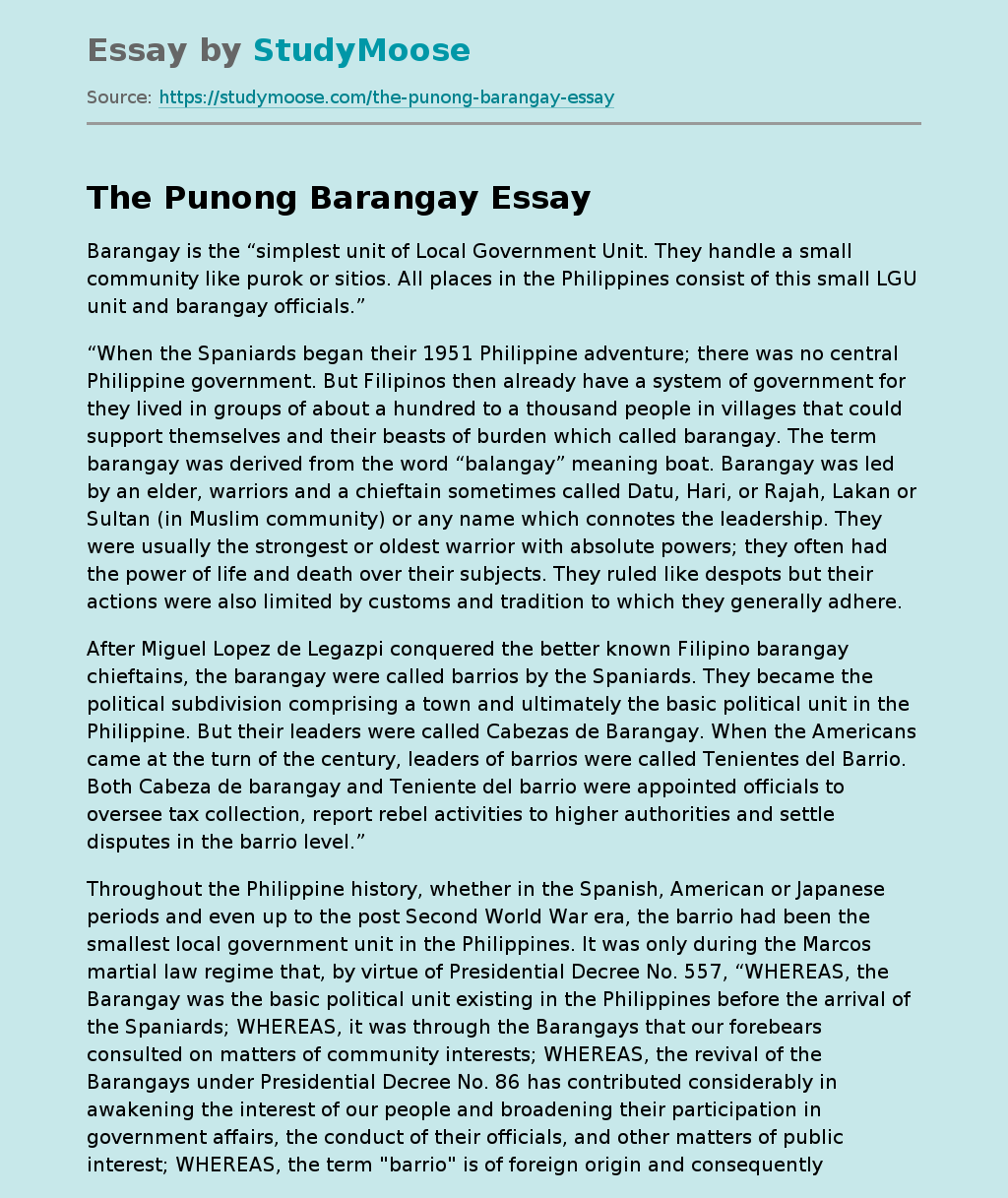