Don't use plagiarized sources. Get your custom essay on
“ GMA Maderan History ”
Get custom paper
NEW! smart matching with writer

until his death in 1978. Nelson Gutierrez was appointed as brgy.captain on March 25,1985 by virtue of legislative and administrative act, a referendum was held for the creation of (27) brgy. out of original (10)brgys. of the municipality of General Mariano Alvarez,Cavite. Brgy.Area J was then divided in four brgys. namely;

Brgy.Gavino Maderan,Brgy.Jacinto Lumbreras,Brgy.Severino Delas Alas and Brgy. Ramon Cruz Sr. By the virtue of Barangay Resolution no.13-5-2005,approved by the Sangguniang Barangay on its session dated June 5 2005. July 5 was declared as the foundation day of Brgy.Gavino Maderan and then on the year 2006, the said resolution was adopted by the Sangguniang Bayan of the municipality of Gen.Mariano Alvarez Cavite.

General Mariano Alvarez,the youngest town of the province of Cavite is formerly a part of the municipality of Carmona.

This municipality was named after Gen.Mariano Alvarez,one of the foremost sons of the province.He was a native of the town of Noveleta and he played a vital role during the Spanish Revolution. It was previously called Carmona Resettlement Project and was under the direct management of the People’s Homesite and Housing Corporation (PHHC). On July 3,1968, the first seven families were admitted in the project.

The Dept.of Social Welfare provided them with free 3-day food rations for one month, the Dept.

of Health set up medical clinics with the Dept.of Education started holding classes on the Elementary and Second levels. As envisioned by the National Government, GMA, a former relocation area for the squatters of the Metropolitan Manila, will provide its residents with a more blissful life geared towards the full development and upliftment of the relocation itself. Today,as a developed community through the untiring effort of the municipality officials,Gen.Mariano Alvarez is classified as a first class municipality. 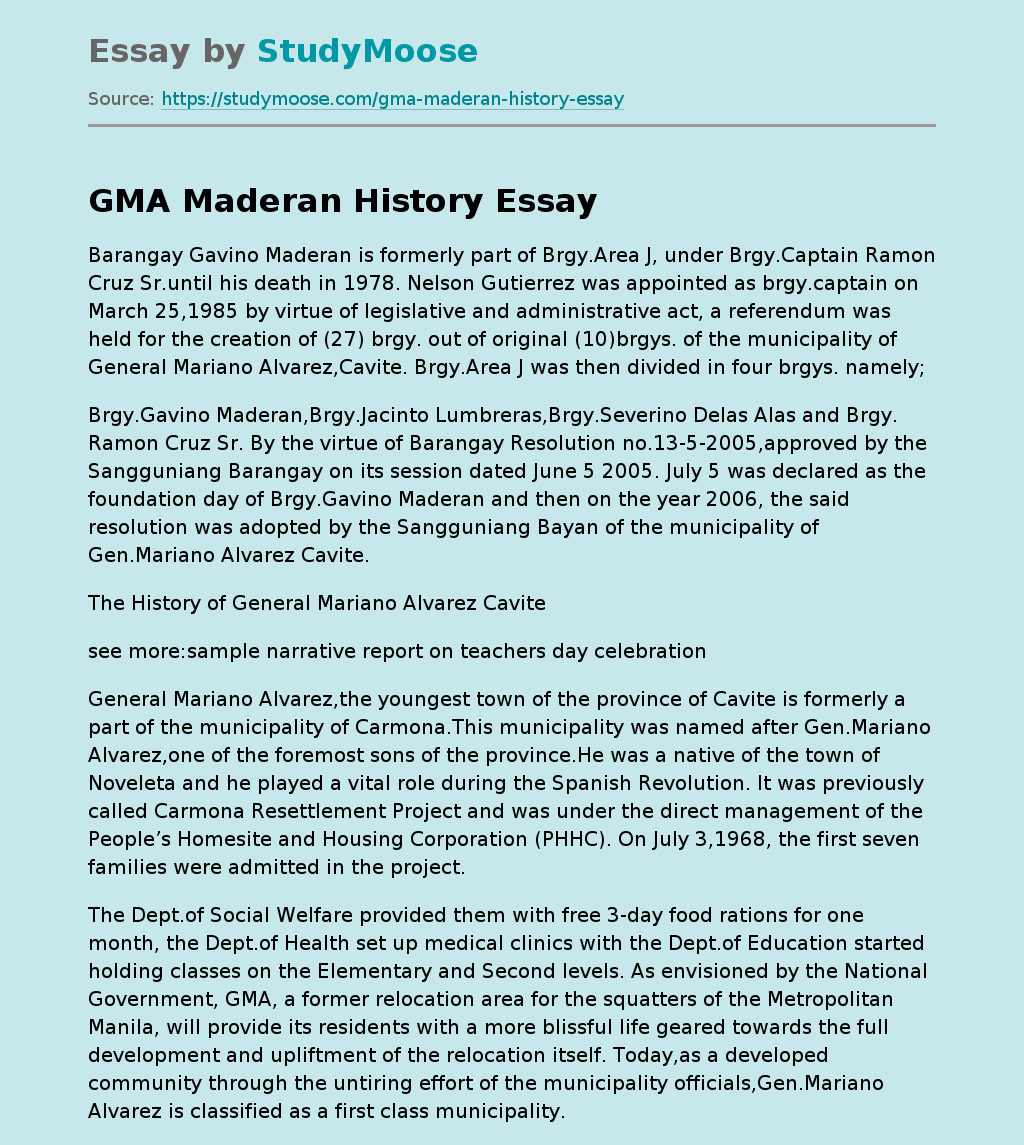