Computer technology has been widely used in different fields, nowadays; computer is the main system that is being used from large and wide scale manufacturing up to small scale industries. The defining feature of modern computers which distinguishes them from all other machines is that they can be programmed. In recent times, the world has witnessed a rapid increase in technological innovations. This era ushered in the advent of the electronic computer system among other modern technologies. At present the computer technology has permeated nearly all aspects of human organizational roles and education.

Don't use plagiarized sources. Get your custom essay on
“ Report Generator for Bayanan Barangay Hall ”
Get custom paper
NEW! smart matching with writer

Computer encompasses almost all facets of human endeavors. So much has been written on it and its relatedness to all areas of human disciplines, which include computer/information technology, engineering, agriculture etc. However, in the field of case records their role is much less well defined, for here the organization of data as a preliminary to computer input is the real stumbling-block.

Barangay Bayanan is one of the barangay in the City of Muntinlupa.

It is bounded between Barangay Alabang and Barangay Putatan. With residents for about 35,865 the hall is strategically located along Bayanan Bay walk, Muntinlupa City. Transactions are currently done manually wherein, information about the citizens are being process by just simply writing the citizen’s name, age, location and other personal information. Producing report such as Barangay Clearance, various certificates etc. is done manually by ink and paper, which is very slow and consuming much efforts and time. Furthermore, the duplication of produced report to each citizen is often result to data management problem such as slow processing, inaccuracy of report and many others.

These problems are typical of a manual or traditional system. This research aims to consider a computerized report generator is needed to avoid redundancy and to quicken the generation of reports from the replacement of the current manual system.

The general objective of the study is to design and develop a report generator that would serve as proposal to help Bayanan Barangay Hall to their operation and provides an easier, faster, more organized, secured, and accurate system. The specific objective of the study is to identify the problems encountered by Bayanan Barangay Hall and also create a report generator that will improve the scope such as citizens, staff and administration.

For its limitation, the study is limited only to citizen-data entry person transactions. The inventory report, payroll of the staff and the payment for the service rendered is not provided by the report generator because it will only focus in generating reports after the registration of the citizen’s information is being done by the authorized personnel.  This part describes the relationship between the dependent variables, independent variables and intervening variables of existing system and proposed report generator. 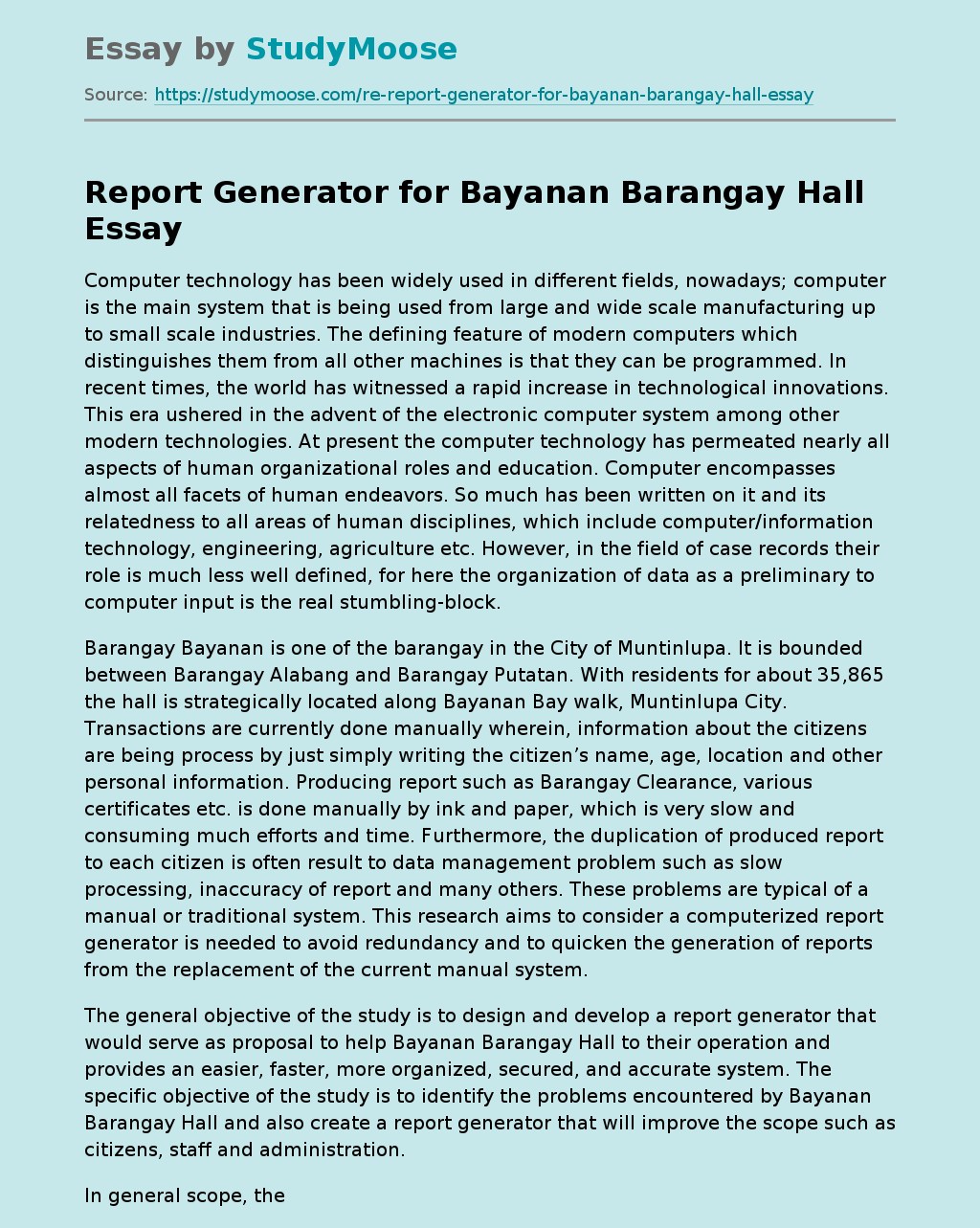