MINUTES OF THE BARANGAY ASSEMBLY

First presenter was Kagawad Noe M. Romero Sr., Chairman Committee on Peace and Order; he reported that from May to October 2012 the number of cases filed in the Barangay is 37 included the VAW-C cases.

Don't use plagiarized sources. Get your custom essay on
“ Barangay Assenbly Minutes ”
Get custom paper
NEW! smart matching with writer

In drug related cases, about 15 persons apprehended from April to October 2012 based on the drug inventory receipt of property seized issued by the PDEA Operatives and CAIDSOTG.

He said that this program was designed to counter and eliminate one of the problems of the Barangay which is drugs. On the other hand, on the infrastructure and developmental projects, he enumerated some of the projects implemented such as the construction of footwalk at Purok Balinday and Purok Lampirong, declogging of drainage system at Purok Sigay, construction of artesian well at Purok Tahong, distribution of jetmatic pump (replacement) at 5 Puroks, and procurement of various electrical supplies distributed to 5 Puroks.

SK Chairman Lovely May O. Rile, Chairman Committee on Youth and Sports Development, reported the various activities implemented by the SK Council from April to October 2012. Some of them are the SK Socio-Cultural Presentation “Search for Miss SK 2012” which held last March 2012, SK Summer League 2012 last May 2012, Supported the Barangay Scholars for the payment of their tuition fees and ALS Program of the Barangay. SK Council also sponsors the procurement of t-shirt for the Senior Citizens of the Barangay during the celebration of the Barangay Day last March 2012. She also added that for the December activity, the SK Council planned to have an Inter-Purok Belen Making Contest and a Socio-Cultural Presentation “Search for Mr. SK 2012.

Lastly Punong Barangay Emelda J. Banguanga reported some of the programs, projects and activities that had been delivered by the Barangay such as the effective implementation of Barangay Budget for 2012 which already reported by Kgd. Barilla, passage of Barangay Resolution approving the Annual Investment Plan of Barangay 2 for the year 2013, full support extended to the education program, livelihood program, health and social services program, infrastructure program and diversion program through socio-cultural activities, facilitated the 125 additional household targeted beneficiaries, procurement of various supplies and materials for Barangay. 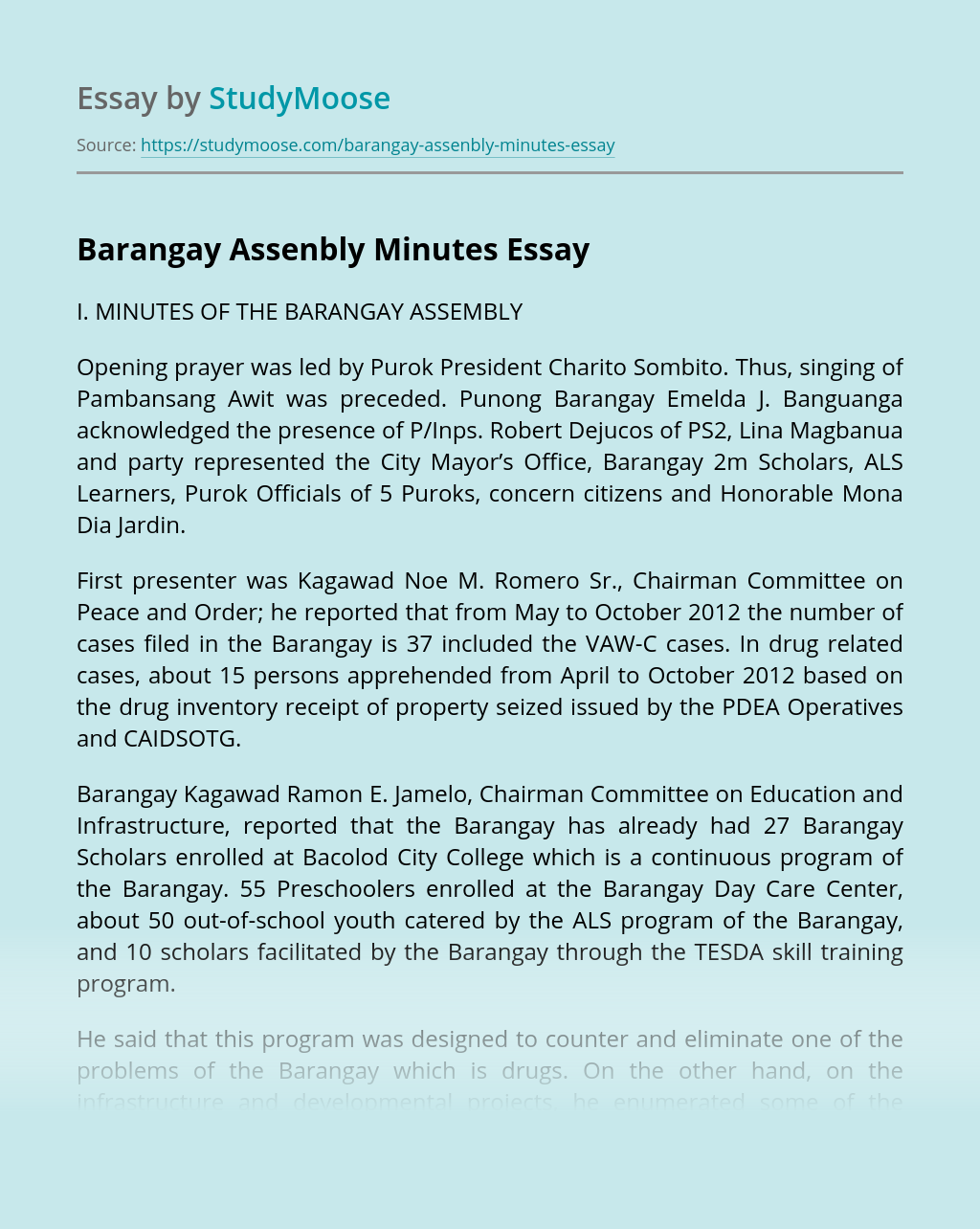