During The early 1930’s, the Great Depression varied substantially across countries. Back then, the U.S. was more severely devastated from World War II. Millions of Americans were jobless and at the same time there was Financial Crisis. Based on discussions, the U.S. used the Philippines as a source of Raw Materials for their Manufacture. By then the U.S. slowly relinquished and improved. During that era, the U.S. established the Tydings Mcduffie Law, as the access of the Philippines to have its dependence.

According to the Law, the Philippines are not to go to war without the permission of the U.S., unless it involves in protecting itself. Now, in case of economic context, the U.S. had already had Asian immigrants, which part of them are also Filipinos. The reason why the those Immigrant Filipinos settled there, unfortunately, is for low wages. They wanted to earn as much as they can too in a short period of time.

And since the Americans were financially devasted during that era, they blamed Filipinos for being part of their Financial Crisis because they were working to become rich once they get back to their homeland, and for the fact, since the ratio of women to men were small, that Filipino men also marry white women because of monetary context.

After then, the Tydings Mcduffie Law was established the U.S. to limit the immigrants of the country. When the Law was also implemented on 1934 in the Philippines, the country had a bound in the U.

S. where they were not allowed to go to the U.S. In the Law, the Philippines were to be under self-governance after 10 years from the Establishment and at the same time the Americans would maintain Military Forces during the period given. During the period, foreign affairs in the Philippines were dealt by the Americans while Internal Affairs were to be only dealt by Filipinos.

2The Philippines was under various colonizers, but was mostly dominated by the U.S., mentally. Neocolonialism, by Merriam Webster’s definition, is the, “economic and political policies by which a great power indirectly maintains or extends its influence over other areas or people.” We were greatly influenced by the Americans during the time before we had our independence from them. Until now, most Filipinos are brain-washed, or more importantly, still have the colonial-mentality. Can I say that neocolonialism is a disruption to an independent nation? How can it disrupt such way? The Philippines was already a rich nation during the old era.

Due to various colonizations, the country became poorer and poorer. I’m not saying that I’m anti-democracy or something, but then what did the country learn in the end? Dependency. Yes, it is grateful to have foreign influence and have been introduced to better technology and economy, but can it improve us mentally? Neocolonialism is beneficial to our country because we need economic and financial help. We are open to foreign trades, as established in the Bell Trade Act. It helped improve our economy because we had labor, but were does the money go? Not wholly to our country.

We were enslaved for foreign industries, not local. It’s better to be labored in the local, in my opinion, because the local is more benefited. Until now, we support foreign products more than our local ones, leading our country poorer and poorer. Not only does neocolonialism affect us financially, but also mentally. We let our best or educated Filipinos work abroad. I’m actually glad that neocolonialism isn’t a trend in the modern era. If we let that kind of become a part of influencing us again, then how can we improve ourselves independently? What neocolonialism affected our country is also our discipline. We decreased our discipline and self-respect. 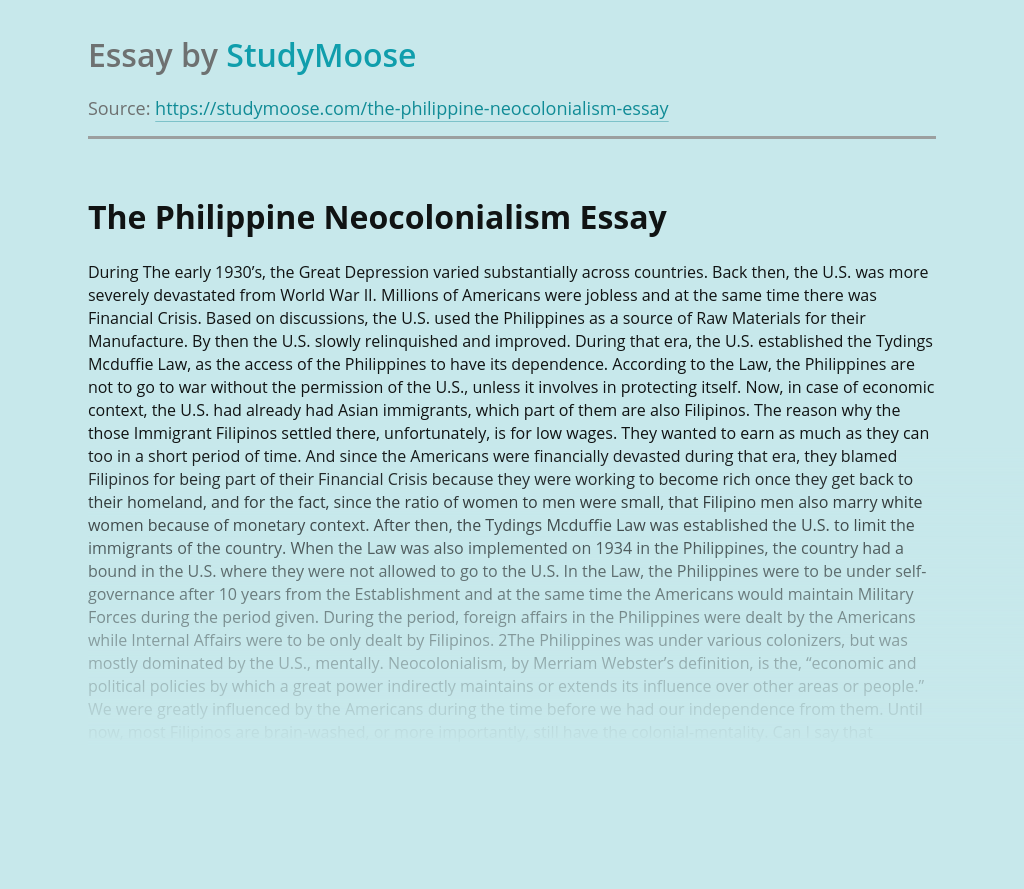 Don’t waste time
Get a verified expert to help you with The Philippine Neocolonialism
Hire verified expert
$35.80 for a 2-page paper
Stay Safe, Stay Original