The Path to Enlightenment: Plato's Allegory of the Cave

Plato presents concepts that still hold to this day. In the allegory of the cave, three main ideas are proposed: We live in a form of a matrix which would represent the cave structure since birth, what happens when one who was in this matrix gets enlightened and ultimately that we tend to reject new knowledge that challenges us in our comfort zones.

Living in the matrix since birth.
Don't use plagiarized sources. Get your custom essay on
“ The Path to Enlightenment: Plato’s Allegory of the Cave ”
Get custom paper
NEW! smart matching with writer

Living in a cave in relevance to education would be a classroom environment, where the students are not informed of their modules content. They live in a world where they see the laws of our universe working but they do not understand why it works that. Hence they would start to determine what makes things work the way they do. They start naming them and identifying them; like saying the world is flat because it makes visual sense to say we walk on a horizontal landscape so the earth must be flat.

If they did not attend a school they would not know better, since they only get informed of the real truth after being taught by people who have gone through university or people who have gone to actually do the experiments that prove what is real vs the illusion we might live in. Socrates said that ” Education is the kindling of a flame, not the filling of a vessel” ( Socrates). This speaks so much to the fact that learners just take the information given to them as absolute truth without question because they grew up not being encouraged to ask a lot of questions from home and their communities.

Escaping the cave in our modern times is like graduating from the classroom environment. It would be like learning about life after high school. Imagine you are a student who just got told that not all your maths books have the right answer in the back and that even though the person who wrote the book has a PhD in mathematics and they made a calculation error that wasn’t caught when the book went for publication. This would seem a hard concept to grasp because we tend to believe that people who have PhDs are specialists in their fields and they don’t make a lot of mistakes. Whence, why we believe what they teach us.

Learning that you need to verify the answers in the textbook or learning that you need to do maths for entrance at university while you hate maths is the enlightenment process. In reference to the Allegory of the cave by Plato, this would be the moment when the prisoner got released and he had to see the fire behind him.The education process is a hard one because finding out that you have to leave your home and finding out that you no need to learn new things requires assistance from others. This is where you have the teacher playing the role of enlightening other prisoners in the cave and as an enlightened individual, you yourself would have had to be assisted by other people.

In the allegory, Plato describes the painful process that the Prisoner had to go through whereby his eyes were hurting and his body was still adjusting to not being restrained anymore this would be the process of being educated. The uphill battle to being educated involves you disputing the teacher’s instruction. For example, most learners ask ” why do I have to do this homework? why do I have to submit this project on time?”. Students would need help from their parents and need help from their teachers and their community in order for them to be fully enlightened or to be educated. In other words students need to be forced to be educated when they are reluctant to study, For example, you would threaten to call their parents when they didn’t do their home.

Once we are educated this gives us a particular new set of skills where we are now able to reflect back from when we were students from when we were still in the cave and believing that shadows were the truth. we now know what is real and we can now look at ourselves in terms of a timeline and see where we come from in the cave to the outside the cave and now we feel sorry for those other people who are still in the classroom and must learn.

Enlightening your students in the cave

Enlightening of the prisoners in the cave requires courage. Luke Daniels writes “Schools in South Africa are becoming more violent”(Luke Daniels). As you would note the current crisis in South africa about the teaching profession are scary if not threatening. According to Plato’s dialogue he admits that the is a risk for the enlightened going back in the cave because the prisoners are likely to reject anything that is not the norm to their community. But it is our responsibility as teacher to take that action of going back to our communities and educating them.

In closing, Plato’s allegory of the cave still applies to modern times. We still need to find a better way to educate our young ones and to create more secure schools for our communities. The Allegory of the cave is a none ending process in a way because we are always searching for ways to enlighten ourselves.

The Path to Enlightenment: Plato's Allegory of the Cave. (2019, Dec 12). Retrieved from https://studymoose.com/the-path-to-enlightenment-platos-allegory-of-the-cave-essay 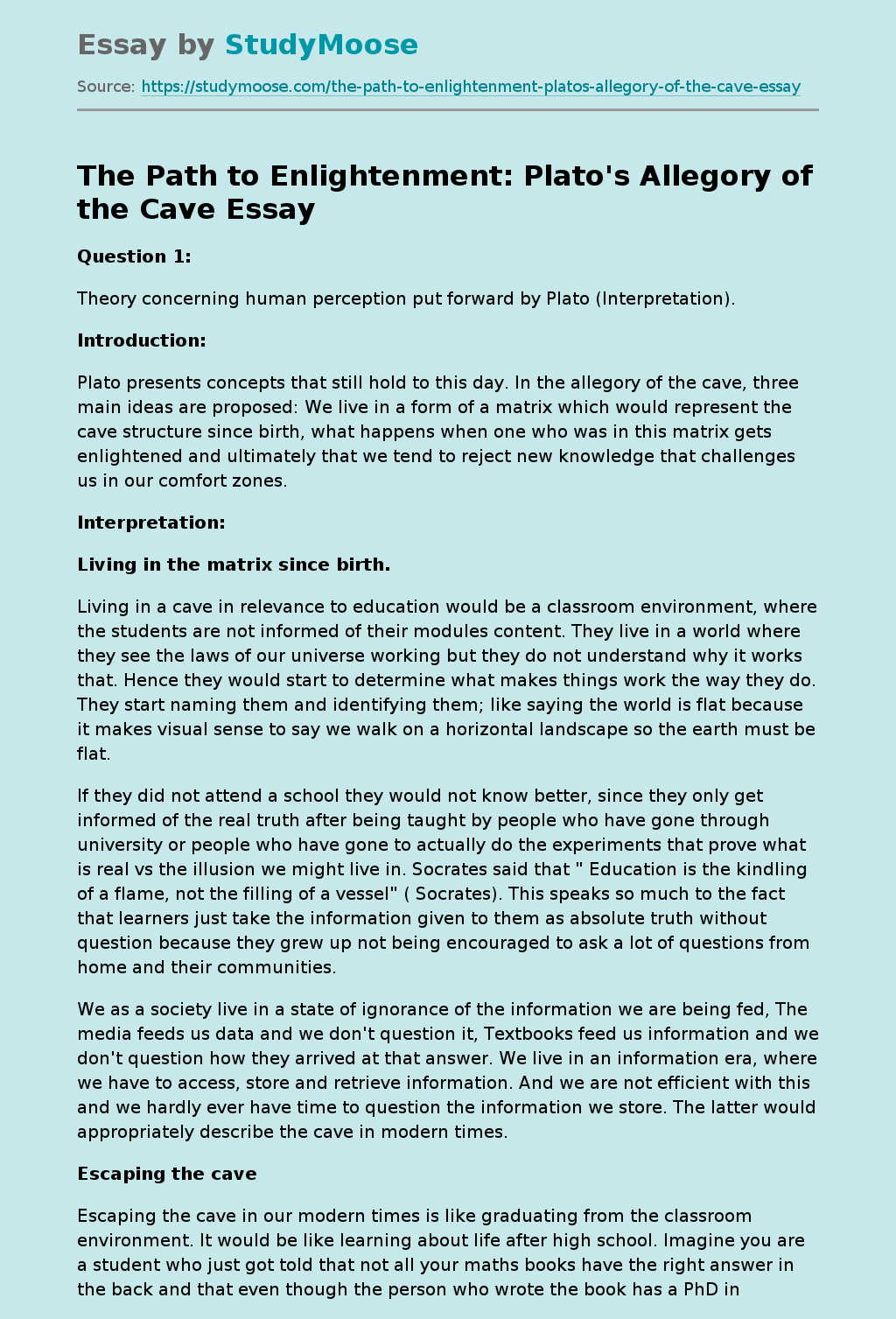