The Other Wes Moore book analysis

Don't use plagiarized sources. Get your custom essay on
“ The Other Wes Moore book analysis ”
Get custom paper
NEW! smart matching with writer

Both of the Wes Moore’s had varying motivations for their incidents throughout the second book that prove that the author runs by a more varied motivation whereas the other Wes runs on a more selfish aspect of intrinsic motivation. In the Memoir, The other Wes Moore, the author gets to the point where he’s slacking off in school and something motivates him to hurt his own little sister “…As she did, my right knuckles skipped off her shoulder and into her bottom lip, which immediately stained red.

Proficient in: The Other Wes Moore

In more shock than pain, Shani saw this as an opportunity …. She smiled slyly as the blood covered her bottom row of teeth…(Moore 88). In this portion of the book this was Wes’ mom’s last straw that got him sent to boot camp, but what motivated him to do so? It mentions in the text that he was punching his sister lightly because he was bored and that is a very intrinsic thing to do.

It was the “carrot and stick tactic” in the sense that he was doing something repetitively for the sake of intrinsic satisfaction of getting himself out of being bored, but in the end he got the stick, which in this case was having done to him what he thought was all bark an no bite (Pink 63-64). He did not expect to get sent to military school. When he thought that he was going to get an intrinsic reward of eliminating his boredom he ended up getting the punishment, in this case the stick. The Other Wes Moore had a similar situation happen to him, at this point in the story readers have no hope that Wes’ life will pick up. Wes, after getting Alicia pregnant starts being very sexually promiscuous, he ends up having a one night stand with this girl of an unknown name. Walking out of his house Wes realized that there was someone out there waiting for his new girl “A tall muscular, older teenager had stood from the curb when he saw Wes’s door open.

It was not clear how long he had been waiting there, but it was clear he was not happy (Moore 103). At this point Wes has gotten himself into a deep consequence for something he did for intrinsic satisfaction, he went for the carrot and just like the author, got the stick. After getting caught with this new girl, her cousin Ray who was waiting for her outside starts beating on Wes. Wes then reacts with another intrinsic action. “He reached up to the top shelf and pulled out the shoe box that held his 9mm Beretta and a few full clips. Wes opened the box, grabbed the gun and clips, and threw the empty box on the floor….Wes could only see red…. As Ray’s house came into view for all three young men, Ray decided to make a run for it, ducking behind a row of parked cars Wes and his friend traded shots and finally heard Ray scream and fell behind a black Toyota fifty feet from his house”(Moore 105). Here Wes had committed attempted murder, he was then arrested, but what motivated him to do this? Once again, one will come to see that the other Wes Moore runs on the “Carrot and stick tactic” very often (Pink 63-64). He was seeing red in the moment because he thought that what he was doing with Ray’s cousin was alright and in being punished for it, he wanted to defend his intrinsic satisfaction by committing something to try and get rid of the external punishment, and by doing so once again gets the stick by being arrested.

Though one can say that both Wes’ follow a certain kind of motivation, the deeper one gets into the second half of the book one can see their motivations start to slightly change or shift. The author Wes, when first being forced into military school by his mother was very eager to go back home and tried everything he could to make it back home, over the course of a couple of years that idea started to change. “I was now a platoon sergeant, a cadet master sergeant, and the youngest senior noncommissioned officer in the entire corps. Three years ago I’d been one of the insubordinate kids first entering the gates of Valley Forge. In an ironic turn, I was now one of the ones in charge of them” (Moore 115). One can see the dramatic switch in the author’s motivation, he once upon a time had a mixture of intrinsic and extrinsic motivation due to where he used to live and his surroundings, now he’s eager to progress in the military with strictly intrinsic motivation, with the plus of the extrinsic motivation of making his mother happy, but he mostly did it for himself.

The author at this point knows that there are no rewards in the military, no payment for training nothing but pride, and is functioning on nothing but making himself content with his achievements, he’s focusing on the human not the economic aspect (Pink 25). In the other Wes’s case, his motivation did shift a bit after his friend Levy had told him about the Job Corps. He was a bit speculate because he’d heard about it before, going to the Job Corps was purely intrinsic on his part; he wanted to get out of the dealing game. Though, he had high motivation while in the Job Corps it eventually came to an end one day. “Wes was amazed as he watched how little the game had changed: the corner boys still pulling lookout, the muscle still looking as intimidating as ever. Wes watched as, across the street, a young man no older than sixteen pulled out a wad of cash, held together by a rubber band, and began showing it off to a friend. Lines of heads circled the block looking for their next hit. Some players had changed. But the positions were still the same (Moore 144). After coming back to his home town Wes was amazed at how little things have changed, after realizing the money he was making in the Job Corps wasn’t enough, he decided to go back to his old life of dealing. His intrinsic motivation while in the Job Corps did not last long. At this point his motivation went to being completely extrinsic; he wanted to go back to dealing strictly for the external reward, money, little did he know his reason for motivation was not going to be efficient (Pink 64).

After the events of the book, both of the Wes’ motivation seemed to have plateaued. The author Wes stuck with a high intrinsic motivation with military school; he stuck with it, graduated and even became a paratrooper. In the end, after all his work and achievements, Wes got what was expected from someone with such intrinsic motivation. “As for me, after receiving the Rhodes scholarship, I spent two and a half years completing my master’s in international relations at Oxford. It was revelatory, exciting, intense, and surreal as Mayor Schmoke promised (Moore 177). Wes’ motivation continued even after graduating, he now is working his way towards a heuristic job in which his intrinsic motivation will continue, he followed by ‘if I continue pursuing a future then I will end up doing what I’m most happy doing”(Pink 65-66). The other Wes Moore ultimately came to his downfall after he was found guilty for robbing a jewelry store and killing someone. Getting back into the game made his extrinsic motivation for money to fester more, until he stooped to killing someone. Yet again the other Wes is seen pulling the “carrots and stick tactic” (Pink 63-64).

Throughout the entire memoir both Wes Moores’ have a varying kind of motivation but one can think it’s safe to say that the author stuck with a highly intrinsic motivation especially when he started military school. Meanwhile the other Wes Moore was motivated by money and other extrinsic rewards. Ultimately the author ended up highly successful and grew up with much more pure morals than the other Wes Moore. In the end what drives you may end up shaping the way your future will be.

The Other Wes Moore book analysis. (2016, Mar 07). Retrieved from https://studymoose.com/the-other-wes-moore-book-analysis-essay 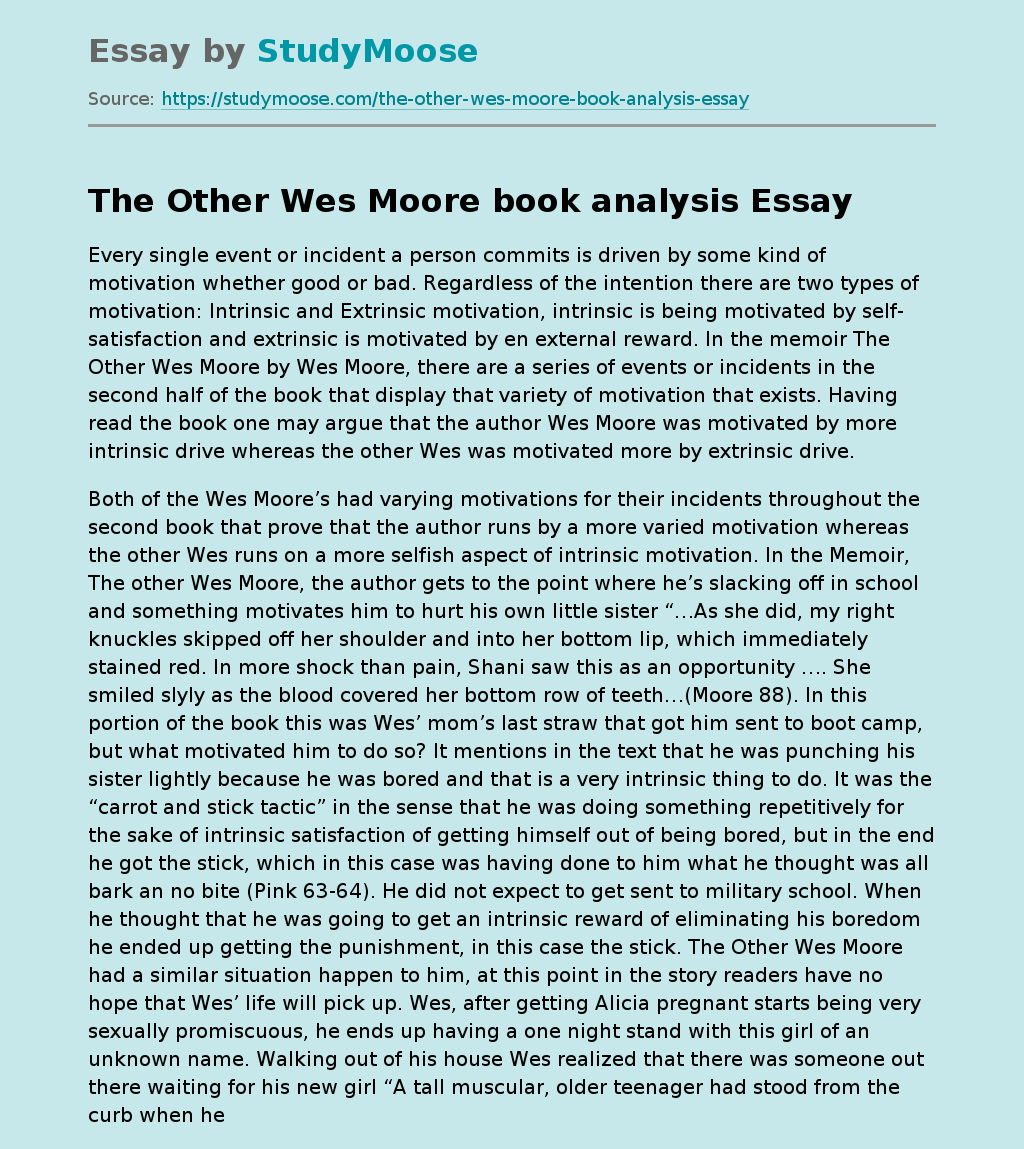