The Renaissance is a time in history that is often discussed and referenced, but rarely defined. Literally meaning “re-birth,” it started in the late 1300s in Italy, particularly in Florence. It encompassed all areas of culture, from art to music to literature to medicine. The Renaissance can also be seen not just as a re-birth of culture but as a revival of culture. After the dark ages, the arts were finally flourishing again. People were interested in science. Many of what are now considered great masterpieces were created during this time.

Don't use plagiarized sources. Get your custom essay on
“ The Italian Renaissance vs the Renaissance in Northern Europe ”
Get custom paper
NEW! smart matching with writer

And, while this cultural revolution started in Italy, it did not take long for this process to begin in other places, such as Northern Europe. It is interesting to look at the difference in the work that came from different regions of Europe.

During the Italian Renaissance, paintings became more realistic. Many artists studied anatomy. The major themes of paintings during this time were religion and mythology. A lot of paintings depicted scenes from the Bible.

A new concept that developed during this time in Italy was linear perspective. This helped the artists to realistically show space. Oil paint was also introduced during this time. An example of an Italian Renaissance painting is “The Last Supper” by Leonardo da Vinci. True to the Renaissance, this painting was of a religious scene and featured realistic figures. Like in many of his paintings, da Vinci carefully rendered the lighting to create the atmosphere. In the front of the painting, where the disciples are seated around Jesus, there is more light.

The rest of the room is dimmer and more shadowy.

Not long after the Renaissance began in Italy, it started to spread. People traded and bought artworks, and artists traveled. In the north, creating realistic figures also became an important focus. While the Catholic church held power in Italy, the Protestant Reformation was beginning to take place in the rest of Europe. As people began to go against the Catholic church, some of the art became more secular. While religious themes were still present, the artwork in the north also featured daily life. Also, since it took longer for the painting styles from Italy to catch on, a lot of the artwork during this time in Northern Europe still feature older styles.

An example of northern renaissance art is the “Arnolfini Marriage Portrait” by Jan Van Eyck in the Netherlands. This painting shows a scene from daily life, a couple getting married. The use of realistic figures is still present. In the room in the painting, the artist shows the minute details of daily life, showing a pet and shoes on the floor. This is in contrast to the da Vinci painting, because in “The Last Supper” the focus is on the figures, and the rest of the painting does little to detract from that. The background is much less detailed than the foreground.

While the art from these two locations is similar in many respects, there are several differences. The most obvious is in the themes. The Italian art stayed primarily with religion and mythology while the northern art explored daily life and portraits. The religious art in Italy made the subjects look more grand also, while the northern art was more realistic. The northern artists were also more focused on detail. But overall, artists all across Europe were drastically changing art.

The Italian Renaissance vs the Renaissance in Northern Europe. (2016, Oct 02). Retrieved from https://studymoose.com/the-italian-renaissance-vs-the-renaissance-in-northern-europe-essay 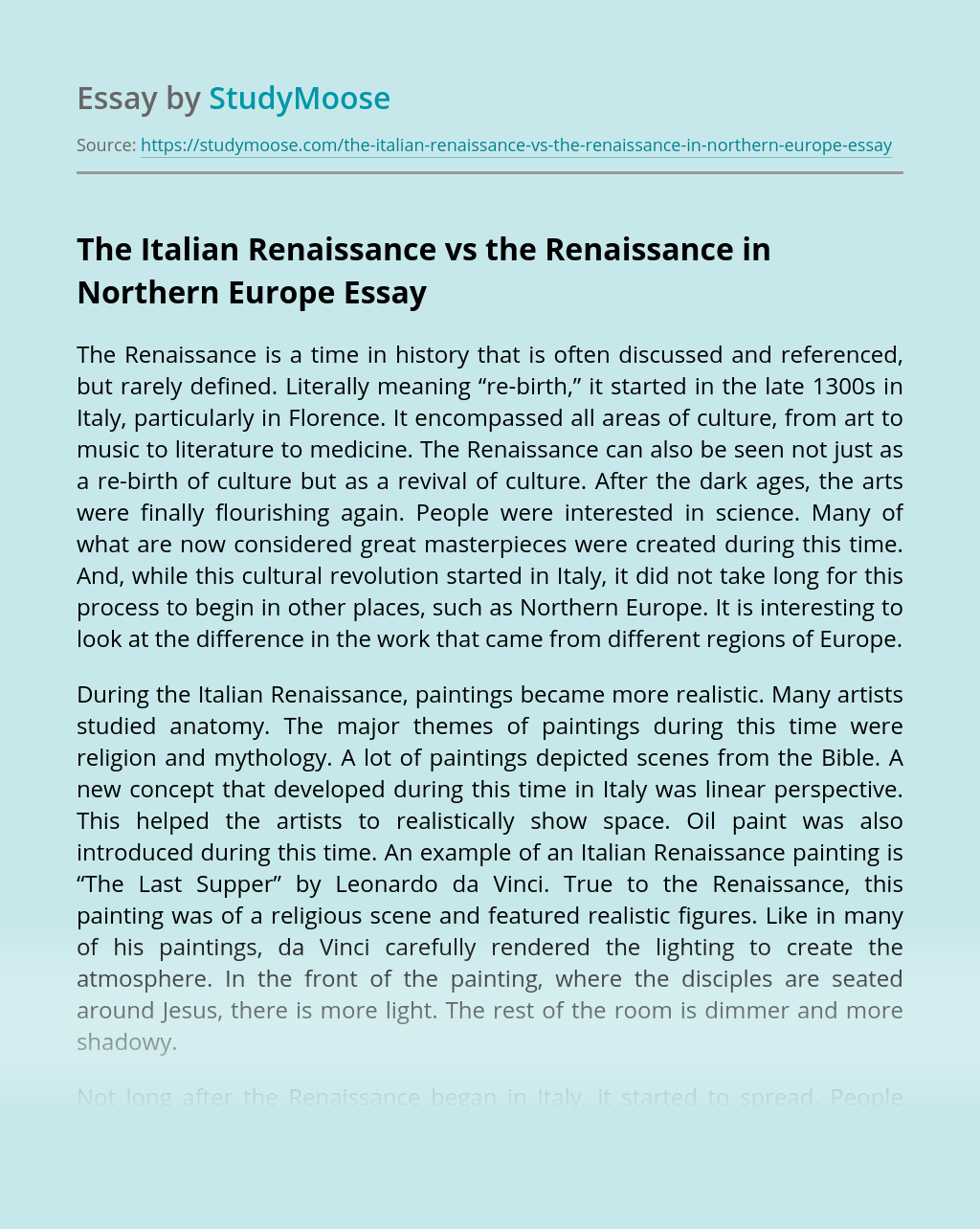