A movie by Pixar, The Incredibles was very well thought of by audiences. In 2005, it won an Academy Award for “Best Animated Feature Film of the Year” beating the movies “Shark Tale” and “Shrek 2”. The film starts off as an interview with three superheroes known as Mr. Incredible, Elastigirl, and Frozone talking about why they have secret identity. They all love their role as superheroes and enjoy helping people.

While the start doesn’t necessarily show conflict it does provide the audience of some tension by having Elastigirl mention that she fights crime because it’s typically a male only thing, and she doesn’t believe that men should be the only ones able to save the world.

Turn in your highest-quality paper
Get a qualified writer to help you with
“ The Incredibles Conflict Theory ”
Get high-quality paper
NEW! AI matching with writer

When asked about settling down she goes on the defensive by asking “Are you kidding? “. In this paper however the main relationship and conflict will be between Robert (Bob) Parr also known as Mr. Incredible and Buddy also known as Incrediboy in the first and original conflict or Syndrome in the later years of the conflicts.

The official synopsis of “The Incredibles” as described by Moviefone. com is “Directed by Brad Bird, The Incredibles revolves around former high-profile superhero Bob Parr (aka Mr. Incredible), who has not-so-successfully settled into suburban life along with his wife and kids under the watchful eye of the Superhero Protection Program. A far cry from the “glory days” during which “supers” were a welcome addition to society, the Parrs’ living situation was brought on after a series of superhero-related lawsuits forced them into hiding.

When not trying to fight small-time crime undercover with fellow former superhero Frozone (Samuel L. Jackson), Parr (voice by Craig T. Nelson) is muddling through the corporate world as a paunchy, emotionally unsatisfied insurance claims adjuster. His family is like any other with some notable exceptions — his daughter has the uncanny ability to become invisible and create impenetrable force fields at will; his son, Dash, can run at incredible speeds; his wife, Helen (Holly Hunter), is known in super ircles as Elastigirl, one of the most respected (and pliable) superwomen of her time. Just when it looks as if things can’t get any worse for Bob, he gets a summons to show up at a remote island to receive instructions for a highly classified assignment, which he promptly accepts. Thrust back into the world of fighting crime, the Incredible family is back in familiar territory — saving the world from Syndrome, a jilted former fan of Mr. Incredible. ” The film is rated PG by the Motion Picture Association of America (MPAA).

The film runs 115 minutes and is filed under the Action, Animation, Comedy and Family genres. One of the first conflicts in the film causes a bigger conflict in later years and later in the plot between the same characters. A conflict is defined as “Con? ict is a fact of human life. It occurs naturally in all kinds of settings. Nations still struggle, families fracture in destructive con? icts, marriages face challenges and often fail, and the workplace is plagued with stress. ” in the textbook “Interpersonal Conflict” by Wilmot.

Meriam-Webster defines conflict in three ways. Firstly a war, fight or battle. Secondly “competitive or opposing action of incompatibles :antagonistic state or action (as of divergent ideas, interests, or persons)” or “mental struggle resulting from incompatible or opposing needs, drives, wishes, or external or internal demands”. Lastly “the opposition of persons or forces that gives rise to the dramatic action in a drama or fiction” The conflict starts with Mr. Incredible getting in his car to find he has a passenger, a young boy, wanting to join him and fight crime.

This conflict is very much related to power and power currencies as Mr. Incredible has the power. The boy claims he is Incrediboy and wants to be his sidekick. After admitting he knows all his moves, crime fighting style, favorite catchphrases, and also is his number one fan, the young boy is ejected from the car and Mr. Incredible flies off down the street telling him he’s just a fan boy. While it is a short conflict, power is a clear perspective that starts the plot of the movie.

“Just as energy is a fundamental concept in physics, power is a fundamental concept in con? ct theory. In interpersonal and all other con? icts, perceptions of power are at the heart of any analysis. Hundreds of de? nitions of power tend to fall into three camps. Power is seen as (1) designated (power given by your position), (2) distributive (either/or power), or (3) integrative (both/and power). Designated power comes from your position, such as being a manager, the mother or father of a family, or the leader of a team. Your power is conferred by the position you hold. ” (Wilmot, p. 103) By this definition Mr.

Incredible got his power in a designated way, as he is looked to as a leader and as a role model to many especially to the younger boy. He essentially gave Mr. Incredible power over him simply by admiring him so greatly and admitting that he was his biggest fan. One of the ways that the younger boy could of resolved the conflict in a better way was to ask Mr. Incredible if he could see some crime fighting action on a slower day instead of jumping in the passenger’s seat during a robbery situation startling Mr. Incredible.

Typically it’s better to ask rather than to just do something first that involves another person. Then again Mr. Incredible could of been a little more politer when addressing his mega fan. Both characters could have changed the ultimate outcome of the film but as the conflict escalades in the plot as shown in the rest of the essay if the conflict had been resolved, there would be no film to watch. After the original incident, Mr. Incredible has given up his super suit several years later and is working at an insurance company.

He then is fired and offered a job by a mysterious blonde who won’t name who she exactly works for, but wants him to relive his super hero days on a volcanic island doing missions, mostly fighting robots. Finally there is a robot that Mr. Incredible is unable to defeat and the younger boy from the original conflict is show to now be older and quite insane trying to gain power over Mr. Incredible by creating something that he is not able to beat. Those hurt feelings from the original conflict have been built up and are now revengeful and trying to save face to show Mr. Incredible that he is not Incrediboy anymore he is advanced, gained significant wealth as shown by the private island, and improved to a new super name, Syndrome.

As the plot goes on Syndrome is defeated in a super hero style, finally noting that holding a grudge for many years did him no good in the end. He finally realizes that he isn’t happy as he may have money but he’s truly alone in the world, and the man who he despised has what money can’t buy, true happiness and a family. Although he does try to steal Mr. Incredible’s youngest son, Jack Jack, to get even and again is defeated whilst finding out Jack Jack’s super power. 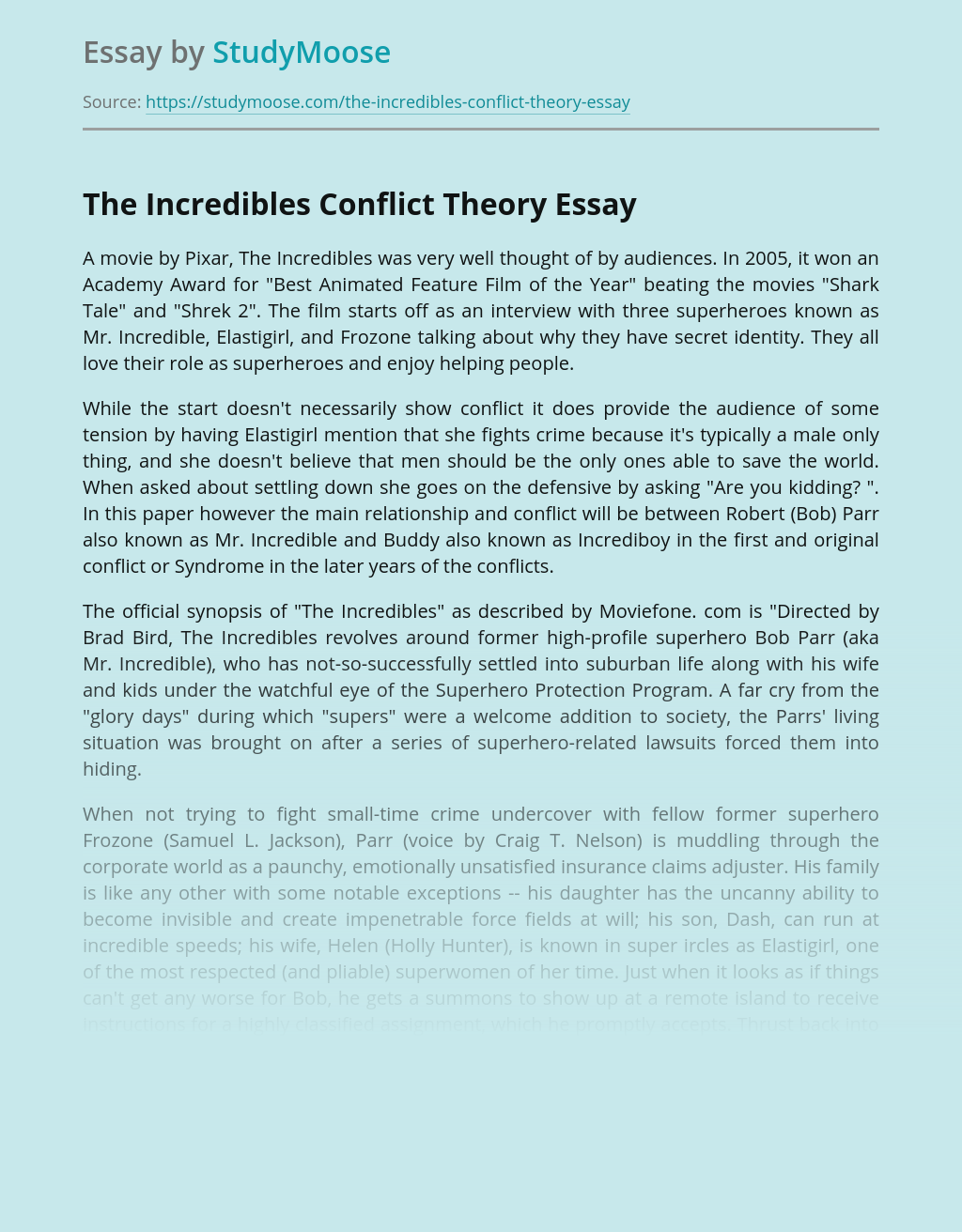 Turn in your highest-quality paper
Get a qualified writer to help you with
“ The Incredibles Conflict Theory ”
Get high-quality paper
Helping students since 2015
Stay Safe, Stay Original