Critical Analysis of the Conflict Theory

There are three major theories: Structural Functionalism, Symbolic Interaction, and Conflict. These theories relate to the main aspects of life in a society: organized group membership, interaction, and conflict. Out of all three of these, conflict seems to be the most straight-forward. Every person has experienced conflict in life. The main focus of this theory is how power structures and power disparities impact people’s lives (The Catholic University of America, 2008). Conflict theory according to Crossman (2013) emphasizes the role of coercion and power in producing social order.

Don't use plagiarized sources. Get your custom essay on
“ Critical Analysis of the Conflict Theory ”
Get custom paper
NEW! smart matching with writer

This is derived from the works of Karl Marx, who saw society as fragmented into groups that compete for social and economic resources.

According to Walsh (2012), Karl Marx (1818 – 1883) is the father of critical criminology; he is also associated with the ideas of socialism and communism. “The core of Marxism is the concept of class struggle: Freeman and slave, patrician and plebian, lord and serf, guildmaster and journeyman, in a word, oppressor and oppressed, stood in constant opposition to one another.

The oppressors in Marx’s time were the owners of the means of production (the bourgeoisie), and the oppressed were the workers (the proletariat). The bourgeoisie strives to keep the cost of labor at a minimum, but the proletariat strives to sell its labor at the highest possible price. These opposing goals are the major source of conflict in a capitalist society. The bourgeoisie enjoys the upper hand because capitalist societies have large armies of unemployed workers eager to secure work at any price, thus driving down the cost of labor.

These economic and social arrangements – the material conditions of people’s lives – determine what they will know, believe, and value, and how they will behave.” To sum this up, Marx referred to these groups as the have’s (bourgeoisie), and the have not’s (proletariat).

Conflict theory is in essence a complex system with imbalance, which results in conflict that can leave to social change. It explains social life through understanding social processes as the result of the constant struggle between groups. In society there are limited resources, such as power, wealth, education, and prestige, as a result people compete for those resources for survival and to improve their position in society. As stated by McQueeney (2011) according to conflict theory, society is: “A struggle for dominance among competing social groups (classes, genders, races, religions, etc.). When conflict theorists look at society, they see the social domination of subordinate groups through the power, authority, and coercion of dominant groups. In the conflict view, the most powerful members of dominant groups create the rules for success and opportunity in society, often denying subordinate groups such success and opportunities; this ensures that the powerful continue to monopolize power, privilege, and authority. You should note that most conflict theorists oppose this sort of coercion and favor a more equal social order. Some support a complete socioeconomic revolution to socialism (Marx), while others are more reformists, or perhaps do not see all social inequalities stemming from the capitalist system (they believe we could solve racial, gender, and class inequality without turning to socialism).

However, many conflict theorists focus on capitalism as the source of social inequalities.” The primary cause of social problems is the exploitation and oppression of subordinate groups by dominants. Conflict theorists generally view oppression and inequality as wrong, whereas structural-functionalist may see it as necessary for the smooth running and integration of society (McQueeney, 2011). As noted by the New World Encyclopedia (2013), conflict theory attempts to refute the functionalist approach, which considers that societies and organizations function so that each individual and group plays a specific role, like organs in the body. There are radical basic assumptions (society is eternally in conflict, which might explain social change), or moderate ones (custom and conflict are always mixed). The essence of conflict theory is best epitomized by the classic “pyramid structure” in which an elite dictates terms to the larger masses. All major social structures, laws, and traditions in the society are designed to support those who have traditionally been in power, or the groups that are perceived to be superior in the society according to this theory (New World Encyclopedia, 2013).

Conflict theory presupposes the following according to Ritzer (2007): conflict or struggle between individuals and groups who have opposing interesting or who are competing for scarce resources is the essence of social life; competition and conflict occur over many types of resources in many settings, but power and economic resources are the principal sources of conflict and competition; conflict and struggle typically result in some individuals and groups dominating and controlling others, and patterns of domination and subordination tend to be self-perpetuating; dominate social groups have a disproportionate influence on the allocation of resources and on the structure of society. Ritzer (2007) mentions that in conflict; class struggle is the most fundamental and underlies all other forms. Political, ethnic, religious, and ideological conflicts not only manifest the predominant form of class conflict and the nature of the dominant class, but also in essence would not exist at all were class conflict to be eradicated. As stated by Mooney, Knox, & Schacht, (2007), the conflict perspective explains various aspects of our social world by looking at which groups have power and benefit from a particular social arrangement.

For example, feminist theory argues that we live in a patriarchal society – a hierarchical system of organization controlled by men. Although there are many varieties of feminist theory, most would hold that feminism “demands that existing economic, political, and social structures be change” (Mooney et al., 2007). The Russian Revolution of 1917 can be seen as an outcome of the conflict theory. This even illustrates the major revolutionary power of the rise of one social group against another. As indicated by the New World Encyclopedia (2013), the conflict theory can be applied on both the macro level (like the United States government or Soviet Russia, historically) or the micro level (a church organization or school club). Conflict theory seeks to catalog the ways in which those in power seek to stay in power. Conflict can arise in different areas: law, religion, education, or media, and can be found in the powerful protecting their monopoly, or the powerless attempting to change the status quo. There are some practice applications according to The Catholic University of America (2008) that the conflict theory could be used: it informs policy and may guide to a macro-level practice; it could be useful in formulating assessments involving oppression and client vulnerability; and could enhance understanding of conflict between persons, ideas, groups, classes, and larger social structures.

Practice interventions could be listening for evidence of oppression within individuals, groups, and communities; paying attention to the role of conflict leading to client vulnerability; organizing to alter power relationships; and recognizing that dominant and subordinate groups compete for resources (The Catholic University of America, 2008). When it comes to conflict the assumption is that if you have interaction, then you automatically have conflict. There is no human society that could exist without possessing conflicts of interest; conflict is normal and necessary for growth and social change. In understanding conflict theory, the New World Encyclopedia (2013) states that competition between social classes plays a key part. The following are four primary assumptions of modern conflict theory: firstly, competition over scarce resources (money, leisure, sexual partners, and so on) is at the heart of all social relationships. Competition rather than consensus is characteristic of human relationships. If everyone could get what they wanted, then there would not be any conflict. Secondly, inequalities in power and reward are built into all social structures. Individuals and groups that benefit from any particular structure strive to see it maintained.

Thirdly, change occurs as a result of conflict between social class’s competing interests rather than through adaptation. It is often abrupt and revolutionary rather than evolutionary. Lastly, even war is a unifier of the societies involved, as well as war may set an end to whole societies. There are many assumptions regarding the conflict theory. In summary, conflict theory is the exploitation of the lower class by the wealthy, the unfair relationship between the worker/renter and the landlord/boss, and the idea that money will always bring about conflict. It is an interesting way to look at the world. Conflict theory may seem straightforward, but it isn’t always so cut and dry. In order to understand society, this Marxist theory must be considered without forgetting about other forms of conflict theory. According to The Catholic University of America, 2008, the conflict theory gives us some human behavior concepts such as: all societies perpetuate some forms of oppression and injustice and structural inequity; power is unequally divided and some groups dominate others; social order is based on manipulation and control by dominate groups; social change is driven by conflict, with periods of change interrupting periods of stability; and life is characterized by conflict not consensus. Conflict is an endemic; the goal is to manage conflict so it does not escalate to damaging levels.

Critical Analysis of the Conflict Theory. (2016, Mar 07). Retrieved from http://studymoose.com/critical-analysis-of-the-conflict-theory-essay 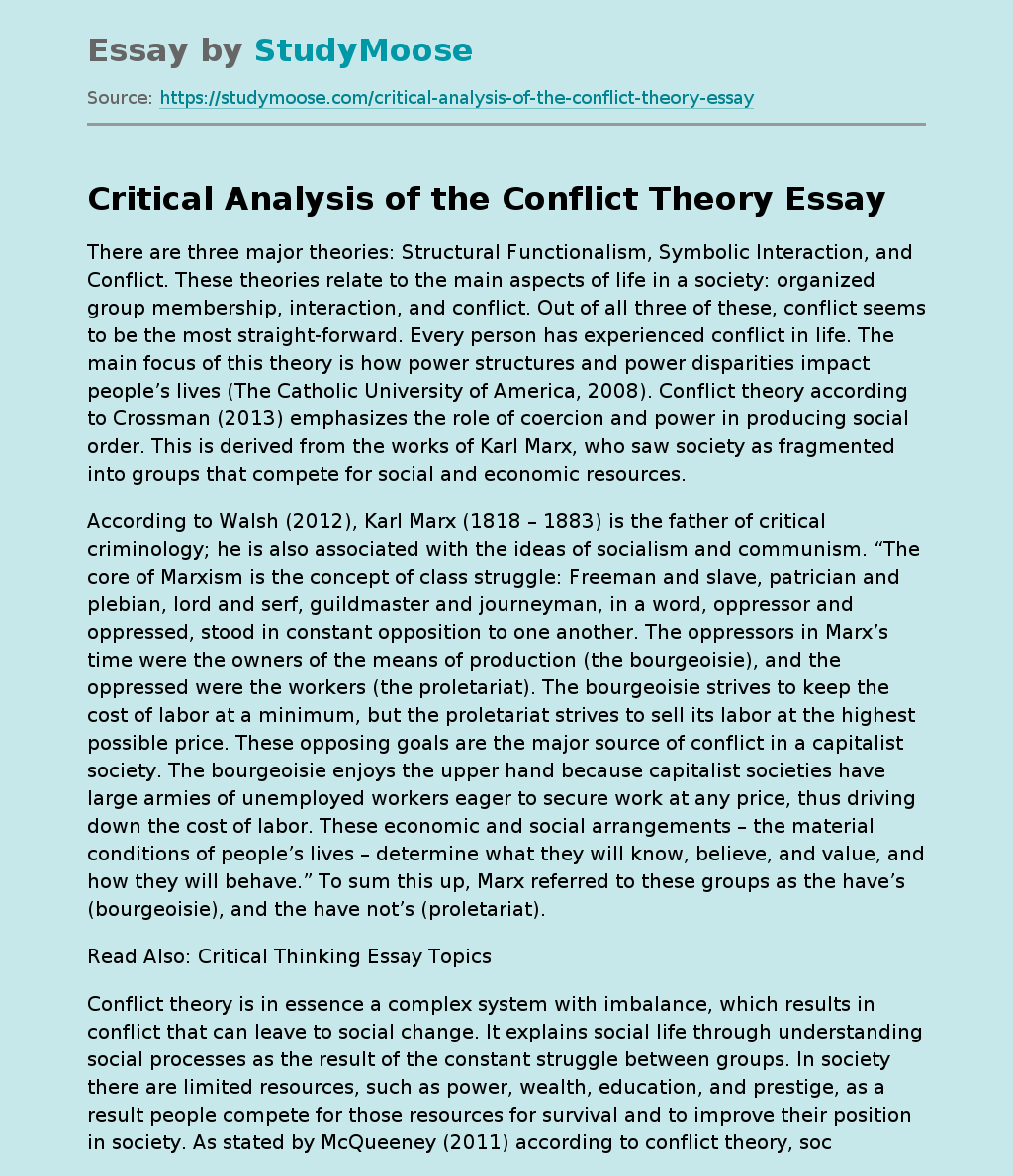