The Impact of Martin Luther King’s Philosophy of non-violence

Martin Luther King Jnr. is perhaps one of the greatest and most remembered black leader to have walked the face of America. He was and still is one of the most revered public figure not only in America, but across the world as well. He is credited greatly to the end of racial segregation in America.

King was born on 15th January 1929 in Atlanta, Georgia and was the son Reverend Martin Luther King. He played a very instrumental in bringing to an end racial segregation on all public transport especially after the infamous Montgomery Bus Boycott of 1955.

Don't use plagiarized sources. Get your custom essay on
“ The Impact of Martin Luther King’s Philosophy of non-violence ”
Get custom paper
NEW! smart matching with writer

King is credited for the speech “I had a Dream” that was delivered to close to a quarter a million people who had assembled at the Lincoln Memorial Park in Washington in 1963 during the March on Washington for jobs and freedom. The “I have a dream” speech is classified as on of the finest speeches in America’s history.

King’s eventful and fruitful carrier in the civil rights was characterized by many instances of resistance to the effects of racial segregation, this would eventually lead to his life being cut short by an assassin’s bullet at Memphis on 4th April 1968. The world lost one of the most valuable renowned persons.

The philosophy of non-violence resistance is one of the legacies that King left behind.

At this time and age the ideology of non- resistance has been exposed to so much resistance and criticism especially from scholars who see it as a term that is often hijacked by “social opportunists and unethical politicians” who threaten to end any form of civil liberties in America. (http://www.mcsm.org/disease.html). Non-violence as practiced by Gandhi or King they argue has no place in the contemporary world. Analogues are even drawn to even prove indeed that non-violence does not necessarily bring about desired change, in fact sometimes it does harm than good. For example Fred Handschumacher illustrates this with the HIV virus that eventually causes great harm to the victim (http://www.mcsm.org/disease.html)

To be able to understand clearly the non-violence resistance ideology, it is important first to understand the history behind it and especially how it is related to Martin Luther King. Non- violence had always been considered by many across the world as on of the many options to bring about change in the social, political and economic environment. Martin Luther King on his part saw it as “the only road to freedom”. Martin Luther King saw 3 ways of responding to any form of injustice, first was to accept it, the second was to resort to brutality and use of force and the third was to practice non- violence resistance. The power behind the third option depended so much on the power of the moral conscious. (http://www.ncs.pvt.k12.va.us/ryerbury/king-12/king-12.htm )

It was while he was still a student at Crozer Theological Seminary in September 1948 that he came to learn about the life and teachings of Mahatma Gandhi the great Indian leader. In Gandhi’s ideology of Satyagraha that espoused the need for resistance without violence, Kings saw the answer to his quest o eliminate the economic and social injustices not only in America, but in the world as well.

After this encounter King laboriously studied this ideology that advocated the virtues of “turning the other cheek” and today has become the “predominant way in which people overthrow tyrannical governments and make their lives better”. (King, 1958) Soon afterwards Kings was to successfully implement the theoretical aspect of the ideology during the Montgomery bus boycott of 1955. Racial segregation by the end of the boycott was done with, without any form of violent resistance or confrontation.

The ideology as developed by Gandhi and practiced by King had six principal points that the resister had to adhere to, they included: –

King was so much indoctrinated in these virtues and this is what made him so successful in utilizing this method of resistance to an extent it has such a level of impact across the globe.

The major impact where the non-violent resistance bore much fruit is in America itself. It was through the civil rights movements during King’s time that would eventually bring to an end racial segregation. Previously the blacks did not have the opportunity to elect directly or even participate in important issues regarding their nation. Blacks today have King’s form of non- violent resistance to thank for what they enjoy today. It is only through such ideals that today Barrack Obama (an African- American) can pursue the dream to become the president of the world’s super power without any form of discrimination.

Democracy in way is a non-violent way of changing the way things a run in any government. America being one of the major proponents of democracy has continued to influence the world over to adopt this nonviolent way of giving the masses the opportunity to express their choice of leadership and exercise their rights.

In America also although overall success is sometimes hard to quantify, nonviolence was the only way or option to for the blacks to retain their jobs, lives or even homes and thus retain their “dignity and still fight for what they believed in” (http://www.ncs.pvt.k12.va.us/ryerbury/king-12/king-12.htm).

The Caucasian majority at that time possessed all the resources and they were the majority. The blacks could have easily been wiped out if they resorted to any form of violence because it would have been a perfect excuse to fight them back. http://content.scholastic.com/browse/article.jsp?id=4794

The situation that faced the blacks at that time can be equated to what is happening in the Israel/ Palestinian conflict today. The Israel Government has an obvious upper hand in this conflict because of its resources and strength. It has continued to engage in acts that clearly border on human abuse, the Palestinians use violence to retaliate, usually with deadly results. The Israelis use this as a very perfect excuse to continue suppressing the Palestinians.

Non-violent resistance as practiced by Martin Luther King contributed greatly towards the liberation of the minority groups the US. America could not have achieved its superpower status if it its leaders chose to ignore the wind of change that was flowing in its direction. Probably US would still be yoked in the chains of racial segregation if ignored the calls for change even though they were non-violent. Nevertheless, probably today America would not be what it is if King resorted to violent means of achieving the desired change. The conflict in the Middle East would likely be the scenario America would be facing today; but thanks to Martin Luther King Jnr.(http://content.scholastic.com/browse/article.jsp?id=4794)

The Impact of Martin Luther King’s Philosophy of non-violence. (2017, Apr 03). Retrieved from https://studymoose.com/the-impact-of-martin-luther-kings-philosophy-of-non-violence-essay 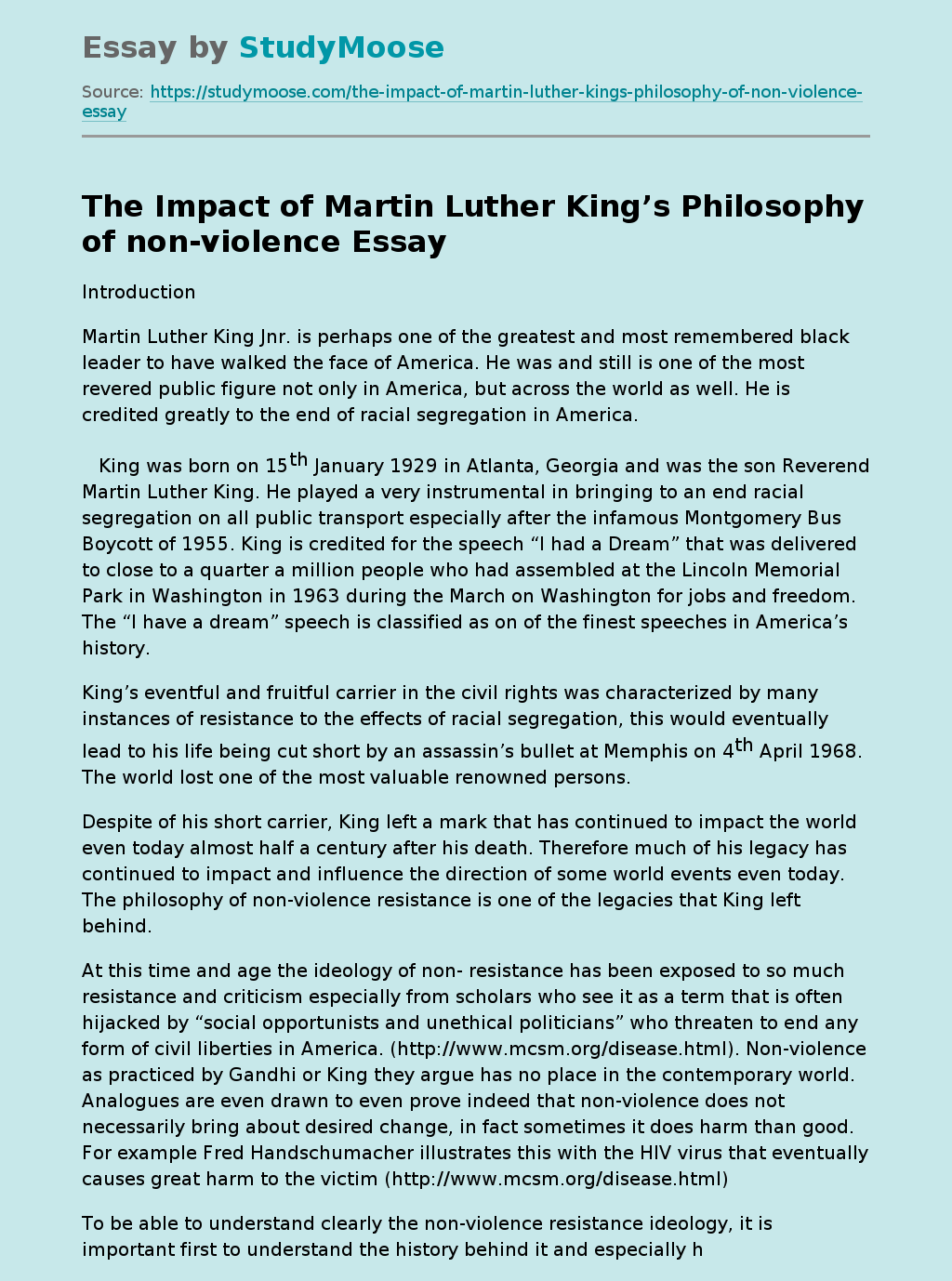