The Growing Crisis of Guns on Campus

On June 1, 2015, Governor Greg Abbott signed S.B. 11 into law. The law makes it legal to carry a concealed handgun on college campuses and dormitories and describes the conditions in which citizens can do so. The law took effect on August 1, 2016 for four-year universities and extended to community colleges a year later. The law does not allow open carry, and carriers are required to have an LTC (license to carry). Professors and lecturers are not allowed to ban handguns in their classrooms, but university policy may ban them in their offices.

Don't use plagiarized sources. Get your custom essay on
“ The Growing Crisis of Guns on Campus ”
Get custom paper
NEW! smart matching with writer

[1] I picked this policy because of its controversial nature and to see if my opinion against the policy stood up to scrutiny.

” Universities are not allowed to establish any “rules, regulations or provisions” that outright prohibit carrying of concealed handguns by license holders, except for in cases (d), (d-1) and (e). Any regulations or provisions must be reported to the “standing committee” every even-numbered year for evaluation, stating the reasoning for not allowing concealed carry.[2]

This legislation, and others like it, are intended to prevent or stop public shootings: the old, “good guys with guns stop bad guys with guns” reasoning.[3] While the idea of “throwing more guns at the gun violence problem” seems preposterous, proponents believe those intending to carry out a mass shooting may be intimidated by the prospect of not knowing who is carrying[4] and that “gun-free” zones don’t work.[5] Critics argue that background checks are not stringent enough to weed out the “bad apples,”[6] and ultimately, more guns equate to more homicide and violence.[7]

We are now nearing 3 years into the policy being put into effect, it is difficult to assess whether the policy has had any beneficial or deleterious effects. Active shooter events on college campuses are a rare event, and gun crime does not appear to have decreased in the areas surrounding campuses.[8] There have been reports of accidental discharge of firearms by LTC carriers in dormitories at Tarleton State University[9] and Texas A&M.[10] No one was injured.

We can look to other states that have legalized campus carry for more insight. The John-Hopkins Center for Gun Policy and Research concluded that most research is at odds with the claims that allowing civilians to bring guns onto campuses makes them safer. They point out that in states with the laxest standards for gun ownership, 60% of incarcerated offenders of gun crimes were legal gun owners. They also found that “1) right-to-carry laws do not decrease mass shootings or the average number of people shot in those incidents; 2) the overwhelming majority of fatal mass shootings occur in places where guns are allowed; and 3) when rampage shootings do occur, very rarely are they stopped by gun-wielding civilians.” They also point to the trend that mass shootings are increasing in frequency in the same time frame that restrictions are being lifted on public carry. They further point out that public carry on campuses is especially problematic as the student body makes up most of the population. College-age people tend to take more risks, abuse more alcohol, attempt suicide more often and are more likely to engage in violent behavior.

This law should be repealed. The facts simply don’t corroborate its supposed necessity. Even the demographic data shows that an estimated 1% of students attending UT possess LTCs, and an estimated 500 students over the age of 21 live on campus dormitories at that university.[1] I’m sure they don’t all have LTCs.

In my opinion, the law is an overwhelming failure, mostly because it’s pointless, at best, and dangerous, at worst. Universities have police forces for a reason. It’s likely that, should an issue arise, more students and professors with guns will just cause difficulties for, already on-edge, police officers. This, on top of the previously mentioned issues, shows the risks outweigh the benefits, and because those benefits likely don’t exist, this policy is the antithesis of good policy. The policy must reflect research if we want it to work. “Gut-feelings” or Hollywood fantasy have no place in governing the lives of millions.

The Growing Crisis of Guns on Campus. (2020, Nov 18). Retrieved from https://studymoose.com/the-growing-crisis-of-guns-on-campus-essay 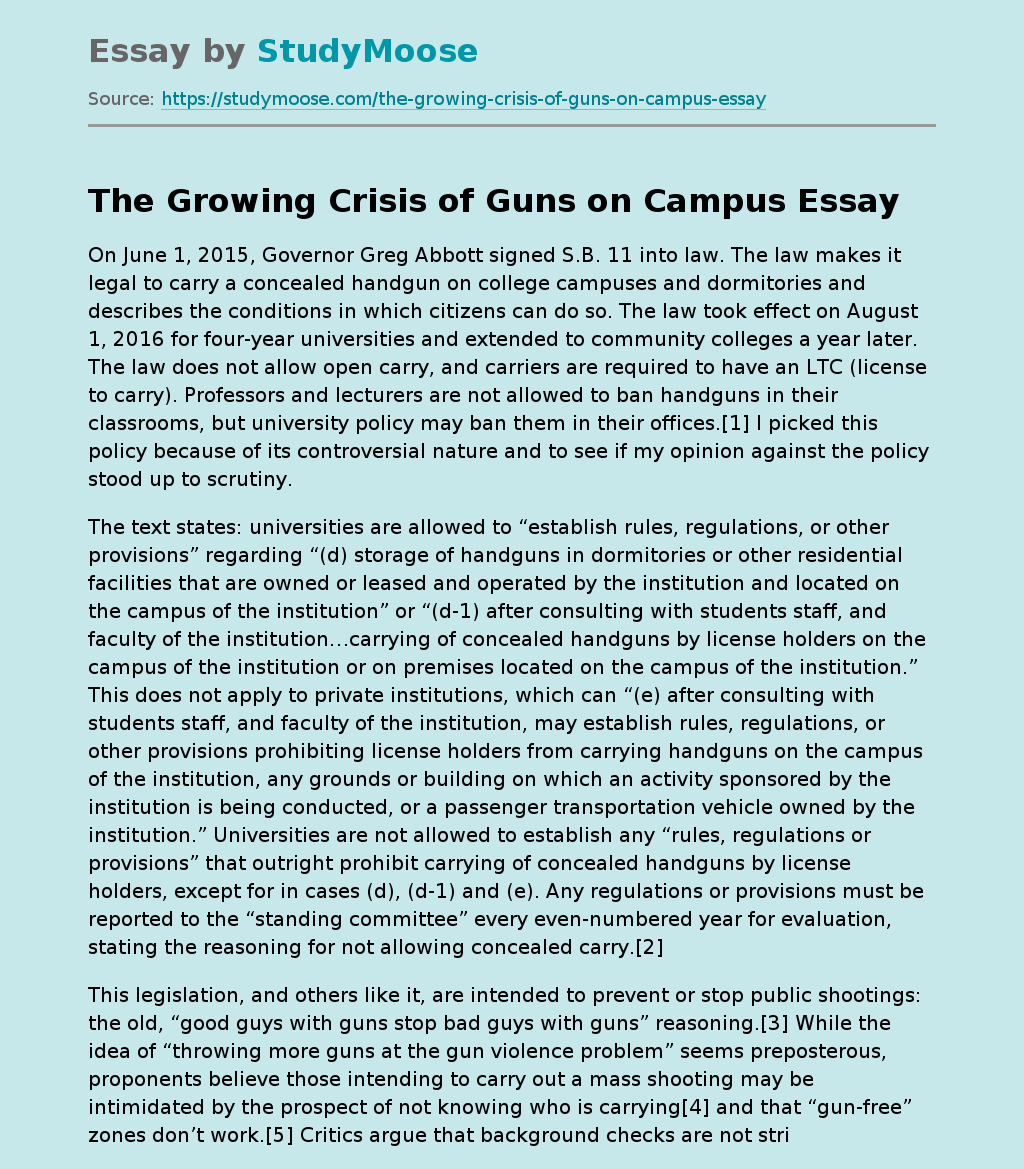