Campus security is an ever-growing concern throughout the United States. Parents want their children to be safe while continuing their education away from home and students want to feel and be safe while living on campus. The University of Maryland at College Park has had a constant battle with campus security as incidences have increased on and around campus.

The University of Maryland is located between Washington D.C. and Baltimore, a “hotspot”, concentrated with high levels of criminal activity.

Turn in your highest-quality paper
Get a qualified writer to help you with
“ Campus Security – Research paper ”
Get high-quality paper
NEW! AI matching with writer

These statistics represent only on campus incidents and have varied tremendously over the past three years. Statistics would be much higher if they included areas around campus. Variations over the years can be attributed to increase in police presence, as well as many security precautions implemented over the past years.

Universities have taken many precautions to battle crime on and around campus. “One of the newest techno-trends on American college and university campuses is tipping campus police to illicit activity by filling out online forms posted on the department’s World Wide Web page” (Campus Crimes…). Colleges such as Duke University, the University of Georgia, and MIT have already implemented such programs and have been very successful (Campus Crimes…). Narcotics activity and burglaries have seen significant reductions. Students and criminals participating in illicit activities now have to be fearful of other peers who may “rat” on them.

There are, however, downsides to such tactics. False accusations could become a problem. So far, of the 100 universities already using such technology “90 percent of the information received over the university’s campus police Web site has been ‘significant'” (Campus Crimes…).

However, although many schools offer such programs, they do not allow enough funding to fully equip such safety programs. Many students are unable to get through to the operator, thus end up walking home alone. More shuttles and operators are needed during peek hours, such as weekends and Thursdays. The N.I.T.E. Ride program is an effective means to avoid harmful situations when the program is fully funded. Otherwise, students tend to walk home alone and put themselves in harms way.

The University of Maryland also offers an excellent bus system. Students, instead of walking alone at night, can seek the safety of the bus (Policies, Programs, Services). The University of Maryland’s Circuit and Courtyard Express provide safe and dependable rides to various key locations on campus. Not only are students protected from crime, but also are encouraged to ride the bus instead of driving home under the influence. The bus system has dramatically decreased rapes and robberies. Having an alternative ride home also lowers student’s fear of crime by lowering at risk situations.

Maryland has also placed blue light emergency phones around campus (Safety and Security). “Emergency phones provide a direct line to the police throughout the campus both inside and outside many academic buildings and residence halls. These phones are either yellow or encased within a blue cylindrical column and are marked Emergency. Frequently they have blue lights overhead making their locations easier to find. Individuals may contact campus police directly and without charge by activating the phone. This notifies an emergency dispatcher, via a computer, of the caller’s exact location” (Policies, Programs, Services). These phones are used to deter potential victimizations as well as provide a means for communication in case of an emergency (Safety and Security). The emergency phones may not lower crime rates, but they do lower student’s fear of crime.

The installation of video surveillance is another means to combat crime on campus. Throughout the nation universities have been installing cameras to record and monitor specific areas. The University of Maryland initiated this effort in 1996 by installing dozens of cameras in parking lots, garages, high traffic pedestrian areas, isolated areas, and by ATM machines (Schultz). Although the effects of video surveillance to reduce crime have not been established, fear of crime by students has dropped. Cameras are very effective in aiding police dispatchers about crime scenes but rarely catch crimes in action (Schultz). Some students feel that funds would be better spent on police surveillance (Schultz).

These students believe criminals will just wear masks or commit crimes where there are no cameras (Schultz). Video surveillance can also be used to aid in criminal investigations. By placing cameras at the entrances and exits to campuses and buildings, police can record license plates as well as faces later used for identification. Although video surveillance may be a useful tool for law enforcement, it is still extremely controversial. Many students feel that surveillance is an infringement on privacy. It can be scary that “big brother” knows when and where you are at all times.

Universities around the globe have offered several programs to students in order to educate and prevent students from placing themselves in at-risk situations. The University of Maryland offers many programs to prevent victimization. One huge program sweeping the nation is Rape Aggression Defense (RAD). RAD is the “fastest growing and largest women’s self-defense program in the country. This program has structured, consistent curriculum, of easy-to-teach, easy-to-learn techniques that have realistic and practical application” (Policies, Programs, Services). The University also provides personal security presentations as well as sexual assault awareness programs.

Awareness is possibly the best solution to crime prevention. “In 1990, Congress passed the Campus and Securities Act” (Safety by the Numbers). This act requires that any university receiving federal funding to “disclose campus crime statistics and provide students with information about the schools safety policies” (Safety by the Numbers). By disclosing information, students and parents become aware of any possible crime problem. Students, consequently, can take preventive measures to ensure their safety. Potential students might also elect to go to schools with safer campuses. This places additional pressure on federally funded universities to tighten their campus security.

Universities that acquire a reputation as being unsafe often lose student enrollment. “The 1998 amendments to the Campus Security Act added more categories of crime statistics that schools must disclose. Arson and manslaughter have been added to the list of offenses, which already included murder, sexual assault, robbery, aggravated assault, burglary and motor-vehicle theft” (Safety by the Numbers). Schools, however, are not currently required to disclose crimes that occur near campus. Often, statistics are distorted and under-represent true crime (Safety by the Numbers).

The key to protection in your dorm room and in an off-campus housing is vigilantism. Always be aware of your surroundings and lock your door at night. Most campuses have installed swipe cards at all entrances, hallways, doorways, and elevators to prevent unauthorized users from gaining access to the building. These swipe cards provide much needed security. In order to gain access someone must let you into the building. “Additionally, doors with card readers are also equipped with prop monitors that cause a horn to sound in the event a door is propped open or not securely closed and latched” (Policies, Programs, Services). Having RA’s on duty in lobbies of all buildings deters suspicious and unwanted visitors. These RAs can report any shady activity as well as provide emergency assistance. 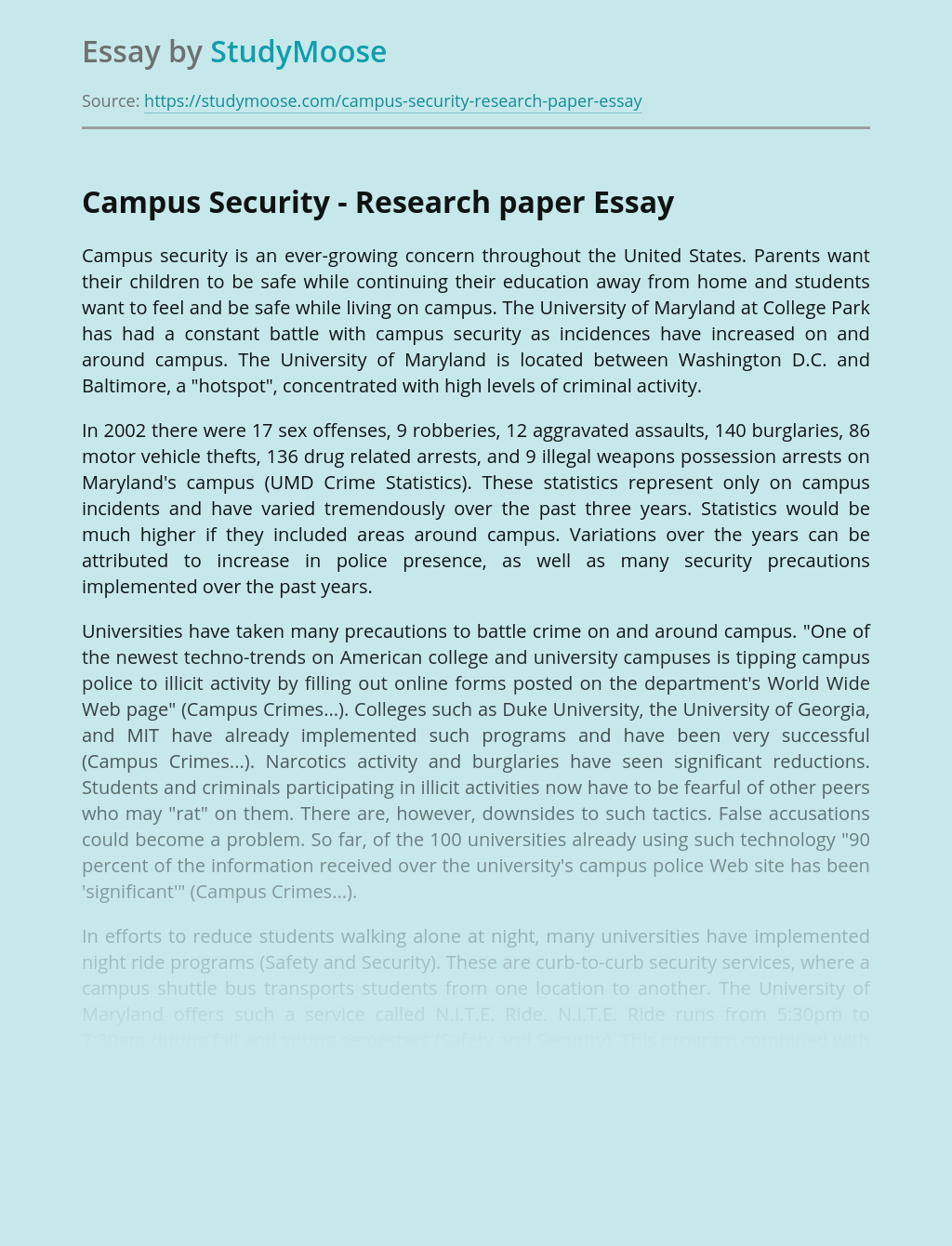 Turn in your highest-quality paper
Get a qualified writer to help you with
“ Campus Security – Research paper ”
Get high-quality paper
Helping students since 2015
Stay Safe, Stay Original