The Great Gatsby is set in 1920’s which is the heart of the gangster era in America. Along with gangsters comes organized crime specifically bootlegging alcohol during prohibition. Prohibition was brought about in 1920 by the Eighteenth Amendment to the Constitution, and it ended in 1933, it was ratified by the Twenty-First Amendment to the Constitution. Bootlegging in the 1920’s is the way many people got rich, including the main character in The Great Gatsby, Jay Gatsby. Prohibition is one of the pivotal ideas in The Great Gatsby, and is always something that seems to come back up in the book.

Don't use plagiarized sources. Get your custom essay on
“ The Great Gatsby: Prohibition ”
Get custom paper
NEW! smart matching with writer

In the novel The Great Gatsby, Jay Gatsby is the main character. At first in the novel nobody knew who Gatsby was all they knew is that he thru all of these lavished parties for his guesses. At these parties all of the guests would gossip about Gatsby saying “I heard he once killed a man” which would indicate some kind of criminal activity if it was true.

Jay Gatsby had an undeniable desire to be very wealthy and have power, so he jumped at any chance he could had to get there. Gatsby finally got what he was looking for when he met Meyer Wolfsheim at Winebrenner’s Poolroom at Forty-third Street, he was asking for a job there p. 171. After they met Wolfsheim knew he could use him and put him to work; that’s how Gatsby got started in bootlegging. He did much work for Wolfshiem right off he did some work for one of his biggest clients in Albany.

But the two were not just business partners they were good friends as well.

The whole entire reason for choosing this life style is so he can get back with Daisy who promised to wait for him to get back from World War I. Once Gatsby got back from the war Daisy had already married somebody his name is Tom Buchanan. Tom is a guy that would call out anybody in almost any place. One day Tom, Daisy, Gatsby, Nick, and Jordan went to the Plaza Hotel and got a suit. Once they started talking Gatsby proclaimed that Daisy had never loved Tom and she married him for the money but daisy did not agree or deny with it.

“Who are you anyhow?” broke out Tom. “You’re one of that bunch that hangs around with Meyer Wolfsheim, that much I happen to know. I’ve made a little investigation into your affairs … I found out what ‘your drugstores’ were.” He turned to us and spoke rapidly. He and this Wolfsheim bought up a lot of side-street drug stores here and in Chicago and sold grain alcohol over the counter. That’s one of his little stunts. I picked him for a bootlegger the first time I saw him and I wasn’t wrong.” From pristine dream Once all of this is said in front of everybody including Daisy, Gatsby’s chance with her gets dimmer and dimmer, once Daisy finally knows how Gatsby obtained his fortune Daisy wants nothing to do with him. Thus he loses his chances with the girl he always wanted because of his dishonest lucrative enterprise. 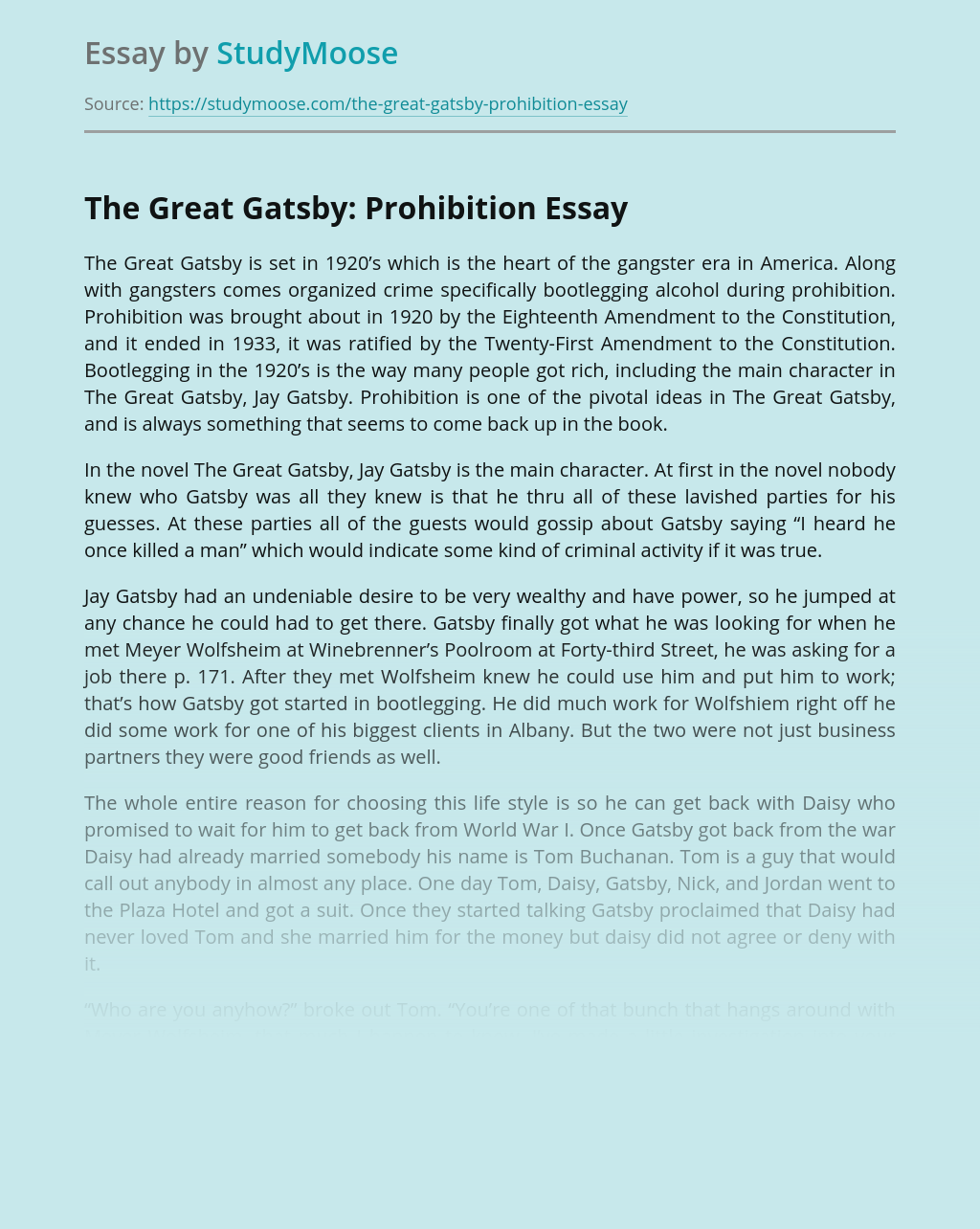