The Great Gatsby: How far can Gatsby be viewed as a tragic hero?

Throughout the novel, it can be seen that Gatsby’s life is indeed tragic. His tragic life is portrayed throughout the novel to have been fated by the post-war American society, despite the heroic attempts he made in order to achieve his ultimate wish of obtaining the desirable and affluent Daisy Buchanan.

Firstly, it can be seen at the beginning of the novel how he is indeed a tragic hero in the point of view of Nick Carraway. Nick claims that “there was something gorgeous about him”, and he had “an extraordinary gift for hope”.

Don't use plagiarized sources. Get your custom essay on
“ The Great Gatsby: How far can Gatsby be viewed as a tragic hero? ”
Get custom paper
NEW! smart matching with writer

This portrays how Nick admires Gatsby’s ability to dream, and how his attempt to pursue these dreams were nothing short of heroic. However, further in the chapter it Nick says “it is what preyed on Gatsby, what foul dust floated in the wake of his dreams…”. This is a suggestion that Gatsby’s dreams were forever doomed by some overpowering “foul dust”, that his hopes were always destined to fail, and that it was nothing short of a stroke of fate which caused his dreams to ultimately fail, therefore deeming his life to be destined to tragedy.

The danger of Gatsby’s involvement with this character and the involvements in the business of bootlegging portrays how Gatsby’s deth may have been inevitable, even though he was only in the business to gain riches in order to impress Daisy. Which he shows when he exclaims in chapter 7 “she only married you because I was poor and she was tired of waiting for me”. The hopelessness of Gatsby’s dreams are foreshadowed by the seperation in classes which, to overcome, he resorts to the violent and dangerous business of bootlegging. This shows how Gatsby’s dreams are ultimately tragic, as is pursual of them involves far too much danger to overcome.

Throughout the novel, the seperation between classes and the inabilities for this divide to be overcome foreshadows the unpreventable failure of his dreams, which he seems to base his life on, and rely too much on. This is shown by the way Nick describes how “the rock of the world was founded securely on a fairy’s wing”, as this displays how Gatsby seems to rely on fantasies to hold “the rock of the world”. However, they are ultimately just fantasies and are inevitably doomed to failure. The divide between the East Egg and the West Egg is shown in chapter 1, when Nick describes:

“I lived at West egg, the- well the least fashionable of the two, though this is the most superficial tag to express the bizarre and not a little sinister contrast between them.”

This clearly depicts the contrast and inability of the eggs to fit harmoniously together, and it is said also in chapter one that “to the wingless, a more interesting phenominon is their dissimilarity in every particular except shape and size”. From this, Gatsby may be viewed metaphorically as one of the winged, who fail to see the dissimilarity between the Eggs due to his hopeless dissillusion of his impossible attempt to pursue Daisy, therefore showing that Gatsby’s dissillusion fooled him from seeing how unachievable his dreams were. Therefore, his failure to see reality is part of the cause of his tragedy.

Overall, the failure of Gatsby’s dream and the corruption in American society seem to be a portrayal by Fitzgerald of the inevitability of the death of Gatsby, his tragedy seems to be foreshadowed throughout the entire novel with his dissillusion causing him to be unaware of the obvious looming failure of his dream, and therefore ultimately the failure of his life. Fitzgerald seems to be portraying how this was Gatsby’s destiny, and although Gatsby can be seen as heroic and admirable for his efforts in his attempt to achieve the American Dream dispite its failure, the corruption in his life caused by the decaying values of Post-war America seem to have caused Gatsby’s life to come to its tragic end.

The Great Gatsby: How far can Gatsby be viewed as a tragic hero?. (2020, Jun 02). Retrieved from https://studymoose.com/great-gatsby-far-can-gatsby-viewed-tragic-hero-new-essay 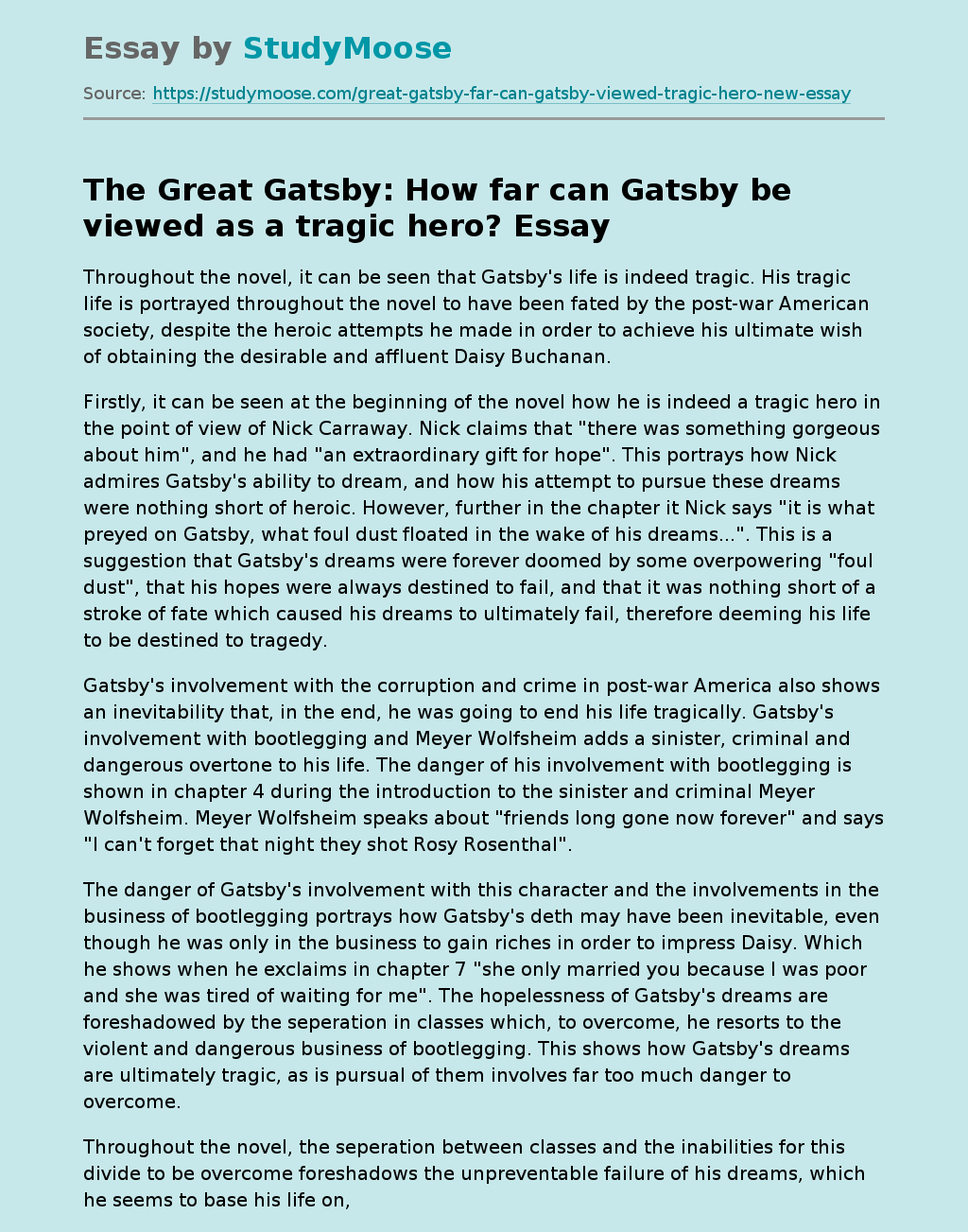