The Great Gatsby is more of a Comic Novel than a Tragic Novel. With reference to appropriately selected parts of the novel, and relevant external contextual information on the nature of the Comic Novel and the Tragic Novel, give your response to the above view.

Don't use plagiarized sources. Get your custom essay on
“ The Great Gatsby is more of a Comic Novel than a Tragic Novel ”
Get custom paper
NEW! smart matching with writer

” However, the comedic genre is multifaceted and there are several different varieties. In examining this view, a good place to start is how the novel has elements of a romantic comedy.

We could interpret the romance between Daisy and Gatsby as the quintessential romantic comedy. This usually involves a girl-meets-boy plot and a love affair involving beautiful, idealised heroine. The course of this affair may not run smooth, but eventually overcomes difficulties to end in happy reunion.

There is a sense of relatable humour when Gatsby first meets Daisy after their five-year separation, where the reader cannot help but be amused by Gatsby’s awkward and boyish actions: “Gatsby, pale as death, with his hands plunged like weights in his coat pockets, was standing in a puddle of water.” Scenes such as this fit much better with a Comic Novel than a Tragic Novel.

The romantic comedy was a popular genre during the 1920s, and Fitzgerald was all too aware of this and tried to incorporate elements of romantic comedy films into The Great Gatsby.

A contemporary of Fitzgerald was Cecil B. DeMille. Always noted as a showman, Cecil B. DeMille’s name was forever associated with extravagant production values – sophisticated romantic comedies such as Old Wives For New (1918) and the racy romantic comedy Don’t Change Your Husband (1919). These films based comedy around dysfunctional marriages and affairs, which is exactly what The Great Gatsby explores in a way that is much more comic than tragic.

Furthermore, it could be argued that The Great Gatsby is a satirical comedy. This facet of the comedic genre ridicules the disorders of society and mocks the follies and vices of individuals, which is clearly evident throughout The Great Gatsby. Gatsby uses the iconic image of, “the eyes of Doctor T. J. Eckleburg,” to mock the materialism of the 1920s. Towards the culmination of the novel George mistakes the advertisement for the eyes of God, which suggests that Fitzgerald was accusing his society of viewing wealth and materialism like a new religion.

In satirical style Fitzgerald presents the reader with a cast of characters that represent everything he hated about his culture, and this sentiment is expressed with the final description of Tom and Daisy as, “careless people,” who, “…smashed up things and creatures and then retreated back into their money.” To quote Laura Turner, “In the novel, Fitzgerald uses satire to emphasize the superficial qualities of his characters.” In light of this, it perplexes me that anyone could claim that The Great Gatsby is not more of a Comic Novel than a Tragic Novel.

Further support for this proposition can be found when we consider that although the novel remains more comic than tragic, it still combines elements of both genres into what is referred to as black comedy. A black comedy is a comic work that employs black humour, which, in its most basic definition, is humour that makes light of otherwise serious subject matter. Fitzgerald writes about events and characters that are inherently tragic, yet does it in such a way that it comes across as humorous. The characters casually joke about drinking, cheating and affairs. Whenever Tom receives a call from his mistress at the dinner table, Jordan makes a sarcastic joke instead of being outraged: “Tom has got women in New York; she might have the decency not to telephone at dinner time.”

Black humour is closely related to the even darker form of humour called gallows humour, which is also utilised by Fitzgerald. This is a form of humour that jokes about death and mortality, which is demonstrated when a partygoer flippantly remarks that Gatsby, “killed a man once.” This is a good example of how Fitzgerald uses black humour to make the novel both comedic and tragic, although more emphasis is placed on the former.

Those that oppose my view claim that The Great Gatsby is more of a Tragic Novel than a Comic Novel. There may be some merit to this opinion, especially when we consider how dark the plot becomes at the culmination of the novel. A Tragic Novel can be defined as one which, “treats in a serious and dignified style the sorrowful or terrible events encountered or caused by a heroic individual.” The first half may be comic, but the denouement is undeniably tragic and lacks the light-heartedness that comedy requires. This is evidenced when Nick writes about Gatsby’s death: “It was after we started with Gatsby toward the house that the gardener saw Wilson’s body a little way off in the grass, and the holocaust was complete.” The use of a word as strong as holocaust suggests that the novel was meant to be taken as a tragedy, not a comedy.

Another key element found in tragedy is catharsis, when the author deliberately evokes feelings of pity to leave the reader ultimately not feeling depressed, but relieved, purged and reconciled to the nature of human condition. This is reflected in the iconic quote, “Gatsby turned out all right in the end.” With Gatsby’s death the reader should feel something like catharsis; that fear that our greatest desires may not ever be captured, and that tragedy inexorably drives towards its own realisation and we are helpless to stop it. This response is more akin to a Tragic Novel than a Comic Novel.

The claim that he novel is more comic than tragic could be contested when we consider that Gatsby is the quintessential caricature of the tragic hero. In tragedy, the hero’s downfall is due to combination of external circumstances and internal flaws. Gatsby’s tragic flaw, his hamartia, is his incessant desire to attain a dream that is unreachable. He has certain hubristic qualities that tragic heroes often have due to the pride he has in his wealth, to the point that he rejects his own family: “His parents were shiftless and unsuccessful farm people – his imagination had never really accepted them as his parents at all.” This is distinctly different from a comic hero, who would be more light hearted.

Furthermore, another way in which Gatsby displays the hallmarks of a tragic hero is through his experience of anagnorisis, the moment he realises that he is wrong and the dream crumbles around him. For Gatsby, the moment of anagnorisis is when Daisy reveals that she did, in fact, love Tom: “I did love him once — but I loved you too.” In his Poetics, Aristotle defined anagnorisis as “a change from ignorance to knowledge, producing love or hate between the persons destined by the poet for good or bad fortune.” This is possibly what Gatsby experiences, confirming that The Great Gatsby is more of a tragic novel than a comic novel. However, we must bear in mind that he still expects a phone call from Daisy right until the end – this could suggest that his anagnorisis was only partial and he was still able to cling onto the remains of his dream.

To conclude, after careful consideration we determine that although the novel contains elements of both comedy and tragedy, the comedic element is more apparent. The opposing arguments have some merit but ultimately they fail to realise the true implications and context of The Great Gatsby.

The Great Gatsby is more of a Comic Novel than a Tragic Novel. (2020, Jun 02). Retrieved from http://studymoose.com/great-gatsby-comic-novel-tragic-novel-new-essay 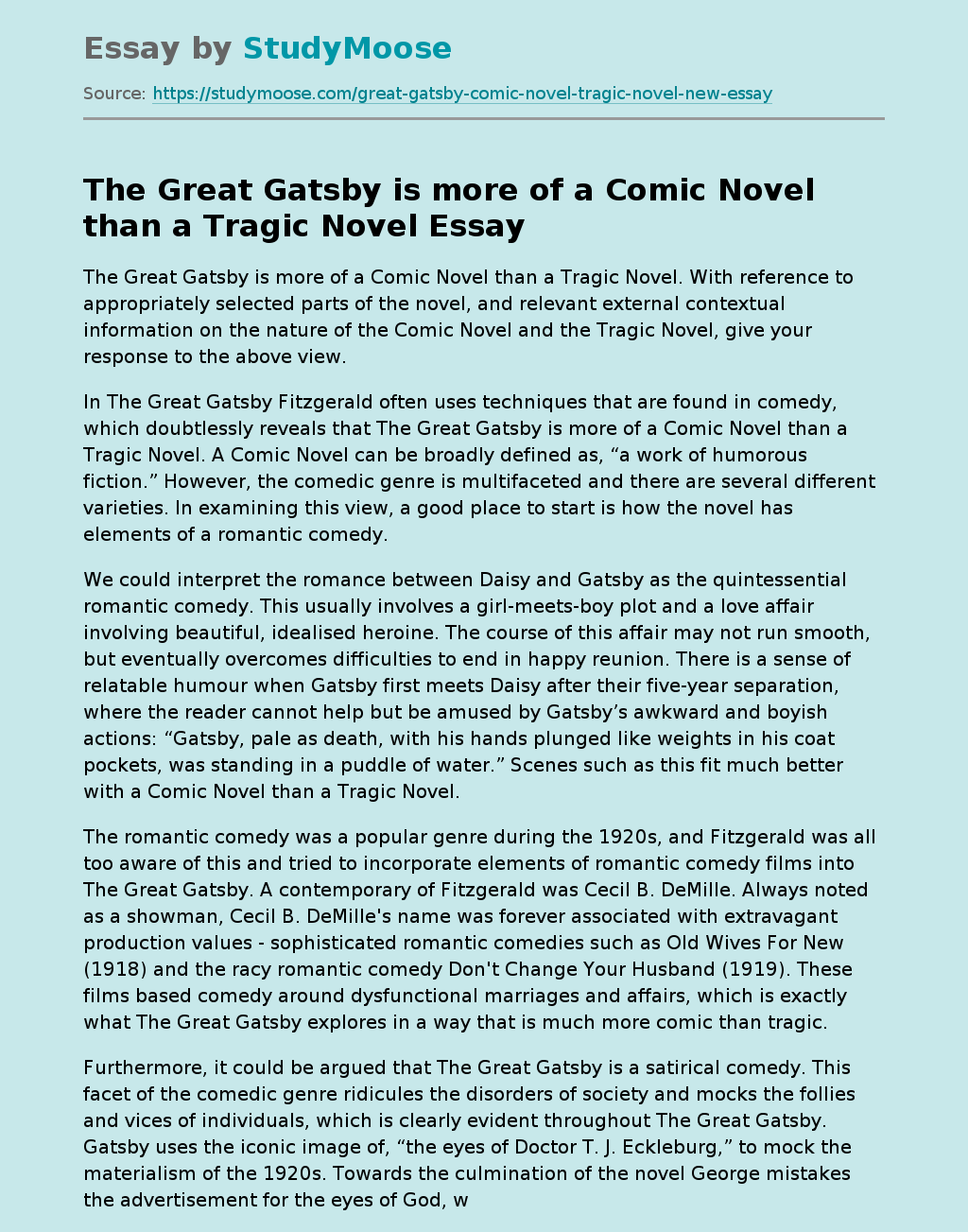