The Comic Scenes in Doctor Faustus

In any tragic or serious play, the dramatist tries to give relief to the audience by introducing comic scenes or episodes. The literary term for such comic interludes is known as tragic relief. A tragedy is bound to create tension in the mind of the audience and if this tension is not relaxed from time to time, it generates some sort of emotional weakness in the mind of the audience. Hence, comic scenes are a necessity to ease the tension and refresh the mind.

Turn in your highest-quality paper
Get a qualified writer to help you with
“ The Comic Scenes in Doctor Faustus ”
Get high-quality paper
NEW! AI matching with writer

There was a pressing demand from the side of Elizabethan audience for such interludes.

Hence, play wrights had to introduce such comic scenes as the producers also demanded them for a successful run of the play. The comic interlude may have an appropriate emotional connection in the development of the tragic play. But it is also admitted that in Marlowe’s dramas, this tragic relief seems to be crude and often verges on horseplay and buffoonery. For these scenes, it is often said that “Dr Faustus” is a powerful drama with a weak plot.

A close study of Marlowe’s famous play “Dr. Faustus” shows us that there are fourteen scenes in all. Out of them, comic scenes are five or six.

According to the critics, the comic elements in these scenes are low and vulgar, full of coarse buffoonery and they can not be accepted as organic parts of the tragic play. They are of the opinion that only in the first comic scene do we see worked out with some care a comic burlesque of the main plot.

Another objection on comic scenes in Dr. Faustus is that most of them are later interpolation and not from the mighty pen of Marlowe. Some of these critical arguments really hold good. If we study Marlowe’s play “Temburlaine”, we find him in the prologue to this play, proudly declaring that:

“From jigging veins of rhyming mother wits, And such conceits of clownage keep in pay, We shall lead you to the stately tent of war.”

This shows that Marlowe must have cherished a strong dislike for clownage conceits. Then it has also been found that the first edition of the play was published in 1604 and the second edition appeared in 1616. And the 1616 edition contains more scenes of clownage with new additions. So it proves that these scenes were not from the mighty pen of Marlowe. But there are also some prominent critics, including T.S.Eliot who assert that Marlowe was not devoid of a high developed sense of humour and Marlowe should not be judged by a Shakespeare standard in this respect.

Marlowe introduced the comic scenes in “Dr. Faustus” for many purposes.

• First, he had to introduce crude buffoonery because it was common stock-in-trade of the Elizabethan dramatists who could not ignore the demands of the groundlings. This was a pressing demand from the side of the Elizabethan audience. They even justify the inclusion of comic scenes in which Faustus teases and trouble the Pope and his guests, outwit the horse-dealer, and make a fool of the talkative knight, planting a pair of horns on his head. They are essential for dramatic purpose to enable Faustus to display his miraculous powers.

• Second, the purpose of the introduction of the comic scenes is to offer a temporary relaxation of tension engendered by the serious scenes.

• Third, Marlowe’s description about Faustus’ pranks on the Pope shows Marlowe’s hatred for church and Pope.

Now we take up the comic scenes one by one and discuss their quality and significance. We have five comic scenes in Doctor Faustus in which low comedy, burlesque and crude buffoonery have been introduced. These scenes are: Act-I, Scene IV; Act-III, Scene I, Act-IV, Scene I; Act-V, Scene ii, IV. Scene II in Act- I, in which Wagner cuts jokes with the scholars and confuses them may also be treated as a comic scene. According to the critics, the comic scene IV in Act-I where we find Wagner and the Clown engrossed in a debate is closely integrated with the main tragic theme. So this scene may be regarded as coming from the pen of Marlowe The same may be said about the scene in which Wagner is found perplexing and confusing the two scholars.

The scene, in which Faustus teases and troubles the Pope and his party, seems to be too crude and vulgar to come from Marlowe’s pen. But the Ralph-Robin episode, in the first and second scenes of Act-lV seems to have very little connection with the main theme of the play. The other two comic scenes, Act-IV, Scene iii, iv which show Faustus as playing an ordinary conjurer’s role either by making horns grow on the knight’s head or by outwitting and duping the horse-dealer are really crude and vulgar. Probably the only justification for including such farcical scenes was to cater to vulgar taste of the groundlings of that age. There are critics who maintain that excepting Scene IV of Act-I and Scene I in Act-III, all other comic scenes are later interpolations. But according to Boas, the two Ralph-Robin scenes are the only interpolations. We may just conclude with the very wise comments of Wynn on this topic:

“Nevertheless, Marlowe must be blamed for the utter incongruity of so many scenes with high tragedy. The harmony which rules the construction of Tamburlaine giving it a lofty coherence and consistency is lamentably absent from “Dr Faustus.”

Whatever may be the case it should be accepted that at least some of the clownage scenes, if not all, were later interpolations and Marlowe should not he blamed I for the low comedy and coarse buffoonery in such scenes.

The Comic Scenes in Doctor Faustus. (2016, Nov 13). Retrieved from https://studymoose.com/the-comic-scenes-in-doctor-faustus-essay 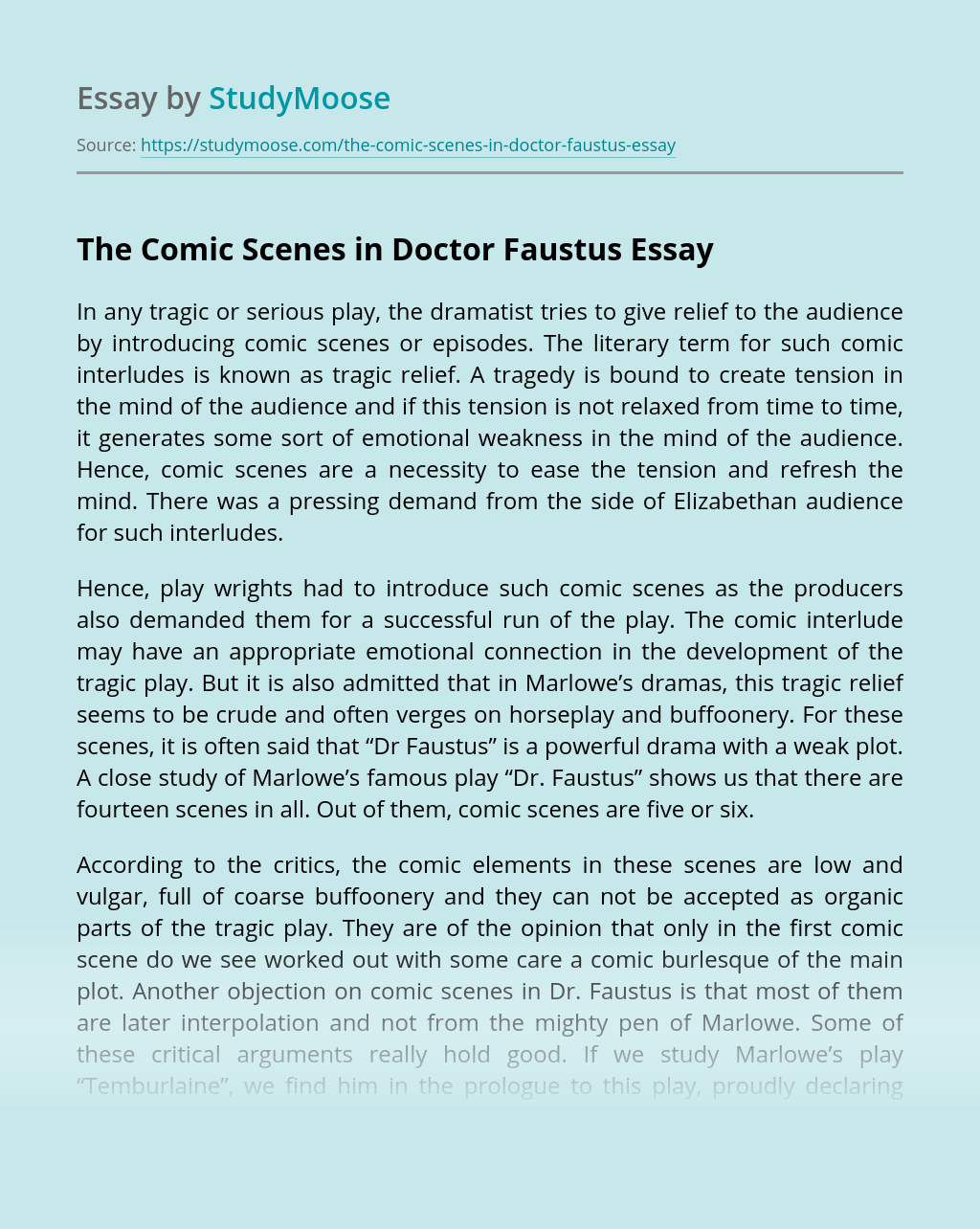 Turn in your highest-quality paper
Get a qualified writer to help you with
“ The Comic Scenes in Doctor Faustus ”
Get high-quality paper
Helping students since 2015
Stay Safe, Stay Original