The thought of how much technology people use on a daily basis can be frightening as one contemplates. From waking up to our alarm clock to going to sleep with the air conditioner on we are constantly using technology. The age we live in is known as the age of technology and the age of “progress”. Without a doubt, technology has made living much easier as an individual and as a society. Cars, trains, buses, and planes with air conditioning and the speed of a hundred horses has made traveling under any weather condition extremely convenient; so saying technology has not benefited people would be unrealistic.

Don't use plagiarized sources. Get your custom essay on
“ Have People Become Overly Dependent on Technology? ”
Get custom paper
NEW! smart matching with writer

In my opinion people have definitely become overly dependent on technology because of many reason. Much of my evidence presented are articles written, surveys conducted, and personal experiences that I have had. Articles have been written and surveys have been conducted to find out how dependent people are on technology. I am going to present quotes and evidences from articles and literature that explain how technology has grown in peoples lives and has taken over.

Chanie Kirschner presents some very interesting points on how people are overly dependent on technology in an article written less than a year ago; one of which is “when the internet is down, work is over for the day” this is true to a great extent (Mobile). Schools have let students out early because the power was out and no work could be done.

The second point is that “buyer’s remorse is much more common.” Internet shopping has become so common and convenient that people are forgetting how to handle cash and do not know from which store to buy a certain item from anymore since everything can be found online. The third point is that “you don’t live in the moment.” He gives an example that a parent goes to see the performance of his/her child and is too busy getting the camera to work or is looking through a screen that the actual experience is gone.

This also means that people are extremely dependent on technology and digital media to get information from anywhere in the world. Rather than letters and written statements people depend on videos and voice recordings which can easily be deceivable. The fourth point that Chanie gives is that “nobody knows a phone number.” Cell Phones have become so common that 90% of American Adults have a cell phone.

According to the above chart, the majority of Americans have a smartphone. Smartphones have the capability to contain documents, phone numbers, GPS and more. All which are capabilities that people depend on their phone for, without the phone people would not remember a phone number or even know

how to get around in their own city. Students are extremely dependent on spell check and auto correct that writing a paper by hand would be extremely difficult. The fifth point that was presented is that “You are dreading having to break up with your boyfriend face-to-face.” Although Chanie gave a personal example, it can still relate to the fact that people are too dependent on technology to communicate with other people. From relationships to online interviews, people are forgetting how to communicate with others face-to-face. The sixth point that was presented is that “Brick and mortar stores are going the way of the dinosaurs.” As I stated earlier in the paper, online shopping has become so convenient that small businesses and markets are going bankrupt and online businesses such as “Amazon” and “Ebay” are booming. The Final point that Chanie gives is that “Without your phone, you feel naked.” People are not only dependent on phones with their daily lives but with their health as well. A teenager that has lost his/her cell phone goes through psychological stress.

The punishment for a child that ten years ago used to be forbidding them to go outside and play is now taking away their electronics. The question to ask to understand if people are truly overly dependent on technology is, are they able to live without it? In a poll by CNET, 28 percent of people said they wouldn’t be able to live without high-speed Internet (America). Technology is slowly dominating people’s lives and is becoming a need rather than a want, like the author of an argumentative-persuasive essay writes, “Ultimately, we can say that ,”living without technology is like living without air” in this technical world of today.”

An article written by Ismat Tahseen titled “How dependent are we on technology” states “The survey — of 12,000 adults from Brazil, China, France, India, Indonesia, Italy, Japan and the US — found that about 61% millennials (those aged 18-24) believe that technology is currently making people less human. It revealed that despite being the digital native generation, 59% of millennials felt that society has become just too reliant on technology, a site reported” (Times of India).

It is obvious through the evidences and literature presented that people are become overly dependent on on technology. The example of schools being shut down is in of itself enough to understand that the education system today is so dependent on technology that it cannot continue without it. Along with business that cannot continue without coolers or registers or even lights. Overly depending on somthing or completely depending on somthing consist of the inability to continue without it for example the GPS that was stated earlier. If the GPS stops working on a road trip then the person would have to go to a store near by and ask for directions and the one giving directions can only know so much. A person leaves on a road trip fully depending on his car and GSP and does not even prepare for the worst case scenario which would be his car, phone, and GPS stopped working. This is a clear sign that people are overly dependent on technology.

Have People Become Overly Dependent on Technology?. (2016, May 15). Retrieved from http://studymoose.com/have-people-become-overly-dependent-on-technology-essay 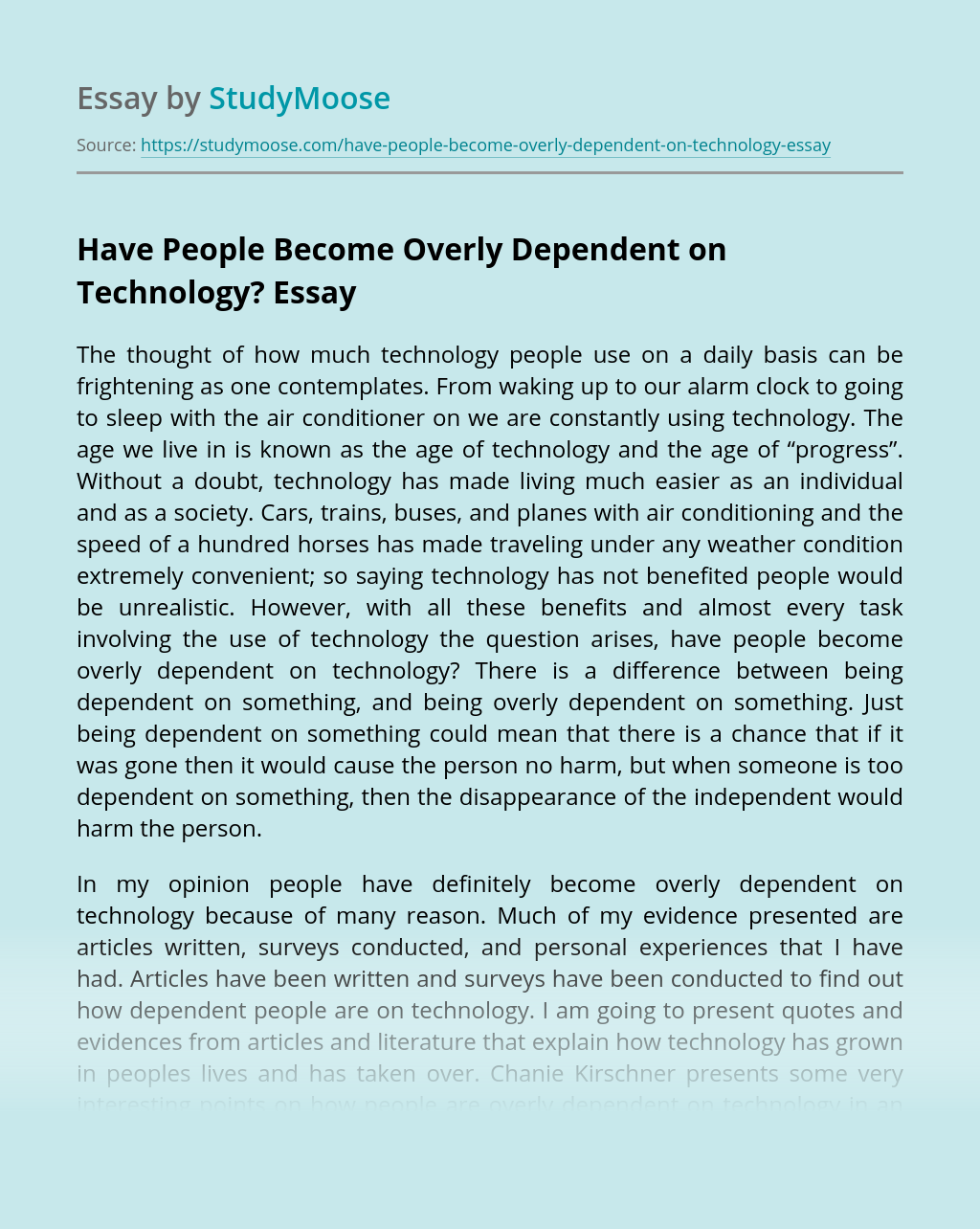