The Great Gatsby by F. Scott Fitzgerald is an American novel because it is classic and has entertained people for generations with its thought provoking issues and tragic pivotal characters. Two of the most intriguing ones are the men who have loved Daisy. Tom Buchanan and Jay Gatsby are different when it comes to society’s view, but they are also very much alike. They are both tragic figures even though they are tragic in completely different ways. Both Tom and Gatsby are good looking men.

Don't use plagiarized sources. Get your custom essay on
“ Comparison/Contrast of Tom Buchanan and Jay Gatsby ”
Get custom paper
NEW! smart matching with writer

They are both in their early thirties and they both have been a part of Daisy’s past. They have lots of money and have gone to good and important universities. They are intelligent men and they know a lot of the same people. They have things in their past that they would rather that people did not know. Gatsby’s main fear is that others will find out that he was born to a poor family and that Jay Gatsby that exists now was once James Gatz of North Dakota born in poverty.

The truth was that Jay Gatsby of West Egg, Long Island, sprang from his Platonic conception of himself.

He was a son of God—a phrase which, if it means anything, means just that—and he must be about His Father’s business, the service of a vast, vulgar, and meretricious beauty. So he invented just the sort of Jay Gatsby that a seventeen-year-old boy would be likely to invent, and to this conception he was faithful to the end.

(p 104) They hate each other and they are both having an affair with a married woman. Gatsby is the more likeable of the two. He is friendly, and he truly loves Daisy while Tom just wants to own her. Tom is more athletic than Gatsby because he has had more opportunities to play sports.

Tom is a racist and he thinks that not only are blacks beneath him, he also thinks that women, poor people, and people who have not always been rich are not as good as him. “Well it’s a fine book and everybody ought to read it. The idea is if we don’t look out the white race will be—will be utterly submerged. It’s all scientific stuff; it’s been proved. ” (p17) Gatsby welcomes all kinds of different people to his parties and he treats them all good. Tom got his money by being born into a very wealthy family and Gatsby has gotten his through organized crime and bootlegging.

That makes Tom more refined because he has always been rich. Gatsby learned how to be rich by working for another rich man named Dan Cody. Tom went to Yale University and he graduated. Gatsby went to a college in St. Olaf for a little while. Then he went to Oxford in England after they let officers who helped them in the war go there. He did not graduate because he did not have a good enough education when he came there. He does not tell people that he did not graduate. He just tells them that he attended Oxford. The fact that Gatsby did not graduate does not mean that he is not smart.

He would have had to be smart to obtain the money he did in such a short time. Many people bootlegged back then and were a part of organized crime, but they did not get rich, but Gatsby did. It was also very smart to come up with the plans that he did to get Daisy back into his life. Tom is intelligent enough to not lose his money and keep it working for him. He just does not use his intelligence for good. He reads books like the Rise of the Colored Empire so that he can hate people even more. Tom has had many affairs on Daisy.

He would rather people didn’t know about it even though he knows that Daisy does. Gatsby does not want anyone knowing anything about his past. He has made up an detailed lie about a past that did not happen just so people would not know that he had been a poor boy. Tom is also cheating on Daisy with Myrtle Wilson. Myrtle is married too. He is not only being untrue to his wife, but he is tearing up another marriage. Gatsby is also sleeping with a married woman. When we read the book, it is easy to want Gatsby and Daisy together, but it is still wrong.

He could wait and see if she left Tom, but he does not. He takes her while she is still married and living with Tom. Daisy picks Tom in the end for several reasons. Divorce was not seen as a good thing in the 1920’s and she would be looked down upon. She knows that Tom is her equal when it comes to social class, and Gatsby could never be. She and Tom are more alike that she and Gatsby. They are both users. She also has a child with Tom and that is a bond that is hard to break, especially since Pammy is so close to her father.

Tom Buchanan and Jay Gatsby are both tragic figures in the end even if only one of them dies. Jay because he did not achieve his dream that he had worked for so hard and Tom because he will never learn from his mistakes. Both characters are intriguing to the point that long after reading the novel, the questions of “what if Gatsby had lived”? and “what will happen to Tom in the crash of nineteen twenty-nine”? are pondered. They have become as real people to the ones who have read this fascinating novel. Works Cited Fitzgerald, F. Scott. The Great Gatsby. 1925. New York: Scribner Paperback Series, 1995. 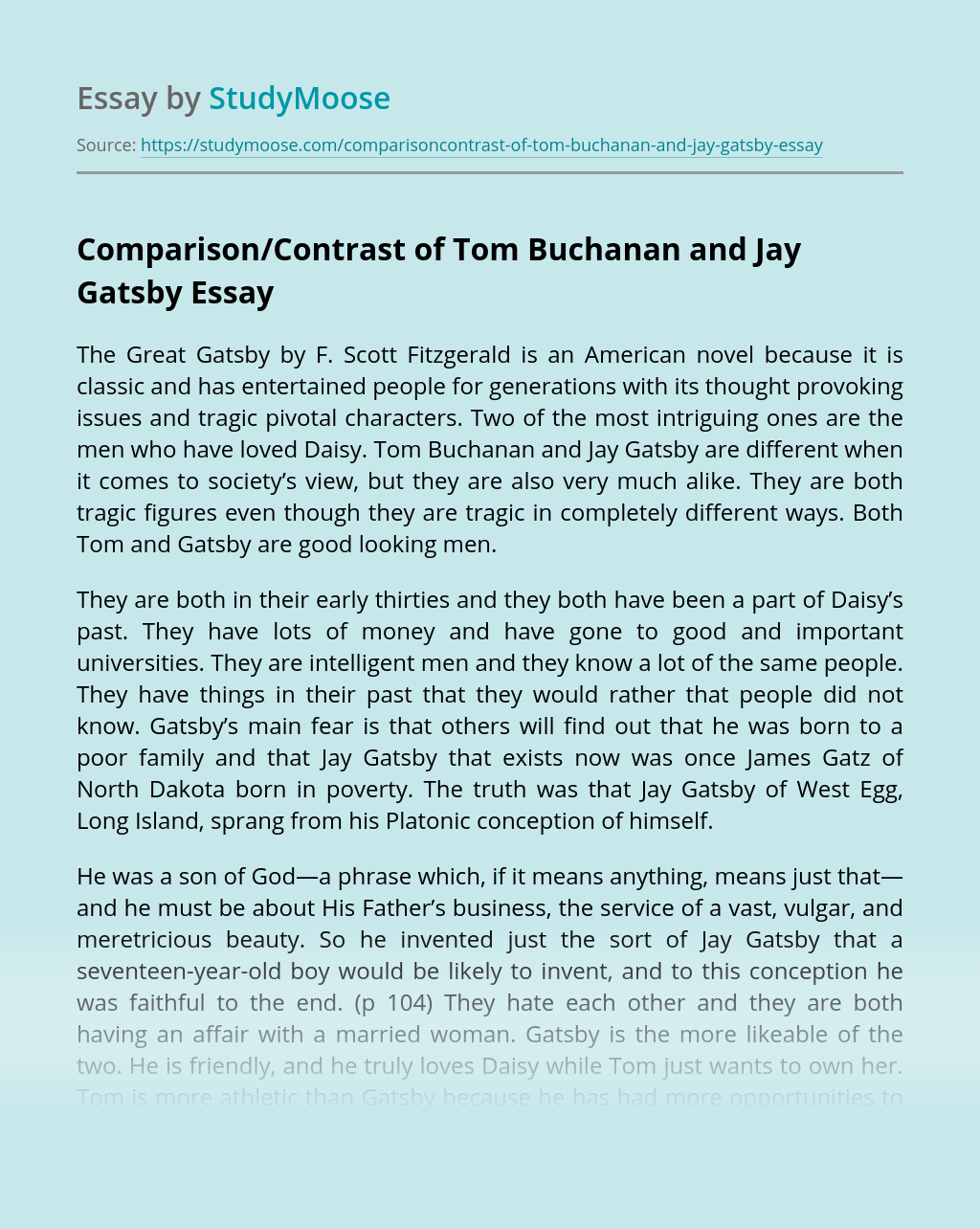