Creolisation is a top element of the Caribbean culture. It is a word derived from the word Creole; it however is not meant to just describe the Creole culture. It is a broad anthropological term used to describe the coming together of different cultural traits especially of the West Indies to form a new trait. This occurs when two or more languages are combined to give one unique language. In essence, Creolisation refers to the blending of diverse cultures to give one unique culture.

Turn in your highest-quality paper
Get a qualified writer to help you with
“ Caribbean culture ”
Get high-quality paper
NEW! AI matching with writer

( Ancelet et al, 2001) Nearly all the states of the Caribbean have “creolized” cultures.

From the Jamaicans, the Cajuns, the Bahamas, British Guyana etc. Their various cultures have been creolized. They all speak the language of their colonial masters in the pidgin form and have adopted certain cultures form their colonial masters. Like the drinking of processed liquor, smoking of cigarettes etc. These imperialist cultures have made several African countries’ economies to suffer. Country like Nigeria which used to eat the type of the imperial master’s food, his wine and wear his clothes spent fortunes of its country earnings to fund the importation of these items.

This led to a plunge in the fortunes of this country.

The Caribbean however are people that are very proud of their heritage. They designed their own music form (e. g. reggae) have their own drinks- which are largely influenced by the culture of their forefathers. Their food has however been creolized as it is influenced by imperialist cultures. Though it is still very much part of their own creation. In creolising, care must be taken not to change an existing culture completely. This fear is as captured by Appiah as thus: “Nevertheless, contemporary multiculturalists are right in thinking that a decent education will teach children about the various social identities around them.

First, because each child has to negotiate the creation of his or her own individual identity, using these collective identities as one (but only one) of the resources; second, so that all can be prepared to deal with one another respectfully in a common civic life. Much of current multicultural education seems to me to have these reasonable aims: let us call this weak version “liberal multiculturalism” (1997). ” From Appiah’s documentation, creolisation has been viewed from these perspectives: a.

creolisation as the major social and cultural fact about Caribbean life (what matters will of course be the social process but it may prove illuminating to proceed via linguistics) and b. Arnold’s accounts of i. Western culture as an amalgam of Hellenism and Hebraism, and ii. the English race as an amalgam of Celtic, German and Norman “bloods”. Considering the errors that are often linked with cultural talk, the creole context, and an Arnoldian perspective on the West or simply on England, both reveal that a culture lives, changes, innovates, is in a process of continuous evolution.

Where alternatives are to hand, this often means selection, not simply preserving and reproducing. It is not therefore a complete or necessarily coherent bundle to which we may add Gellner’s point about the multiplicity of nearly all cultures: the official first eleven has a fall-back for other occasions, scriptural Islam versus the dervishes. The Creole context makes it plain that there is nothing genetic in operation. More importantly, that context gives no one reason to think a culture will continue in the same old way. As noted already, we find proper examples in Trinidad or now in St Lucia.

Alleyne was sad to see that a form of Twi-Asante is “dying” (Alleyne, 1988) in Jamaica. There is reason for the Caribbean to regret that they no longer speak like Chaucer, or Arnold. One may regret death, but that does not entail that one would endorse immortality — we must move to a view that puts life and death in their place and accepts both. Or to return to less exalted matters, it may be pleasant to discover”retention” but it is not what makes or breaks a culture. “Transculturation” (Bolland, 2001) can be endorsed with out it. without it.

Economic integration will automatically come in with the achievement of cultural integration. This will provide for a bigger, more cohesive, stronger and unity front for which the Caribbean states can push for economic and political relevance in the world order. It is good to note however that there is a significant level of creoliastion in the Caribbean. They all speak an almost similar language; pidgin English, have similar music etc. however a lot can still be done in the creolisation of the in the Caribbean. Major impediments to a successful creolisation in the Caribbean are the influence of colonialists.

Different states of the Caribbean had different colonialists who set then in captivity, freed them and are now coming back in the name of neo-imperialism. The different states of the Caribbean speak the languages of their colonialists-maybe in the pidgin form. A perfect example of creolisation is with the Cajun language, which is a mixture of French and English and also African languages. Language is in general evaluatively neutral. As Macaulay pointed out long ago, there is no intrinsic basis in the language to prefer Latin to Chinook as a component of elite education.

If one thinks of culture by reference to conventions like language, there is scarcely any scope for evaluatively ranking exemplars, but if one focuses on the way culture operates as “an engineering program for producing persons” (Nerlich, 1989) then there is no more reason not to discriminate among them than there is not to distinguish a saint or an ordinary decent person from the likes of Pinochet or Burmese generals. “Moral” equality among persons is no bar to moral discriminations. Of course creolisation doesn’t provide us with a recipe.

There is still much difference of opinion on what has actually happened in the case of prototypical creoles and pidgins. But one lesson I would wish to draw from recent debates is that what is salient for ordinary usage (once upon a time, foreign-born, now whatever it is) or for some theoretical perspective (e. g. , origin in a colonial slave plantation) does not uniquely characterise the outcomes of contact situations. There are a host of types of language contact bringing with them a host of outcomes, perhaps depending on particular social or historical configurations.

Mufwene has enunciated his idealised and apparently deterministic version of this idea in relation to creoles, immigrant workers’ varieties, etc. by saying that “in all these cases of language contact we still deal with the same equation for restructuring; only the value of some variables keep changing” (Mufwene, 1997). Taking this in conjunction with the fact he has particularly stressed, that the categories we rely on have been taken from the contingencies of the social reality, not from theory, we find that what structurally or in some other respect are very similar situations become classified differently.

The terminology remains affected by the connotations attached to terms by metropolitan non-specialist users. So, speaking of American or Australian English, Mufwene remarks “there are other good socio-historical reasons why these varieties have not been called creoles: they developed in settings in which descendants of non-Europeans have been in the minority; and they have not been disowned by Europeans and descendants thereof” (Mufwene, 1997). References 1. Appiah, K. A. (1997). The Multiculturalist Misunderstanding, New York Review of Books, October 9, 2006 2. E. P. Brandon, (2001). Creolisation, syncretism, and multiculturalism 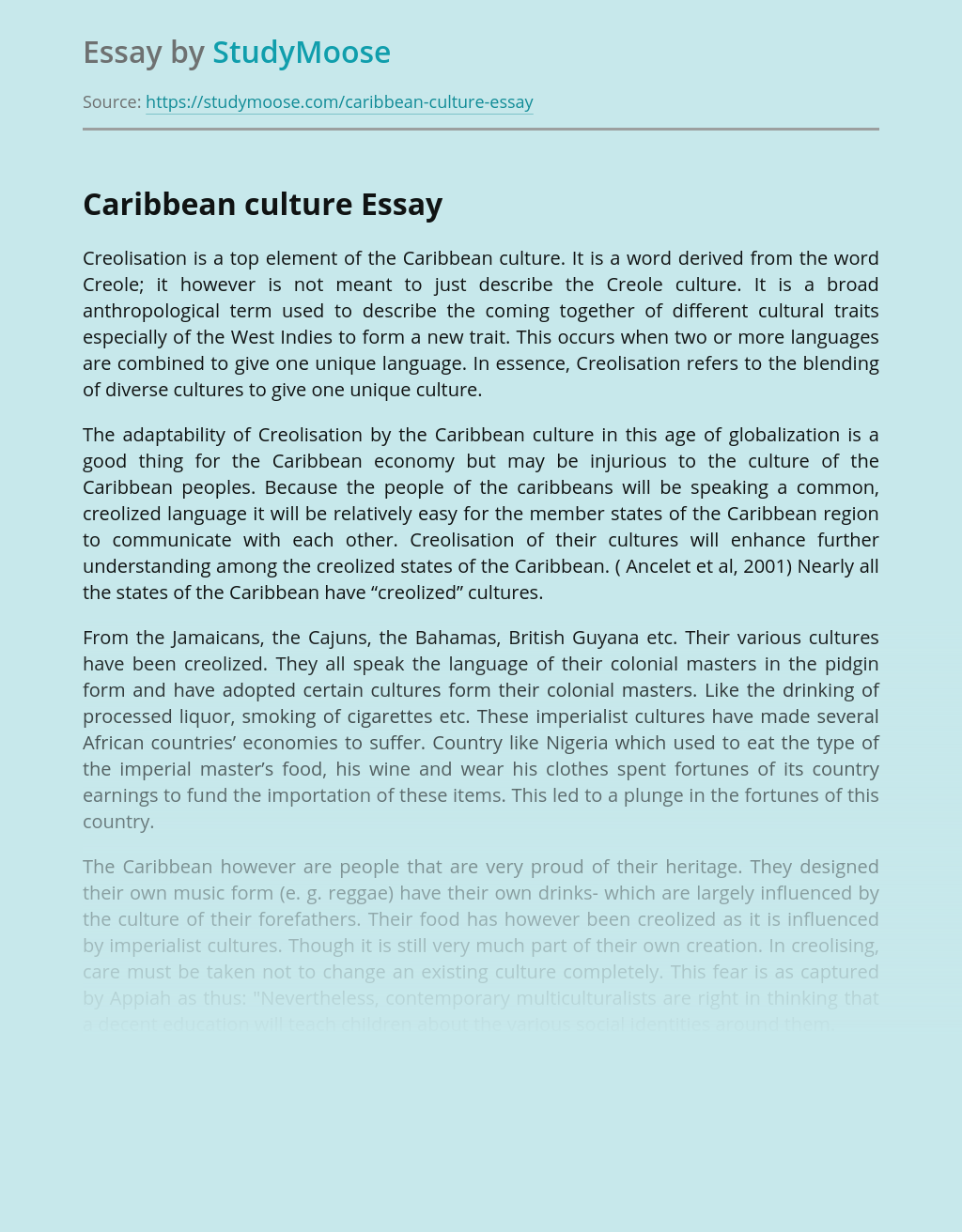 Turn in your highest-quality paper
Get a qualified writer to help you with
“ Caribbean culture ”
Get high-quality paper
Helping students since 2015
Stay Safe, Stay Original