Response for "The Destructors": themes, interpretations

“Chaos had advanced. The kitchen was a shambles of broken glass and china. The dining-room was stripped of parquet, the skirting was up, the door had been taken off its hinges, and the destroyers had moved up a floor. Streaks of light came in through the closed shutters where they worked with the seriousness of creators – and destruction after all is a form of creation. A kind of imagination had seen this house as it had now become.”

The Second World War had just finished and the boys were living in a hostile and indifferent world.

Don't use plagiarized sources. Get your custom essay on
“ Response for “The Destructors”: themes, interpretations ”
Get custom paper
NEW! smart matching with writer

They had had an idea, a dream, and using their imagination the gang had created a plan (p.176 “a wild invention”) to destroy Old Misery’s house. To accomplish their mission they needed energy, hard work and organisation, just like in a war. However, they weren’t doing it for hate, because hate requires a certain degree of passion and each and every one of them was cold-minded, and just followed the orders of their leader: Trevor, who was a mastermind of evil.

It’s clear that the gang wanted prestige, distinction and fame (p.174 “The fame […] been destroyed”); nevertheless it wasn’t just for that; they were doing it naturally and consciously and most significant: for fun. Destruction was part of them, maybe because they were “the sons of war” and they were living a period of transition when many important changes take place; but as far as I’m concerned, proportional episodes (with proportional consequences) happen nowadays.

This leads me to think that “destruction” is part of human nature.

Regarding their action, when the house was being smashed, sounds of carpentry were heard (creation) (e.g.: a clickety-clack, a bang bang, a scraping, a creaking …). The boys created destruction and they had to do it in a way so that nothing “build inside again was more beautifully than before”. “Beauty”, style and elegance was something they couldn’t allow. The question is why; as I said before, “destruction” could be taken as part of human nature, but perhaps this is always needed to create later. It could be considered as one more step in the ladder to produce changes. During this alteration disorder and uncertainty are present and it is normal from individuals to collectively (nations, corporations, mafias, gangs,etc) pull their skills and talents in order to overcome difficulties and make modifications. It’s like a cycle which is always necessary.

The problem is that in their cycle there had no immediate future. It was a need to exterminate leaving nothing but a spoilt landscape covered by rubble. Their plan had been as effective as an army or a missile. The place was clear for something new to be created, something different, but something human which soon or later would be also destroyed. These qualities inside members of the gang were the leftovers of the war. They had absorbed war and were part of its consequences.

Rounding off and as far as I’m concerned, the story’s theme is centred on the idea of destruction and creation, and how these two relate with each other. War and pos-war are deeply connected with this main idea in the story due to the fact that it was a period of transition; the gang was leaving between destruction and the creation of something new. I believe that war is the perfect example to understand human behaviour, and how ideologies or interests may lead to fights, battles, and the constant look for evolution and change whereas terrible consequences can be suffered by anyone, no matter their innocence and age (like the boys did).

Response for "The Destructors": themes, interpretations. (2016, Jun 25). Retrieved from https://studymoose.com/response-for-the-destructors-themes-interpretations-essay 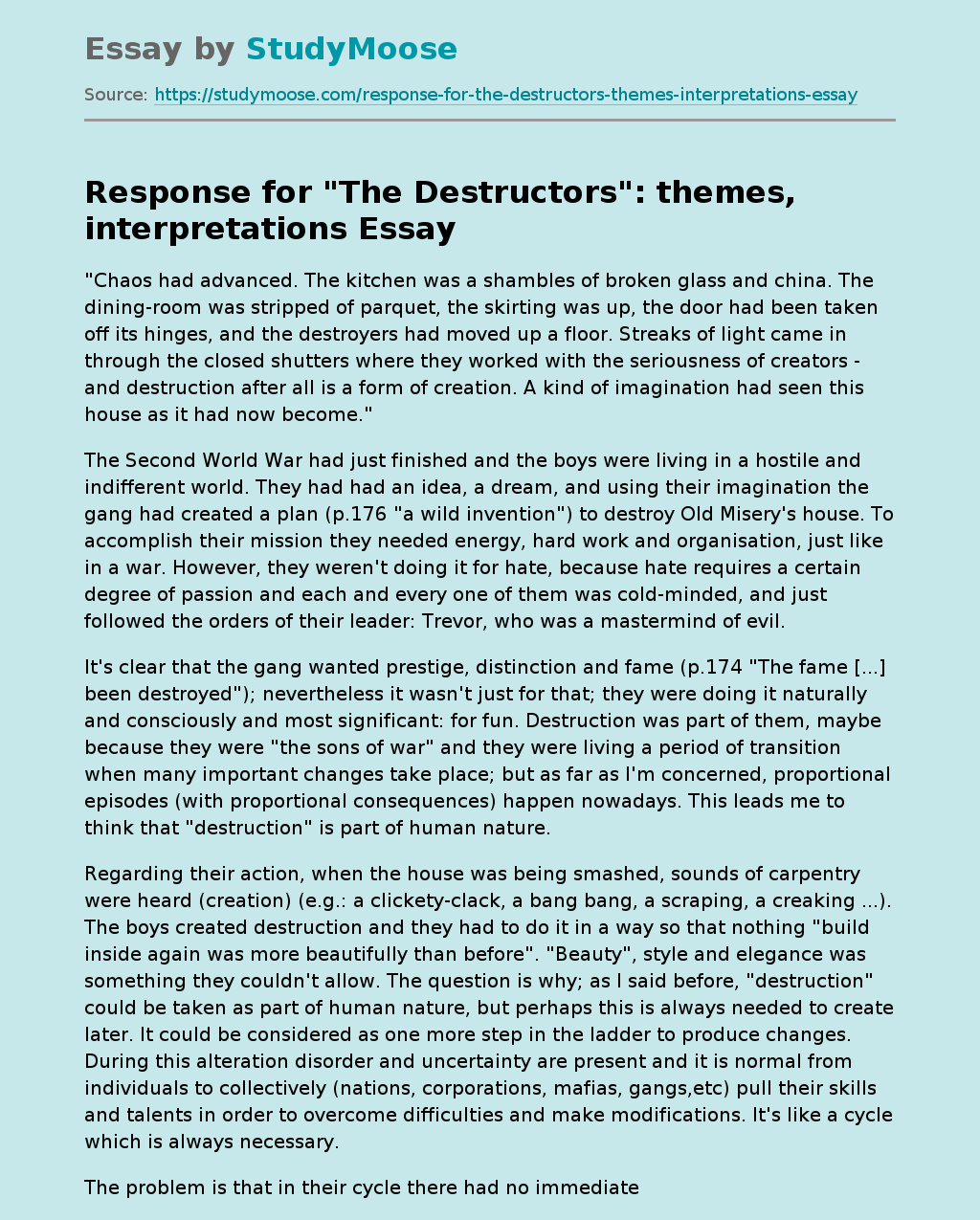