Talmud once said, “Ambition destroys its possessor. ” People who are overly ambitious will ultimately be destroyed on the way to the top. It is a warning that those who are not humble will stumble on their way to greatness. He enlightened a major event by one of the world’s most well-known writers, William Shakespeare. There were many conflicts in Shakespeare’s tragedy, Macbeth, but one of the major conflicts was Macbeth’s determination to become King.

Don't use plagiarized sources.
Get Your Custom Essay on Blind Ambitions Leads to One’s Destruction Just from $13,9/Page

Macbeth was a brave and courageous soldier who, unfortunately, let his blind ambitions lead to his downfall in the end. Three primary reasons this happened was because of his wife, his gluttony for power, and his betrayal toward his friends. The first example is Lady Macbeth, otherwise none his wife, who wants power and will do anything to get it. The second example is Macbeth’s growing lust for power after he kills the king. The last significant example is when Macbeth kills his friends and their families.

His wife, his gluttony for power, and the betrayal of his friends exemplify of what it truly means to be blinded by a want for something that is potentially untouchable in the end. First off, Lady Macbeth is Macbeth’s sneaky wife who convinces him to kill the king. King Duncan was a trusting man who loved and respected Macbeth. Lady Macbeth’s thirst for power all started when she received a letter from her husband. The letter mentioned how the three witches told Macbeth that he was going to become Thane of Cawdor and now he wants to celebrate, but doesn’t want Lady Macbeth to tell anybody.

After she reads the letter, she looks up and says “Yet do I fear thy nature; /it is too full o’ th’ milk of human kindness/To catch the nearest way: thou wouldst be great, /Art not without ambition, but without/The illness should attend it” (1. 5. 3-7). Although Lady Macbeth didn’t have any hard feeling towards Duncan, she wanted to be queen. She was willing to do anything to achieve her goal. Overall, even though she knows her husband wants to be king, she thinks he is too weak to actually pursue what is wanted.

Moreover, Lady Macbeth’s thirst for power fed Macbeth’s want for power. At first, Macbeth was very hesitant and scared to kill Duncan because he thinks that there will be consequences awaiting him in the next world. “If it were done when ’tis done, then ’twere well/It were done quickly. “If the assassination/Could trammel up the consequence, and catch/With his surcease/success; that but this blow/Might be the be-all and the end-all here, /But here, upon this bank and shoal of time, /We’d jump the life to come” (1. 7. 2-7).

More specifically, Macbeth says that if he could achieve his goals merely by killing Duncan, without any consequences here on Earth, he would risk the dire consequences that could await him after death. Furthermore, Duncan was his friend who had high respects for him as a soldier. After Macbeth killed Duncan, his lust for power grew more and more with each passing day. Furthermore, Macbeth’s lust for power led to the betrayal of his friends. One day, while Banquo was in the forest, Macbeth sent 3 murderers to assassinate him.

Banquo was Macbeth’s best friend, a brave and noble general. His children, according to the witches’ prophecy, would inherit the throne of Scotland. Macbeth murdered them to eliminate threat. Banquo was also ambitious like Macbeth, but those thoughts never translated into actions. In addition, Macduff was a Scottish nobleman who was the leader of the crusades. He was opposed to Macbeth becoming King from the very beginning. The witches told Macbeth that Macduff had gone to England and to get back at him, Macbeth killed Macduff’s wife and son.

The crusade’s mission is to place the rightful king, Malcolm, on the throne, but Macduff also wanted revenge on Macbeth. “If thou beest slain, and with no stroke of mine, /My wife and children’s ghosts will haunt me still” (5. 5. 18-19). Macduff also wants Macbeth’s head because he thinks his wife and kid’s ghosts will haunt him forever if someone else kills Macbeth. Even though ambition is a good quality to have, it can still have tragic results if it becomes the center of a person’s life.

In Macbeth’s case, there were three many concerns that caused Macbeth’s downfall Lady Macbeth, a growing lust for power, and the betrayal of loved ones. Lady Macbeth is a deeply ambitious woman who thirsts for power and will do anything, even corrupt her own husband to obtain the position as the queen. Macbeth’s want for power came from his wife’s lust for power. The gluttony for power that was caused by Lady Macbeth led Macbeth to do murderous things such killing the king and his best friend. Ultimately, sometimes it’s not always the goal that leads to one’s destruction, but the path they choose to make it happen. 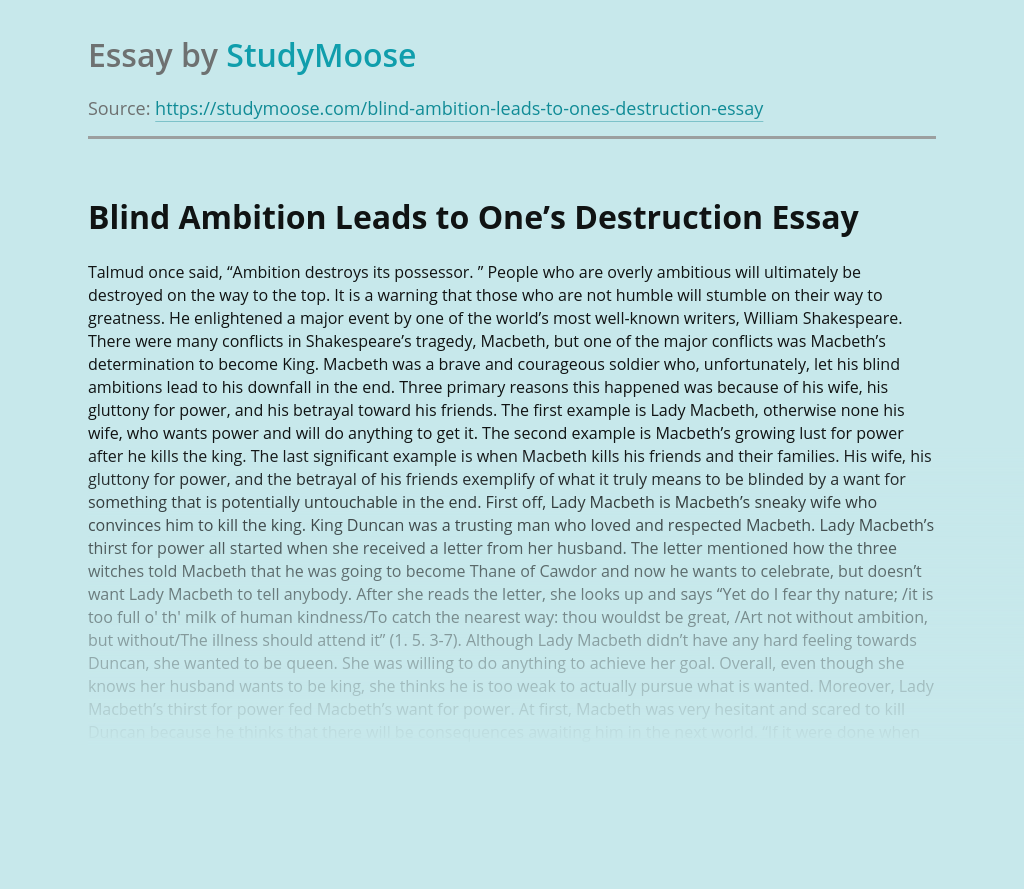 Rate this post An analysis of the character Banquo’s soliloquy in Shakespeare’s “Macbeth” Banquo In Macbeth, a play by William Shakespeare, Banquo’s soliloquy at the beginning of the third act explains some of his present feeling towards Macbeth. He believes that Macbeth killed to become the King of Scotland. He explains that he is the...

Macbeth as a Character vs the Real World

Get Essay
The Gulling Scene of Benedict

Rate this post The gulling scene of Benedict is Shakespeare’s expedition of trickery and deception. The method in which deception and disorder exist in the scene leads to the comedy through Benedicts overemphasized reaction physically and in facial expression in addition to in the entire scene we are in on the joke. The only factor...

The Different Types of Love in Romeo & Juliet

Rate this post There are many types of love that are portrayed in Shakespeare’s play “Romeo & Juliet”. One of them being sincere, dignified love that both the main characters, Romeo and Juliet, have for each other. Although it seems that Romeo and Juliet do love each other with true, whole-hearted love, it does seem...

The Merchant of Venice Shylock

Rate this post In the play The Merchant of Venice Shylock, a rich Jewish moneylender in Venice agrees to loan Bassanio three thousand ducats on Antonio’s guarantee. Shylock is made to be the villain in the Merchant of Venice because of some of the things he does. But even though he may not have been...

Rate this post My Mother has just spoken with me about marriage to man called Paris. But ‘it is a honour I do not dream of’. I just cant believe that my parents want to marry me off so young, I was only considering it to keep my parents happy, but this evening changed my...

Rate this post S1-At the beginning of the scene, why does Benvolio think that there will be a fight? Benvolio says it is hot out and the Capulets are out. He also says in hot weather, like the kind they are experiencing, anger is easily triggered, resulting in a brawl that the two will be...

Rate this post William Shakespeare’s Macbeth is a tragedy set in 11th century Scotland. The play revolves around a most loyal man, Macbeth, and his ultimate rise and fall from power. Macbeth is a brave and courageous man, until his life changes after encountering 3 witches who give him two predictions. These two predictions, along...