One Lie Leads to Another Lie

A lie is like a bacteria. It multiplies fast. One lie leads to second, second to third and so on. A person then forgets where he started the lie and where it is going to end. He finds himself in a vicious circle of lie, from where there is no way out. There is a story of a boy named Raju who lived with his parents and sister in a small town. He was a good, obedient son. When the boy was in class IX, he got into the company of some wicked boys.

Don't use plagiarized sources. Get your custom essay on
“ One Lie Leads to Another Lie ”
Get custom paper
NEW! smart matching with writer

With them, he started indulging in all sorts of mischief. He started bunking classes and his attention from studies got diverted.

His parents were unaware of his activities. They thought his son is busy in his studies. The friends were very cunning. They encouraged him to bring money from his home. One day Raju told his mother, he needed money to buy books. His mother happily gave him the money.

He and his friends spent the money in smoking and gambling. This was his first lie. Gradually he became a habitual liar. His grades became poor and so instead of showing his report card to his parents, he forged their signature. Once he stole money from his mother’s almirah. When his parents enquired, he put the blame on the domestic servant.

The parents naturally believed him and threw the servant out of the house. The lies of Raju increased day by day. One day he asked his father to lend him his bike for one day.

He said that his friend’s father is in hospital and he needed to go to see him. As usual, he took the bike for indulging in his mischievous activities. He along with his friend were riding at top speed breaking all traffic rules. One poor old man was going on his bicycle. The bike hit him from behind and he fell on the ground. Raju and his friend also fell. The old man was injured badly. The bike was also damaged.

The crowd started gathering. Raju became afraid and he and his friend ran away leaving the bike behind. In the evening, Raju’s father enquired about the bike. He again lied that the bike was at his friend’s house. Raju could not sleep that night. He kept thinking what he will say to his father the next day about the bike. The next day he went to his friend’s house and they kept thinking what to do next. His father’s bike had been seized by the police after the accident. One of his friends suggested that he should tell the entire truth to his father. But Raju did not have that much courage.

He decided to invent more lies to save his skin. He thought of a plan and cooked up a story. That evening Raju returned home screaming and bewildered with his clothes torn. His parents were shocked to see him in this state. They asked him what happened to him. Raju just could not speak anything. He asked for water and fell flat in the bed. After half an hour, he became a bit normal. Then he related his story. He said that he along with his friend were going on the bike to bring medicines for his friend’s father. They parked the bike outside the chemist’s shop and went inside to purchase the medicines.

When they came out, they saw that a man had unlocked their bike and had just started it. Raju shouted, but the man started riding it at full speed. Raju and his friend stopped an auto rickshaw and asked him to follow that bike. The bike went out of the town and into the highway. They followed him. In one lonely spot, the bike turned into a kachcha road leading to the forest. Now the auto could not go there. So they descended from the auto and started running alongthat path. The biker had disappeared. They started running here and there in his search. They had entered into a dense forest.

They could hear no sound except their own heartbeat. They decided to return back. When they had walked a few hundred meters back, they saw a few men directly in front of them. They were rough guys and were armed with gun. The bike lifter was also with them. Now they knew that they were in great difficulty. The men started abusing and thrashing them. They requested them to leave them and promised that they will not report the incident to anyone. It was only then the men left them, and warned them never go come to that place. They also threatened them not to inform the police.

Raju’s parents were shocked to hear all this. But they were happy that their son was safe. His father told him to forget all this and said that we should not risk our life for a bike. He said we will get another bike and also decided not to report to the police. Raju was very happy. His plan had succeeded. By his lies he had succeeded in fooling his parents. But destiny had something else in store. The police who had seized the bike after the accident, traced the address of Raju’s father from the number given on the bike. Next day morning, the police arrived at their house. Raju’s father was at home.

They told him all about that accident. The old man hit by their bike was still in hospital. His legs were badly damaged. Raju’s father was deeply ashamed to hear of his son’s deeds. He could never imagine that his son had spoken one lie after another to hide his guilt. Had he spoken the truth instead and faced the situation, he would have felt proud of him. But his son had proved to be too weak. Raju’s father decided to bear all the medical expenses of the old man. He decided to teach his son a lesson. As a penance, he ordered Raju to look after the old man till he gets recovered completely.

He would also have to do all the household chores of the old man. At first Raju felt bad. But he had no option other than to obey his father. As he started serving the old man, he started losing his bad habits. The old man also taught him the importance of truth and honesty. He said that by speaking lie one can succeed once or twice, but the person gets corrupt morally. A person who speaks the truth is always at peace. He never fears anyone. Everyone respects and admires him. After this incident, Raju improved considerably. He left the company of his bad friends. He promised his father, that he would never speak a lie.

Essay 2. One Lie Leads to Another Lie – Decision and Consequences

Saira was a sixteen-year-old girl. She belonged to a middle class family and had a friend, Amna, who belonged to a very rich family. Amna was not good at studies like Saira and talked all the time about fashion, jewellery, concerts and parties, etc. Saira also wanted to do all the things that Amna did. One day Amna told her that she is going to Pak Towers with some other friends and asked her to join them. Saira knew that her parents would never allow her to go with Amna but this time she really wanted to have fun so she decided to go with them. Amna was very happy that Saira would be joining them.

Next day, Saira told her mother that she would be late from school as there was an extra class. She felt uneasy about lying to her parents but then she was satisfied telling herself that this was fun she deserved.

After some days Amna again asked her to join them as they were going to some concert and she wanted her to go too. Saira again gave the same reason to her parents knowing that there’s no way they would ever find out and thus these excuses continued, her studies were also affected.

One day her mother noticed that some money was missing from her purse as well as from father’s drawer. Saira knew that if her mother found out that she had stolen the money, she would be very cross. As she was very afraid and did not want her mother to find out that she goes out with Amna and had stolen money for that purpose, she lied and said she did not know about it.

Her mother started scolding their maid thinking that she was the culprit. The maid was terrified and started crying, which made Saira feel guilty. She thought for a moment and realized that it would be very wrong for the poor maid to be punished for a crime that Saira had committed. She was frightened deep inside but she also wanted to save the innocent maid so she decided to lie yet once again. She ran to her mother and said that she had stolen the money to buy some books to get good grades. Her mother was astonished and told her that next time she should ask her for the money.

When her school progress report came, Saira’s mother was very annoyed. She scolded her a lot and told her that she will talk to her teacher about the matter. This was the worst time in the sixteen years of her life. She realized that each lie puts a person in more trouble than the one she was already in. She set aside her fear and told the truth and made a firm resolve never to lie again.

One Lie Leads to Another Lie. (2016, Nov 10). Retrieved from http://studymoose.com/one-lie-leads-to-another-lie-essay 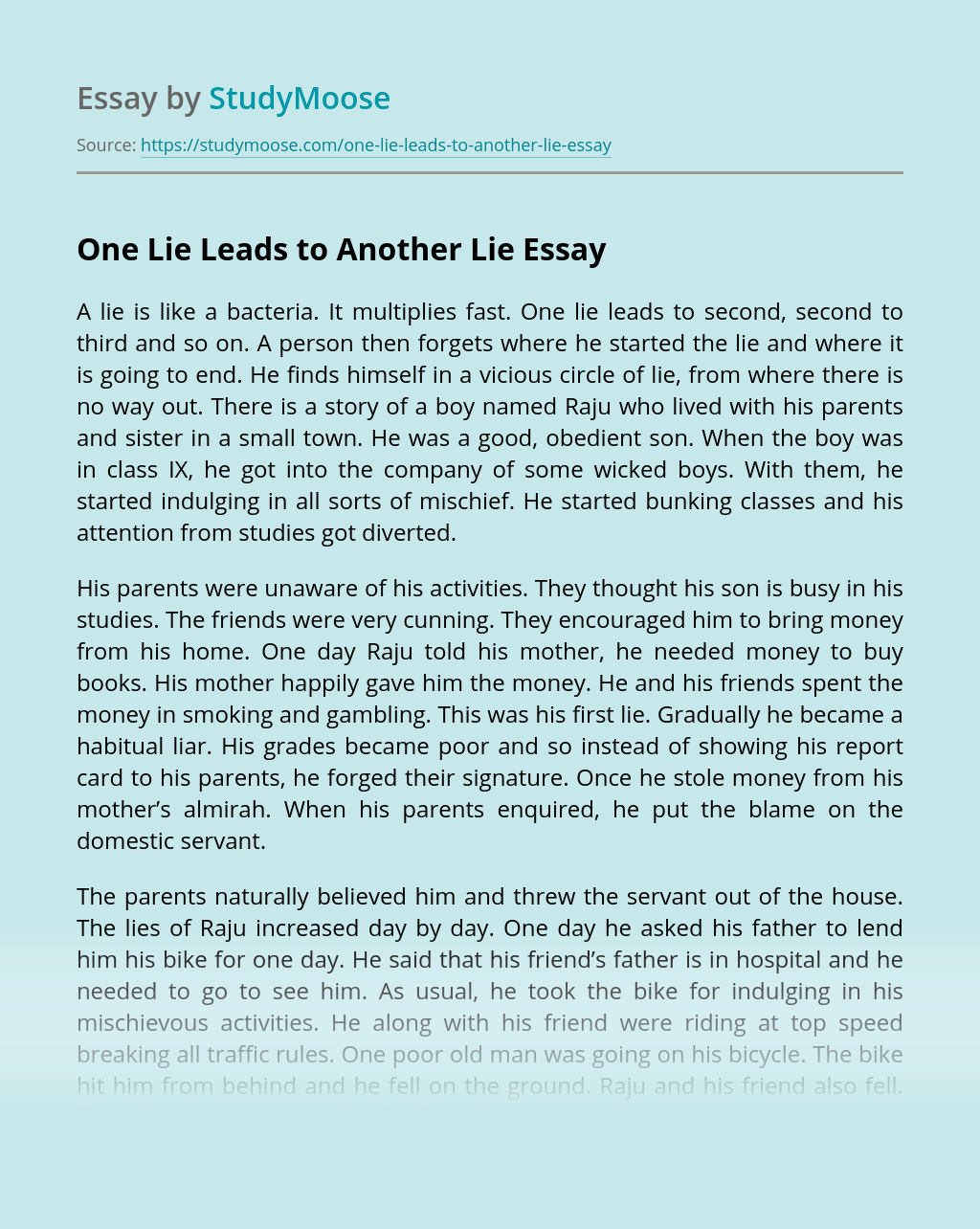