"The Go-Between" by Ali Smith

About sixty years ago the United Nation adopted the Universal Declaration of Human Rights. It was a moral milestone against the human rights crimes. The first of the thirty articles states that all human beings are born equal in dignity and rights. But the Universal Declaration of Human Rights is not fulfilled everywhere. All over the world refugees are treated after the local rules and not even close to be treated the way they are subjected be. The writer of the short story, “The Go-Between”, Ali Smith is taking her starting point article thirteen.

Don't use plagiarized sources. Get your custom essay on
“ “The Go-Between” by Ali Smith ”
Get custom paper
NEW! smart matching with writer

“Everyone has the right to leave any country, including his own, and to return to his country.” Article 13.2, Universal Declaration of Human Rights.

Ali Smith wrote this short story to celebrate the 60th anniversary of the proclamation. The reader follows a 33-years-old man from Cameroon. He has nothing left except a shirt with the Cameroon team colors, so the reader may think this is his home country.

He is now located in the northwestern part of Africa, in the country of Morocco. He live his life as a border crosser. This means that he helps refugees to cross the border between Africa and Europe. It is possible to cross the border of Africa and Europe on the African continent because Spain has a colony in the northern Morocco called Ceuta. The main character is the “Go-Between” between the refugees and the French Doctors in Spain. Because of his “profession” as a border crosser, he has a very rough past.

He has seen torture of the refugees as they were caught in the action of the climb of the fences between Africa and Europe. But that is not all: “We stood there at the foot of the fence, I was all blood from my ear but I was happy” (p. 2 ll. 15-16)

He has lost an ear and a finger to an underwater fence during some of the border crossings.

The main character is a divided man. He cannot figure out where to live or what to do with his life. A part of him wants to move to Spain. “I dream when I’m asleep that I’m walking down the big streets of Madrid with their fine white stately buildings…” (p. 5 ll. 112-113) In his dreams he wants to go to the Iberian Peninsula, but when he finally is in Ceuta in Spain he doesn’t feel at home and nobody notices him in the streets. He is divided. It will be a big loss to him if he moves from his “home” in Africa. He will lose a major part of himself and his personality if he runs away from his life and Africa. This is a reason why he doesn’t suffer from the “Spanish blindness” that most of the refugees are. “I don’t have this particular blindness” (p. 4 ll. 76) This “Spanish blindness” is an illness most of the refugees have because they don’t see anything but Europe in their future. They are willing to do whatever they have to do in order to get over the fence and onto solid European ground.

The main character doesn’t suffer from this strange illness, he just wants to help other people to pursue their dream in Europe. And he does that because he knows that no one leaves their houses and their homes unless they are forced to leave. He had been forced to move from his home in Cameroon and gives now the kind of help to the refugees that he didn’t get when he was forced to flee. The short story is written in first person which gives the reader the feeling of an authentic story. Ali Smith engages the reader with feelings and thoughts from the main character, and this makes the reader feels like the main character tells the story specific to him/her. This makes the reader feel like he/she is a part of the story by being in a conversation with the main character. The structure of the short story is a bit messy. The narrator switches between deferent situations and the different stories in the short story. It is a bit confusing, but it keeps the reader interested.

Ali Smith wants this short story to be an eye opener for the population who don’t know anything about the violations of the laws. Ali Smith wants to set focus on the problem and have a debate started about the fulfillment of the Universal Declaration of Human Rights, instead of turning the blind eye to the inhumane treatment. In the short story Europe is pictured as heaven. A place where it is nearly impossible to go even though we have the Universal Declaration of Human Rights. Everybody has the right to seek asylum in other countries for persecution. But that is not what the reader sees in this short story. The refugees are simply sent back to where they came from without any possibilities of asylum. Throughout the short story we hear about the refugees’ hard conditions. Torture and inhumanity is a part of the everyday for the innocent refugees. Even though Europe is one of the spokesmen for the Universal Declaration of Human Rights we have to remember it is the European border police who assault the refugees. We, as European citizens have to make sure the proclamation is fulfilled. 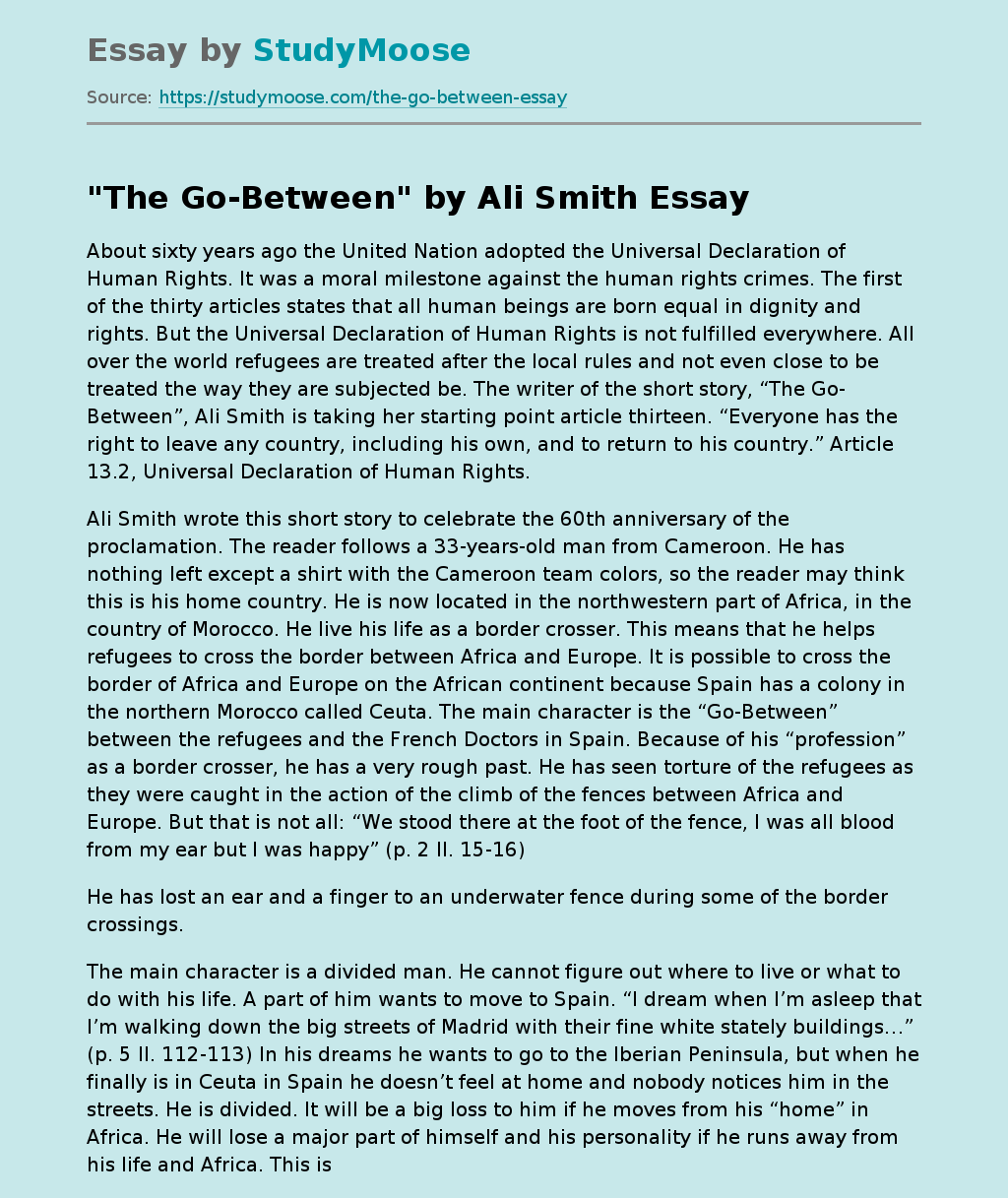