Abu ‘Ali al-Husayn ibn Sina is better known in Europe by the Latinized name “Avicenna. ” He is probably the most significant philosopher in the Islamic tradition and arguably the most influential philosopher of the pre-modern era. Born in Afshana near Bukhara in Central Asia in about 980, he is best known as a polymath, as a physician whose major work the Canon (al-Qanun fi’l-Tibb) continued to be taught as a medical textbook in Europe and in the Islamic world until the early modern period, and as a philosopher whose major summa the Cure (al-Shifa’) had a decisive impact upon European scholasticism and especially upon Thomas Aquinas (d.

Primarily a metaphysical philosopher of being who was concerned with understanding the self’s existence in this world in relation to its contingency, Ibn Sina’s philosophy is an attempt to construct a coherent and comprehensive system that accords with the religious exigencies of Muslim culture. As such, he may be considered to be the first major Islamic philosopher.

The philosophical space that he articulates for God as the Necessary Existence lays the foundation for his theories of the soul, intellect and cosmos.

Furthermore, he articulated a development in the philosophical enterprise in classical Islam away from the apologetic concerns for establishing the relationship between religion and philosophy towards an attempt to make philosophical sense of key religious doctrines and even analyse and interpret the Qur’an. Recent studies have attempted to locate him within the Aristotelian and Neoplatonic traditions. His relationship with the latter is ambivalent: although accepting some keys aspects such as an emanationist cosmology, he rejected Neoplatonic epistemology and the theory of the pre-existent soul.

However, his metaphysics owes much to the “Amonnian” synthesis of the later commentators on Aristotle and discussions in legal theory and kalamon meaning, signification and being. Apart from philosophy, Avicenna’s other contributions lie in the fields of medicine, the natural sciences, musical theory, and mathematics. In the Islamic sciences (‘ulum), he wrote a series of short commentaries on selected Qur’anic verses and chapters that reveal a trained philosopher’s hermeneutical method and attempt to come to terms with revelation. He also wrote some literary allegories about whose philosophical value recent cholarship is vehemently at odds.

His influence in medieval Europe spread through the translations of his works first undertaken in Spain. In the Islamic world, his impact was immediate and led to what Michot has called “la pandemie avicennienne. ” When al-Ghazali led the theological attack upon the heresies of the philosophers, he singled out Avicenna, and a generation later when the Shahrastani gave an account of the doctrines of the philosophers of Islam, he relied upon the work of Avicenna, whose metaphysics he later attempted to refute in his Struggling against the Philosophers (Musari‘at al-falasifa).

Avicennan metaphysics became the foundation for discussions of Islamic philosophy and philosophical theology. In the early modern period in Iran, his metaphysical positions began to be displayed by a creative modification that they underwent due to the thinkers of the school of Isfahan, in particular Mulla Sadra (d. 1641). 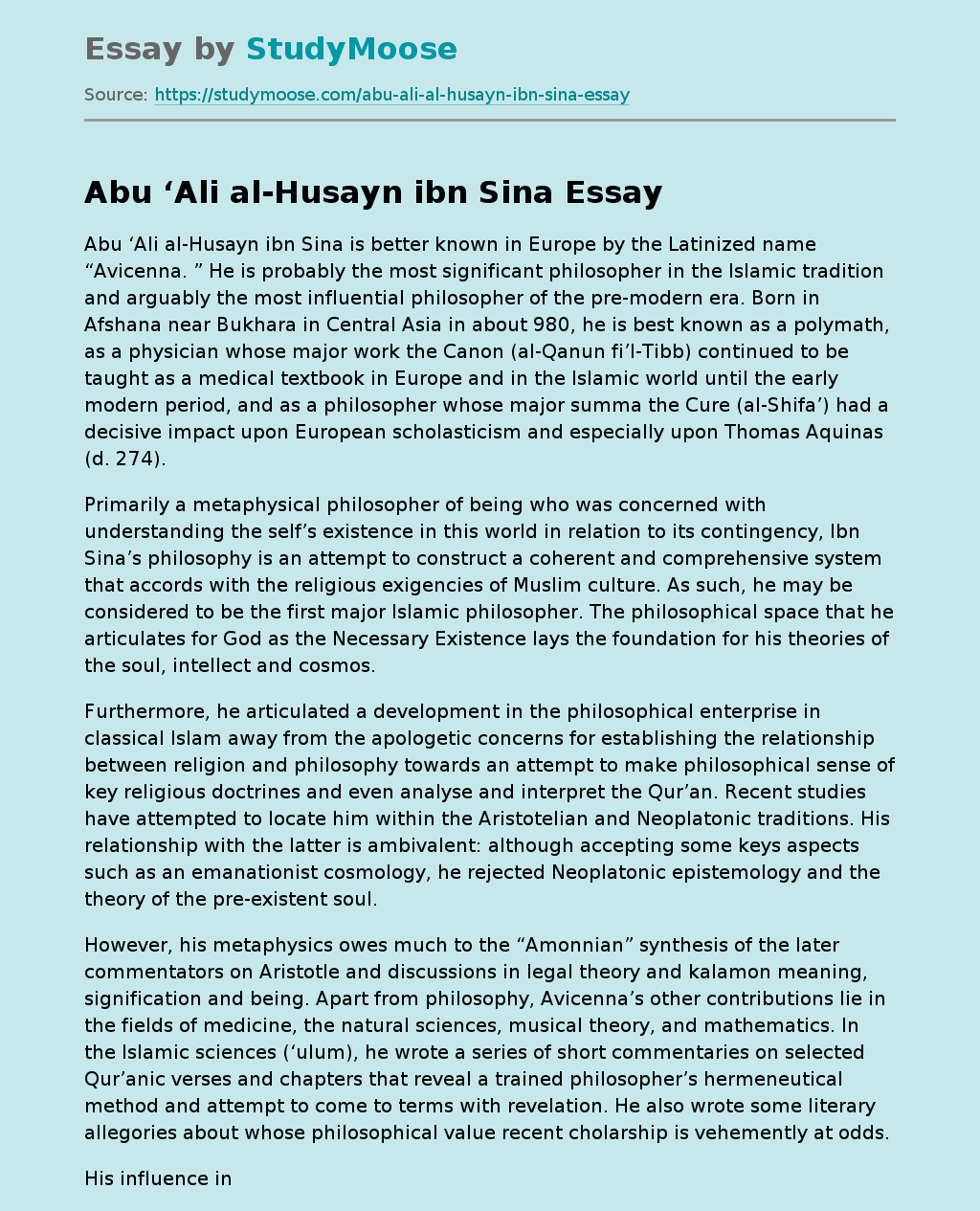