Amongst the descendants of Hazrat Ibrahim A.S., Hazrat Ali A.S. belonged to the line of Quraish.

Don't use plagiarized sources. Get your custom essay on
“ About Hazrat Ali ”
Get custom paper
NEW! smart matching with writer

When the Prophet (PBUH) of God was thirty years old, Ali (A.S) was born on 13th of Rajab in the 30 year of Aamul Feel inside the sacred Kaaba. Family Background Amongst the descendants of Hazrat Ibrahim A.S., Hazrat Ali (A.

S) belonged to the line of Quraish. He was the son of Abu Talib, son of Abdul Muttalib of the distinguished tribe of Bani Hashim. His mother Fatima bint-e Asad was also a noble lady belonging to the tribe of Bani Hashim whom the Prophet (SAW) regarded as his own mother.

The responsibility for bringing him up devolved directly on Hazrat Muhammad (PBUH) who devoted all his time and attention towards nurturing. It was owing to his inherent merit and capabilities coupled with the privilege of being brought up by the exalted personality of a guardian like the Prophet (SAW) that when the Prophet (PBUH) announced his Prophet hood Hazrat Ali (A.S)., though only ten years old, became his foremost follower and testifier of his claim.

The first thing that the Prophet (PBUH) did on his arrival in Medina was to solemnize the marriage of his only daughter, Fatima Zahra with Ali A.S. The Prophet (PBUH) deeply loved his daughter and had so much respect for her that whenever she came to him he used to stand up in reverence. It was in the first year of Hijrah when the Prophet (PBUH) chose Ali A.S. for this honor. The wedding rites were performed with utmost simplicity. (a) He got three sons (Hasan, Husain and Muhsin), and two daughters (Zainab & Umm-i-Kulthum) from her. The youngest son, Muhsin died in childhood. After the death of Hazrat Fatimah he married a number of wives from time to time: (b) Umm al-Banin bin Hizam from whom he got ‘Abbas, Ja’far, ‘Abdullah and Uthman. All of these except Abbas were martyred at Karbala. (c) Saila bint Mas’ud who gave birth to ‘Ubaidullah and Abu Bakr. They were martyred at Karbala. (d) Asma bint Umais who gave birth to Yahya and Muhammad Asghar. (e) Sahba bint Rabi’a who gave birth to Umar and Ruqayyah.

(f) Amamah bint Abil ‘As: She was daughter of Zainab (R.A.), daughter of the Holy Prophet (Sallallahu ‘alaihi we Salaam). Hadrat Ali got Muhammad Aswat from her. (g) Khaulah bint Jalfar who gave birth to Muhammad ibn

(h) Umm-i-Sa’id who gave birth to Ummul Hasan and Ramlah Kubra. (i) Mahyah bint Ummul Qais, she gave birth to a daughter who died in childhood. Jihad In first battle of Islam, which is known as the battle of Badar Hazrat Ali had his first experience of fighting a battle? At that time he was He was only twenty-five years old. There were important battles of Uhud, Khandaq, Khaibar and lastly Hunain in which Ali A.S. accompanied the Prophet (SAW) and exhibited his incomparable valor as a warrior. Almost in all these battles Ali (A.S) held the office of standard-bearer also. In all these battles he exhibited indomitable valor and steadfastness. In these engagements, as in others, he showed utmost firmness, tolerance and nobility of character.

Because of his bravely Hazrat Ali was popularly called “Asadullah”(The Lion of Allah). He was also known as Al-Murtaza, Al-Amir-ul-Mo’mineen. As Caliph Hazrat Ali (RA) was elected as Fourth Caliph after, the martyrdom of Hazrat Usman (RA), at a time when the world of Islam was in great turmoil In 35 A.H. the Muslims offered the office of Islamic Caliph to Ali (A.S). At first he refused, but when the insistence on part of the Muslims increased, he accepted it on the condition that he would rule strictly in accordance with the precepts laid down in the Quran and the Sunnah (practice) of the Prophet (SAW) without favor and partiality towards anybody.

He was the greatest Mujtahid and jurist of his time and one of the greatest of all times. Justice was part of his soul and spirit and was attached to his heart. His administration steered clear of partisanship, favoritism or nepotism.

Besides participating in Jihad he was never averse to do anything for the sake of the Prophet S.A. and Islam. The tasks that he had to perform were of diverse nature. He was responsible for writing down treaties and letters. He was also the custodian of the recorded portions of the Quran. Besides, he was deputed to Yemen by the Prophet (SAW) for the propagation of Islam. As a result of his successful preaching, the entire Yemen embraced Islam.

Alas, this protagonist of peace, equality and Islamic values could not escape the malicious designs of the worldly people. In the morning of 19 of the month of Ramadan 40 A.H. while offering prayers in the mosque he was fatally wounded by a sword dipped in poison. Ali A.S. spent two restless days on his sick bed in extreme pain and distress. Eventually the poison spread all over the body and he breathed his last on 21 of Ramadan at the time of morning Prayer. Hasan A.S. and Husain A.S. performed the funeral rites and that prince of humanity was buried at Najaf at the back of the city of Kufa.

Distinguishing Publications NAHJAL BLAGHA AL- SAHIFAYE ALAVIYA The two mentioned books consist of sermons, letters, and sayings of Hazrat Ali (A.S). Nahj al-balaghah comprises various issues that cover major problems of metaphysics, theology, tafsir, hadith, prophetology, imamate, ethics, social philosophy, politics, administration, civics, science, literature, etc. Most of the discussions about various theological issues and philosophical notions in Islam have their origin in very book. The book not only reflects the spirit of early Islam and the teachings of the Quran and the Prophet (saw) in the proper perspective, but also serves as a guide to traverse the future in the light of these teachings.

The importance of the Nahj-ul-Balagha lies in two dimensions. First, it speaks about the fundamental of Islam such as the matters concerning God, the human being, Islamic views of humanity, prophet hood and its position in human history a means of understanding Islam and thus necessary for us to study. Secondly, the Nahj-ul-Balagha refers to the social problems of a hypocritical society with which we deal today. Accordingly, this book can be a source of Inspiration for us as regards to the social and political problems of life and the possible solutions to them. It is a matter of regret that Nahj al-balaghah was not properly utilized by the Muslims as a source book of Islamic philosophy, kalam, fiqh, and ethics due to misconceptions about its attribution to Hazrat ‘Ali (A.S) In the presence of strong and sufficient evidence in support of the contents of the book being authentic, it was sheer prejudice and lack of the spirit of inquiry that was responsible for neglecting such a reliable source of Islamic ideas.

Thoughts on Principal Subject Hazrat Ali’s letter to Malik-e-Ashter throws light on the importance of the principles of administration and justice as dictated by Islam. The following instructions in the form of a letter were written to him by Hazrat Ali, when he appointed him as Governor of Egypt.

It (the letter) deals with the duties and obligations of rulers, their chief responsibilities, the question of rights and obligations, dispensation of justice, control over secretaries and subordinate staff. In it Hazrat Ali advises Malik: 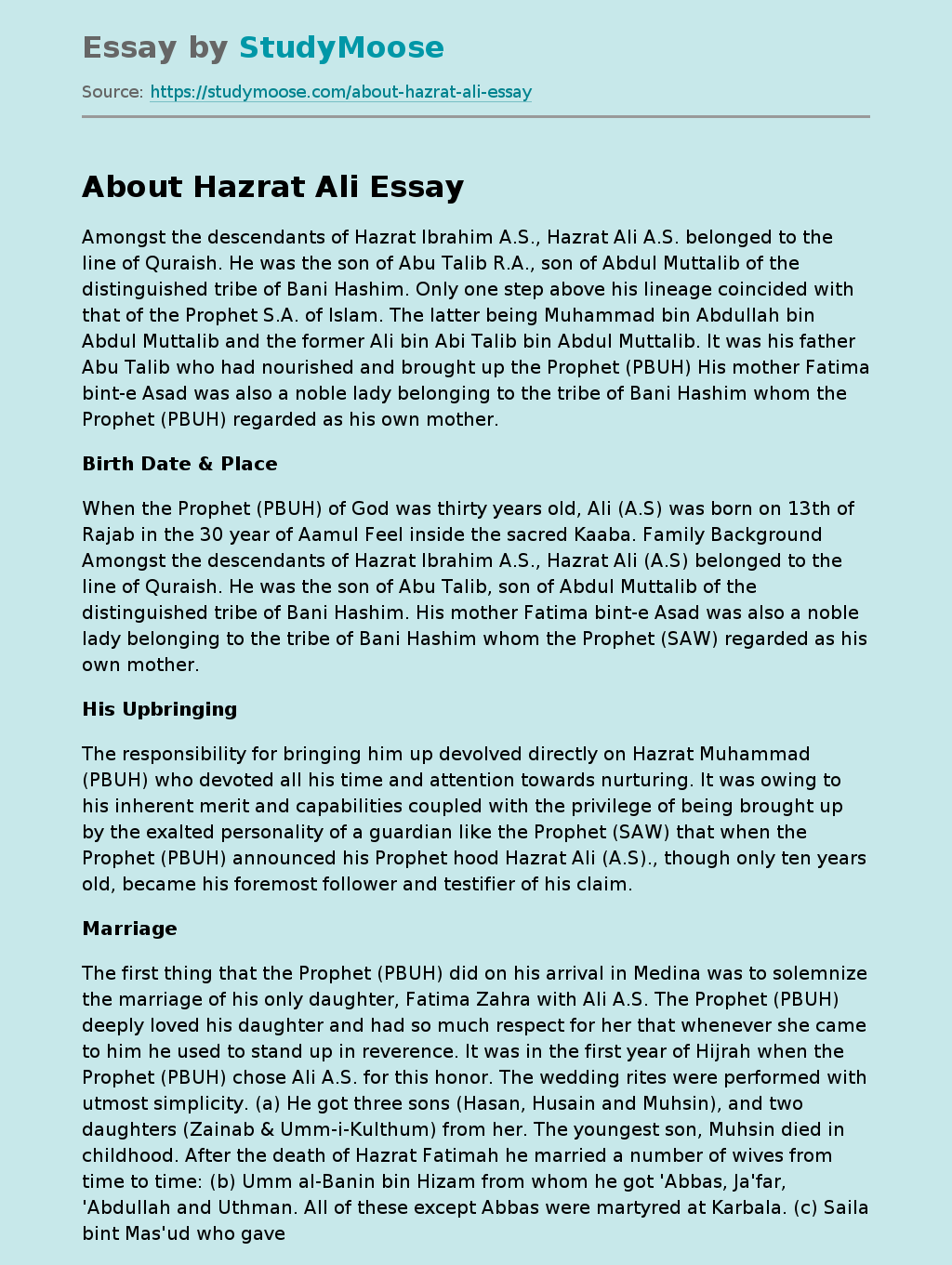