My Hero In History

“A hero is a man who does what he can.” (Romaine Rolland) The true definition of hero is a man of distinguished valour. Bravery, courage, boldness, daring, resolute, and aptitude in war are a hero’s characteristics. However, a hero is understood to be different to everyone. “The legacy of heroes is the memory of a great name and the inheritance of a great example.” (Benjamin Disraeli) Some of them are born, others are made. Many are still living while many others have long been gone.

Don't use plagiarized sources. Get your custom essay on
“ My Hero In History ”
Get custom paper
NEW! smart matching with writer

Important dates and events are usually marked red in the calendar to remind us of their birth or death anniversary. During the celebration of these events, program speakers take turns admiring to high heavens whatever good they had done for the county. “True heroism consists in being superior to the ills of life, in whatever shape they may challenge us to combat” (Napoleon) When one thinks of heroes, names such as Muhammad Ali Jinnah, Allama Iqbal, Muhammad Bin Qasim, and Alexander often come to mind.

These people had done a lot of favours, courage, helps, and more of all things for the people who needed them.

Muhammad Ali Jinnah as a Hero

The definition of heroism changes with the context of time. Heroes of the past are not necessarily heroes of present time and vice versa. But there are some people who have made their mark on history. Among those legends Muhammad Ali Jinnah is my hero. “Few individuals significantly alter the course of history.

Fewer still modify the map of the world. Hardly anyone can be credited with creating a nation-state. Muhammad Ali Jinnah did all three.” (Stanley Wolpert) Quad-e-Azam Muhammad Ali Jinnah is the founder of Pakistan. He was born in Karachi on 25 December 1876. His father was a merchant. He received early education at Sindh-Madrasa-tul-Islam in Karachi. After that, he passed the matriculation at the age of 16 from Bombay. He moved to England after marriage, at the age of 17. In 1896 he returned to India as barrister when his father’s business was ruined. He started practice in Karachi but soon shifted to Bombay.

“The heroic soul does not sell its justice and its nobleness.” (Ralph Waldo Emerson) He became a member of Indian National Congress. Soon he left the Congress and joined Muslim League when he realized that Congress is not sincere to Muslims. He fought for the rights of Muslims. “A hero is someone who understands the responsibility that comes with his freedom.” (Bob Dylan) Quaid-e-Azam was a dynamic leader. He devoted himself fully to the affairs of the Muslim League. He worked for the separate state for the Muslims. He continued his struggle to achieve this object.

Pakistan came into being on 14th August 1947. “Self-trust is the essence of Heroism.” (Ralph Waldo Emerson) Quaid-e-Azam became the first Governor General of Pakistan. He worked day and night for his county. He fell ill and died on 11th September 1948. He was a Muslim and hero. “A hero is some who has given his or her life to something bigger than oneself.” (Joseph Campbell) Quaid-e-Azam will always live in the hearts of the Pakistanis as” The Father of the Nation.” “Heroism is the divine relation which, in all times, unties a great man to other men.” His words, “Unity, Faith and Discipline” will always inspire the people in their struggle for nation building. “A man of courage is also full of faith.” (Cicero)

My Hero In History. (2016, Sep 07). Retrieved from https://studymoose.com/my-hero-in-history-essay 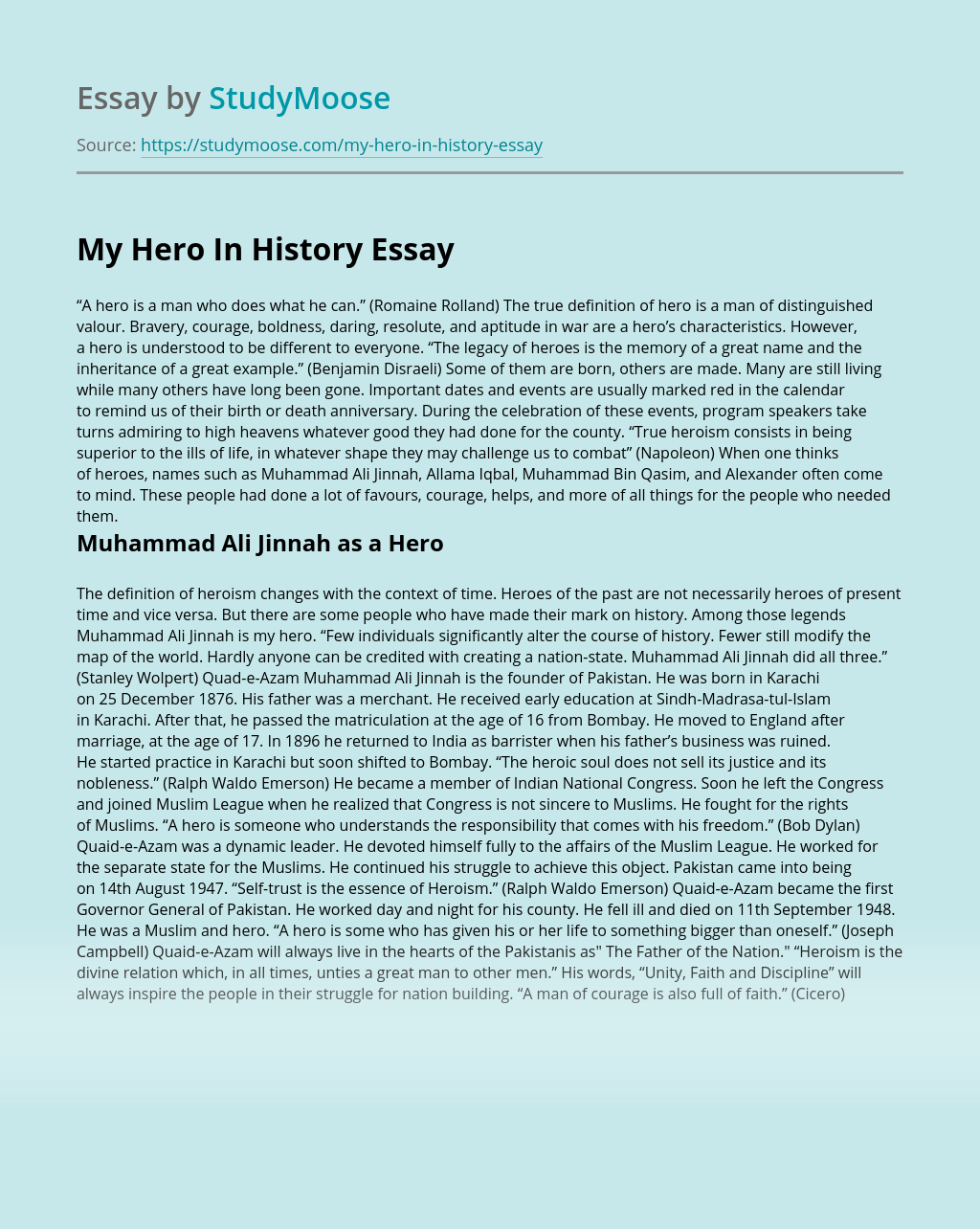