This biography will include the following events of Fatima Jinnah’s life: Early Life. Career & Work. Political Life. Death.Early Life:Fatima Jinnah was born on July, 30 1893 at Newnham Road in Karachi, British India. She was the youngest among her seven siblings. Her father named Jinnah Poonja was a merchant of Karachi. Among her siblings, she resembled with her brother Muhammad Ali Jinnah who became her guardian after the death of her father in 1901. After informal schooling at home for four years, in 1902 at the age of 9, she went to Bandra Convent in Bombay to get her initial education while remain lived in hostel.

Don't use plagiarized sources. Get your custom essay on
“ This biography will include the following events of Fatima Jinnah’s lifeEarly LifeCareer ”
Get custom paper
NEW! smart matching with writer

Again in 1906, she was admitted to St.Petrik High School khandala, Bombay. She passed her matriculation in 1910 from Bombay University. In 1913, she passed Senior Cambridge Examination as a private candidate. In 1919 at Calcutta, she enrolled in Dr Ahmed’s Dental College, University of Calcutta and was completed her graduation as a dentist in 1923.Career & work:After her graduation, she opened her own dental clinic at Abdur Rahman Street, Bombay in 1923 by the support of her beloved brother.

Besides, she also worked at Municipal Clinic where she provide free treatment to poor patients. But in 1929 she closed her clinic and decided to took care of her brother because her sister-in-law ,Rattie Jinnah was died that year. In 1930, she went to London and there she attended Round Table Conferences along with her brother and lived there for four years and made her English language perfect to spoke. From 15 to 18 October 1937, she attended the sessions of All India Muslim League (AIML) at Lucknow with her brother Jinnah.

This biography will include the following events of Fatima Jinnah's lifeEarly LifeCareer. (2019, Aug 20). Retrieved from https://studymoose.com/this-biography-will-include-the-following-events-of-fatima-jinnahs-lifeearly-lifecareer-essay 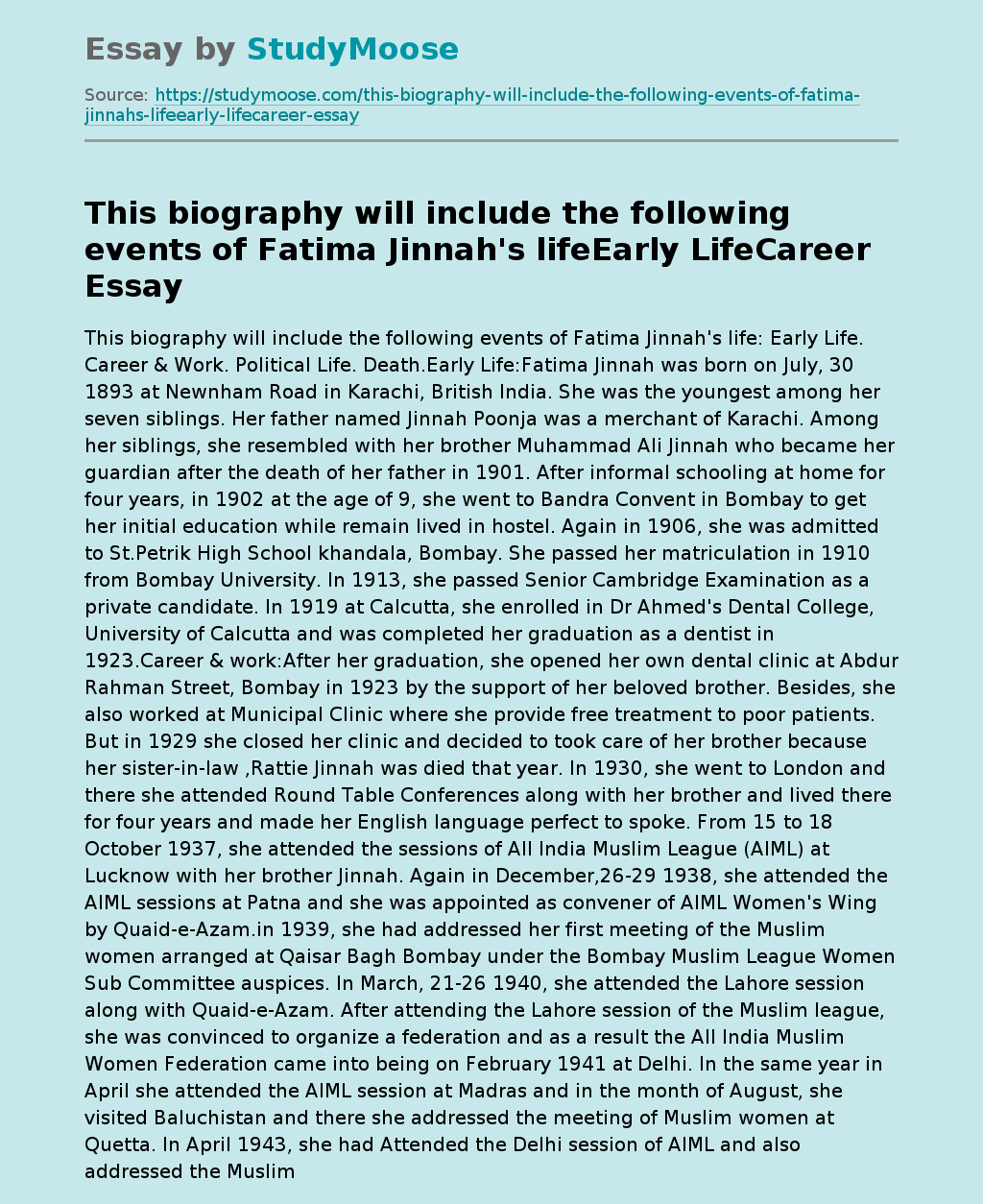