Life and Career of Mariah Carey

With her unique talent and signature vocal abilities, Mariah Carey commanded the world’s attention when she made her musical debut in the early nineties. In less than a decade, Mariah Carey emerged as one of the most popular and widely acclaimed talents in music. As a singer and songwriter, Carey has been recognized with the most prestigious accolades in the industry, including two Grammy Awards, Billboard’s “Artist of the Decade” Award and the World Music Award for “World’s Best Selling Female Artist of the Millenium” to name a few (IMDb.

Don't use plagiarized sources. Get your custom essay on
“ Life and Career of Mariah Carey ”
Get custom paper
NEW! smart matching with writer

com). As the best-selling female performer of all time, Mariah Carey has continuously raised the bar and set the standard of excellence within the music industry worldwide. With a mother who shared both talent and a love of music, Carey was destined for a life of song, having been named after “They Call the Wind Mariah” a melody from a popular Lerner and Loewe musical. From an early age, Carey demonstrated extraordinary musical abilities.

She started singing at the tender age of four and her innate talent quickly progressed.

While attending middle school, Carey began honing her songwriting skills and upon high school graduation she immediately left for New York City to pursue a lifetime ambition – her dream of a musical career. A Star is Born Mariah Carey rose to superstardom on the strength of her stunning five-octave voice; an elastic talent who moved easily from glossy ballads to hip-hop-inspired dance-pop, she earned frequent comparison to rivals Whitney Houston and Celine Dion, but did them both one better by composing all of her own material.

Carey moved to New York City at the age of 17 — just one day after graduating high school — to pursue a music career; there she befriended keyboardist Ben Margulies, with whom she began writing songs. Her big break came as a backing vocalist on a studio session with dance-pop singer Brenda K. Starr, who handed Carey’s demo tape to Columbia Records head Tommy Mottola at a party. This occurred just ten months after graduating from high school and she was then a coat checker/waitress in Manhattan.

According to legend, Mottola listened to the tape in his limo while driving home that same evening, and was so immediately struck by Carey’s talent that he doubled back to the party to track her down. After signing to Columbia, Carey entered the studio to begin work on her 1990 self-titled debut LP; the heavily promoted album was a chart-topping smash, launching no less than four number one singles: “Vision of Love,” “Love Takes Time,” “Someday,” and “I Don’t Wanna Cry. ” Her overnight success earned Grammy awards as Best New Artist and Best Female Vocalist (IMDb.

com), and expectations were high for Carey’s follow-up, 1991’s Emotions. The album did not disappoint, as the title track reached number one — a record fifth consecutive chart-topper — while both “Can’t Let Go” and “Make It Happen” landed in the Top Five. Carey’s next release was 1992’s MTV Unplugged EP under Sony, which generated a number one cover of the Jackson 5’s “I’ll Be There. ” This album sold two million copies. Featured on the track was backup singer Trey Lorenz, whose appearance immediately helped him land a recording contract of his own. A Period of Success and Surprises

In June 1993, Carey wed Mottola — some two decades her senior — in a headline-grabbing ceremony; months later she released her third full-length effort, Music Box. This was released to strong sales, making it her first Number One album since her debut and is considered her best-selling record to date. Two more singles, “Dreamlover” and “Hero,” reached the top spot on the charts. Carey’s first tour followed and was widely panned by critics; undaunted, she resurfaced in 1994 with a holiday release titled Merry Christmas, scoring a seasonal smash with “All I Want for Christmas Is You.

” 1995’s Daydream reflected a new artistic maturity; the first single, “Fantasy,” debuted at number one, making Carey the first female artist and just the second performer ever to accomplish the feat. The follow-up, “One Sweet Day” — a collaboration with Boyz II Men — repeated the trick, and remained lodged at the top of the charts for a record 16 weeks (IMDb. com). After separating from Mottola, Carey returned in 1997 with Butterfly, another staggering success and her most hip-hop-flavored recording to date.

#1’s — a collection featuring her 13 previous chart-topping singles as well as “The Prince of Egypt (When You Believe),” a duet with Whitney Houston effectively pairing the two most successful female recording artists in pop history — followed late the next year. With “Heartbreaker,” the first single from her 1999 album Rainbow, Carey became the first artist to top the charts in each year of the 1990s; the record also pushed her ahead of the Beatles as the artist with the most cumulative weeks spent atop the Hot 100 singles chart (IMDb.

com). Breaking Down However, the early 2000s weren’t as kind to Carey. After signing an 80-million-dollar deal in 2001 with Virgin — the biggest record contract ever — she experienced a very public personal and professional meltdown that included rambling; suicidal messages on her website; an appearance on TRL where, clad only in a T-shirt, she handed out Popsicles to the audience; and last but not least, the poorly received movie Glitter and its attendant soundtrack (which was also her Virgin Records debut).

Both the film and the album did poorly critically as well as commercially, with Glitter making just under four million dollars in its total U. S. gross and the soundtrack struggling to make gold sales (Johnson, 2001). Following these setbacks, Virgin and Carey parted ways early in 2002, with the label paying her 28 million dollars. That spring, she found a new home with Island/Def Jam, where she set up her own label, MonarC Music. In December, she released her ninth album, Charmbracelet, which failed to become a success. The Emancipation of Mimi

After more than a decade of hits that include the staggering success of 15 #1 singles, Carey released her most revealing album to date, The Emancipation of Mimi, in April of 2005. Entirely written and co-produced by the gifted Carey, her tenth studio album is an intimate portrayal of both the challenges and successes that she experienced during her rise to unparalleled fame. Carey explains the inspiration behind her new album, “With this album, I am embracing my independence and celebrating the person that I have become.

Over the years, I have evolved into a better person and an even better artist. For the first time in my life, I am proud and unafraid to be who I really am, and that’s what the music of this album and its title reflect. By naming my album The Emancipation of Mimi andreferencing ‘Mimi’ a nickname only used by those closest to me, I am inviting my fans into my life. ” A brilliant artist who has co-written every song on each of her albums since 1990, Mariah Carey has consistently shown her willingness to express herself both as a remarkable vocalist and an acclaimed songwriter.

The Emancipation of Mimi offers more than a glimpse into Mariah’s world featuring tunes like the heartfelt “Circles” and “Fly Like a Bird,” with their positive messages of affirmation and hope. While being honest and vulnerable in expressing her emotions through songs like “I Wish You Knew” and “Joyride,” Mariah leaves no doubt that she is a woman who speaks her mind. The infectious, edgy “It’s Like That,” co-produced by Jermaine Dupri is the album’s first hit single and a definitive statement of where Mariah stands at this point in her life, and is her fastest climbing single in five years.

At Present On April 15, 2008, Mariah released her latest album, entitled “Touch My Body”. Already well acclaimed by the critics, the album serves as a culmination of the fact that Mariah Carey is indeed back and better than ever. She has put all of her past ordeals behind, as is now just looking to push through with her ever increasing success. With “Touch My Body” as a number one hit, she overtook Elvis Pressly as having the most number one hit singles of all time. Truly, this was a sign of good things to come for the very talented singer and song writer.

During the month of May, Mariah Carey married actor Nick Cannon in what was considered as one of the biggest shockers of the year. Cannon, who was more than a decade younger than Carey, is considered by many to be perhaps “the luckiest man”, with Mariah Carey estimated to worth tens of millions of dollars. Many doubt their marriage as a publicity stunt, but the couple has presented themselves to be well into their marriage. But only time will tell whether this marriage is built to last, or Cannon will be just another chapter in Mariah Carey’s roller coaster life.

Charitable Works Apart from her musical achievements, Mariah Carey’s depth of person stems from her love and support of children in need; evident through her continuous involvement in a host of charities dedicated to ensuring their happiness and well being. Mariah is devoted to such charities as The Make-A-Wish Foundation, The Fresh Air Fund, Save the Music, and The National Adoption Center to name a few. With an unwavering effort through appearances, concerts, and donations to these organizations, Mariah has raised millions of dollars.

Her generous involvement and on-going support of the Fresh Air Fund resulted in Camp Mariah, the fund’s first camp named in honor of an individual. Conclusion To conclude, Mariah Carey has indeed had a very colorful career since she broke into the music scene almost twenty years ago. She has proven time and time again that she is here to stay, and have weathered all the trials that have been thrown at her. With a voice that is unmatched and a song writing skill that is rare these days, Mariah has been able to reinvent herself in each single and keep her sound fresh for her fans.

Life and Career of Mariah Carey. (2016, Aug 12). Retrieved from https://studymoose.com/life-and-career-of-mariah-carey-essay 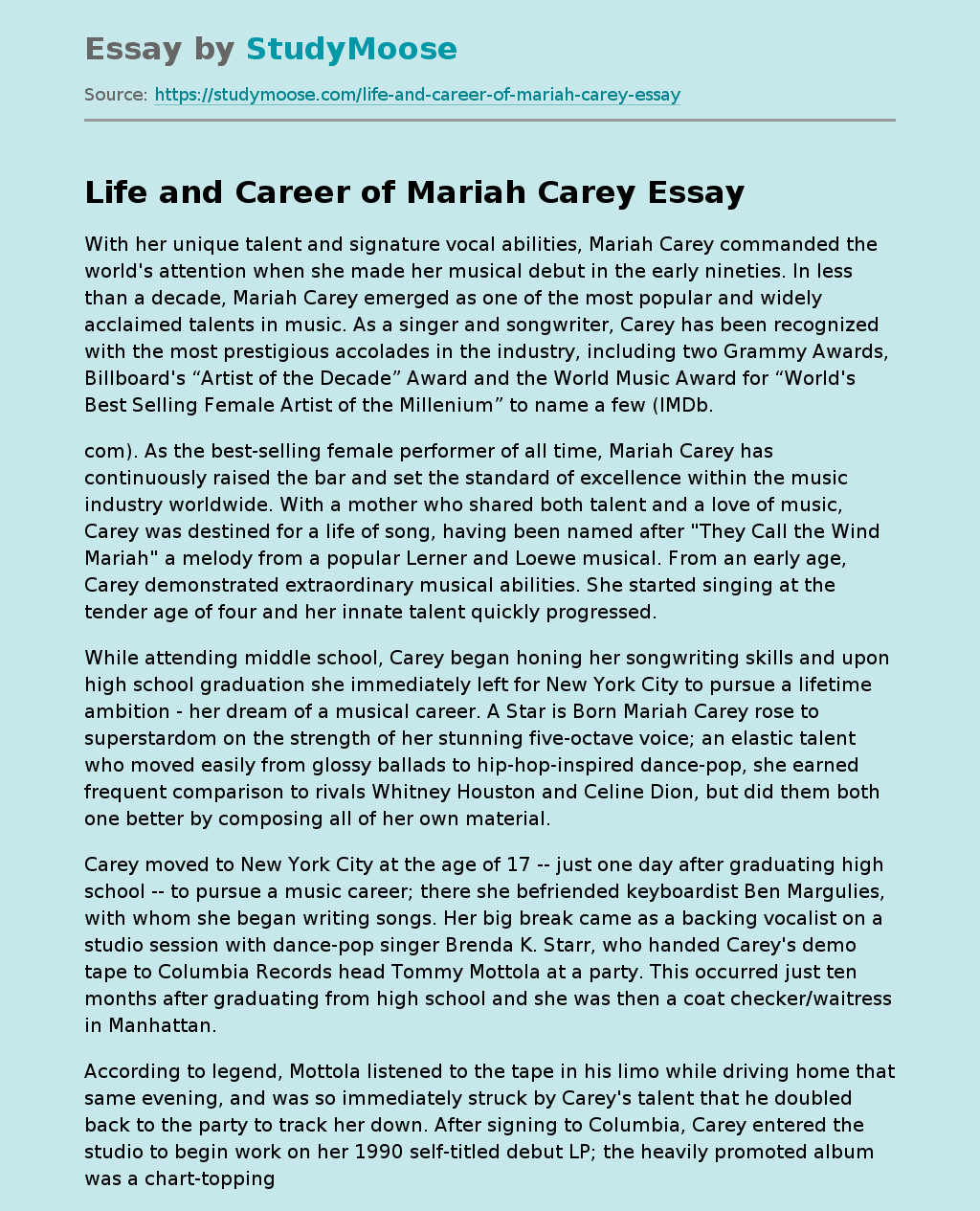