Muhammad Ali Jinnah’s success as a distinguished Indian politician, whom campaigned efficaciously for Pakistan’s independence as a nation, as well as became its first leader was a result of a combination of numerous social, economic and political factors. Well-regarded as Pakistan’s ‘Great Leader’ or also often referred to as ‘Quaid-I Azam’, Jinnah was one of the Significant individuals contribute(d) to change’ to a high extent, due to making a long-lasting impact on Pakistan’s history and the overall surrounding nations that were involved in Pakistan’s participations and connections.

Don't use plagiarized sources. Get your custom essay on
“ Muhammad Ali Jinnah’s success as a distinguished Indian politician whom campaigned efficaciously ”
Get custom paper
NEW! smart matching with writer

Jinnah’s social factors contributing to historical change have credited him in significantly transforming the fates of numerous Muslim individuals, whom live in the Indian subcontinent. Under his motto of Faith, Unity and Discipline’, Jinnah envisioned to achieve his values of social justice, equality and brotherhood that he visioned for Pakistan. As a consequence of his death, Jinnah’s successors were tasked with strengthening the nation of Pakistan, in which Jinnah had so purposely established.

In addition, Jinnah, was a strong believer and loyal devotee of the rule of law, being a constitutionalist. According to the A.D.C. of Quaid-i-Azam, Major Gul Hasan, Around 400 government servants assembled before the gates of Governor General House, for a protest, the staff asked for permission to scatter the protestors through lathi charge, but Quaid-i-Azam, told the staff that peaceful protest is their constitutional right’, which illustrates Jinnah’s integrable and complying nature. It is also evident from the fact that right from his Fourteen Points till consolidation of Pakistan, Jinnah was highly in favour of giving provincial autonomy to the provinces.

Further, Jinnah’s firm stance in believing that no nation could consolidate without education is apparent in his message to the All India Educational Conference’, stating, There is no doubt that the future of our state will, and must, greatly depend on the type of education, we give to our children. This highlights Jinnah’s positive ideology and hopefulness, regarding how the power of education empowers the potential of the future generation of students. Therefore, it was Jinnah’s social factors of justice, equality brotherhood in the means of law and education that highly impacted historical change. Jinnah’s economic factors, in stressing both the economic and financial development of his nation have further significantly contributed to historical change. Jinnah took a keen interest in numerous organisations, including, All India Federation of Muslim Chambers of Commerce and Industries, Muhammadi Shipments, Habib Bank, Printing Press, Orient Airways and Muslim Commercial Bank. This is shown through his statement on the eve of the opening ceremony of State Bank of Pakistan, in which he claimed, I shall watch with keenness the work of your research organization in evolving banking practices compatible with Islamic ideals of social and economic life’. Jinnah’s statement here points out his thoughts in asking, as well as aspiring for equal opportunity for all. Also, Jinnah’s belief in foreign policy was based on the amalgamation of tranquillity, cooperation and peace, in stating on the eve of the inauguration of Pakistan Broadcasting Service, Our object should be peace with in and peace without. We want to live peacefully and maintain cordial, friendly relations with our immediate neighbours and with the world at large’. Thus, Jinnah’s apparent economic factors, regarding numerous organisations dealing with the economic and financial stances of Pakistan, influenced his contribution to historical change. Jinnah’s political factors, were the most vital aspect of his contribution to change, since this is what drove him to his success as Pakistan’s great leader. Jinnah’s determination and innate aptitude allowed him to start out in the legal profession, and soon the young Jinnah rose to clear prominence in becoming Bombay’s most successful lawyer. After being recognized in the legal profession, in 1905, Jinnah entered politics formally from the platform of the Indian National Congress. In that same year, he travelled to England, as a member of a Congress delegation during the British elections to plead the source of Indian self-government. Shortly after, the budding politician served as Secretary to Dadabhai Noaroji, the honourable Indian National Congress President. At the Calcutta Congress session, Jinnah then made his first ever political speech in order to address his support of the resolution on the idea of self-government. Following three years, in January, 1910, Jinnah was elected to the newly-constituted Imperial Legislative Council. Jinnah was one of the most influential voices in the basis of Indian rights and freedom all through his four spanned decade parliamentary career. By also becoming India’s first to through the Council pilot a private member’s Bill, Jinnah shortly after became one group’s leader inside the legislature. Approximately three decades since Jinnah’s entry in politics in 1906, Jinnah fervently believed in and diligently worked for Hindu-Muslim harmony. Also, Jinnah was accountable for the lone pact ever signed between the two political organizations, consisting of the Congress and the All-India Muslim League, in representation of the two major communities in the subcontinent, known as the 1916 Congress-League Pact. This scheme embodied in this pact was to become the basis for the Montagu-Chemlsford Reforms, also known as the Act of 1919. The Luckhnow Pact, in retrospect, represented a breakthrough in the evolution of Indian politics. Firstly, it allowed Muslims the freedom to separate electorate, right to reserve seats in the legislatures and weightage in representation at the minority and Centre provinces. Secondly, it signified a credit tactic of the All-India Muslim League, as the Muslim’s representative organization, thus solidifying the trend towards Muslim individuality in the world of Indian politics. By 1917, Jinnah came to be documented among both Hindus and Muslims as one of India’s most noteworthy and prestigious political leaders because of his prior political contributions. Jinnah was not only highly noticeable in the Imperial Legislative Council and Congress, but also the President of the All-India Muslim League, as well as that of the Bombay Branch of the Home Rule League. More notably, due to his critical role in the Congress-League entente at Luckhnow, he was greeted as the ambassador, of Hindu-Muslim unity. Consequently, to Jinnah goes the credit for all these political achievements, resulting to his apparent contribution to historical change. Jinnah, thereby all throughout his life fought for the intrinsic rights of his people and took up the somewhat largely unconventional and misjudged cause of Pakistan. This enabled him to be the recipient of some of the most supreme tributes paid to any one in modern times, some of them even from those who held an utterly opposed social, economic and political viewpoint. To many individuals he is perceived as a heroic and applaudable figure, such as the West Bengal Governor in 1948, who thought of him as an outstanding figure of this century not only in India, but in the whole world’, as well as the Secretary General of the Arab League, who called him one of the greatest leaders in the Muslim world’. Jinnah’s passing resulted in the world losing one of the greatest statesmen and to many, Pakistan’s life-giver, guide and philosopher. In conclusion, Muhammad Ali Jinnah’s, political, social and economic actions caused significant change in history. Jinnah’s actions culminated in the ultimate of most responses, becoming the Father of Pakistan’, in being the nation’s true leader and evidently doing his people justice. 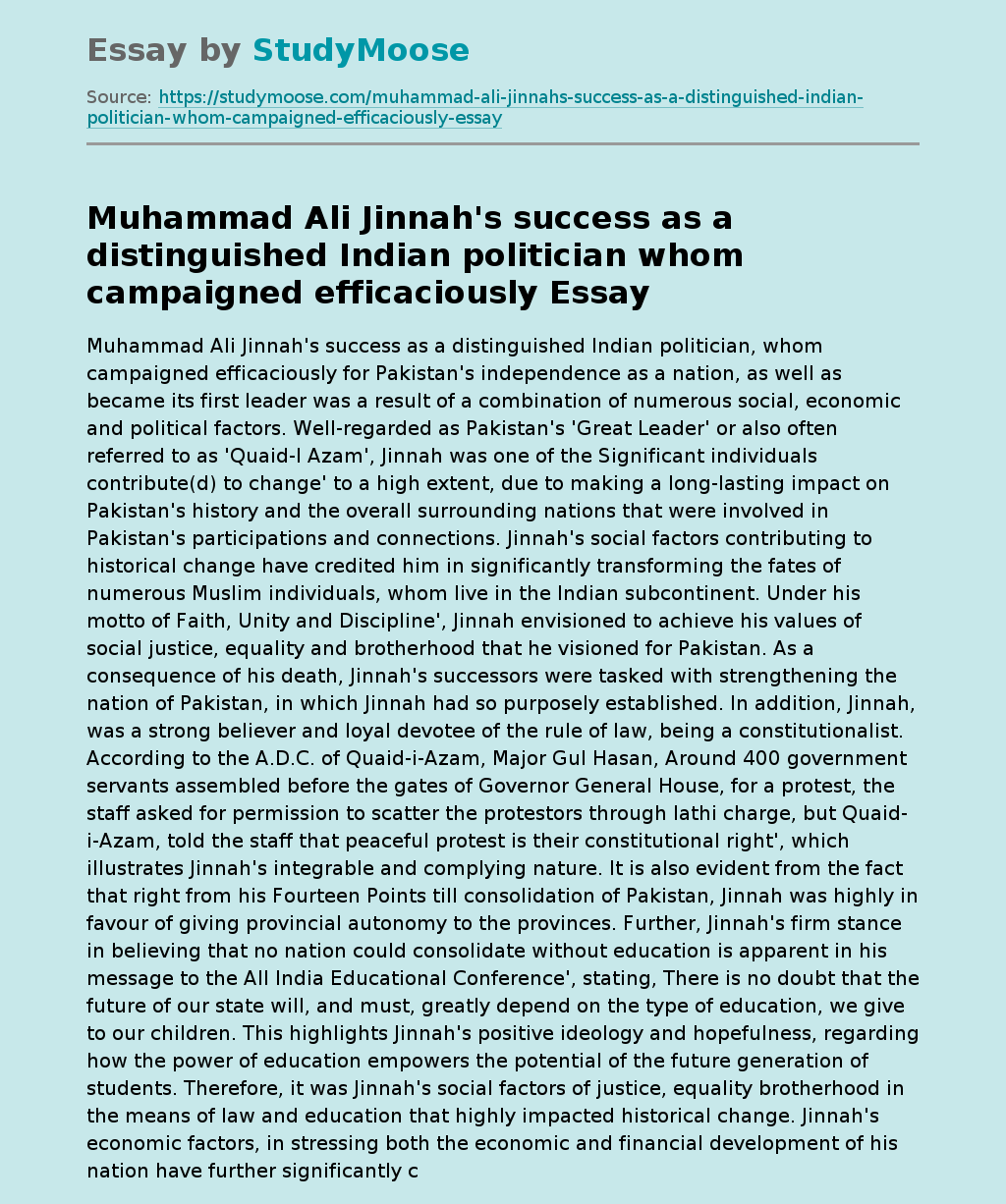