What Comic Devices are Used in "Ali G Indahouse" and How Are They Enhanced by the Music and Cinematography?

Many people have called the movie “Ali G Inda House” an extremely funny film, but what makes this movie so funny, and how does the use of music and the use of camera work enhance the jokes? This essay aims to examine the types of humour used, such as double entendres and self-revealing irony. I will also observe in detail how some jokes are affected by music and cinematography.

The movie starts with opening credits, which are slightly reminiscent of a Hollywood movie, with dramatic music and sudden cuts of a city.

Don't use plagiarized sources. Get your custom essay on
“ What Comic Devices are Used in “Ali G Indahouse” and How Are They Enhanced by the Music and Cinematography? ”
Get custom paper
NEW! smart matching with writer

The credits flash through and give a sense of a blockbuster movie. This sets the mood for the opening scene; you start to imagine a serious film with typical action scenes. It then cuts to a scene of a man hassling two women, when Ali G drives up in a convertible. The man turns around and speaks to Ali in Spanish, and Ali replies in French. This is self-revealing irony, a tactic employed greatly throughout the movie, which shows the stupidity of the character through their speech or actions.

The genre of music used in the opening credits (rap) and the use of establishing shots of Los Angeles gave the impression of a Hollywood action movie, with sudden cuts of the area and rap music setting the scene. However, within several minutes and after the first joke, the faï¿½ade of a serious movie is destroyed, revealing it as a comedy and spoof.

Also, after these first several scenes of the movie, it then becomes apparent that “Ali G Inda House” is just a satire based on the stereotypical black gangsters and the gang wars of the Los Angeles’ ghetto etc.

It’s shown in many obvious ways, such as: it’s set in the town of Staines, and has two gangs, called Eastside, and Westside; they own their own individual turf, which is separated by roundabouts; and instead of owning expensive Ferraris or other such cars, they own old and cheap Renaults etc. Due to the fact that Ali G himself is actually white, many people can relate to this movie because of the stereotypical group of children entitled “Chavs” or “Pikeys”. They are Caucasian, yet many act black, they try and talk how gangsters talk, they also attempt to act like them and they even imitate the same clothes, and still manage to believe they are cool.

By satirising stereotypes, it gives most people something to relate to, whether it is them having seen it for themselves on the street, or whether it is by watching TV. By then spoofing them and purposefully insulting them, it adds a sense of humour that many people find amusing. For example, in the movie, women are seen mostly as objects of sex. They are highly sexualised, and in some parts of the movie, Ali G comes out of his role and makes comments (post-modernism) on how he acted sentimental, just so he could appear to have a romantic side for the women.

Sexual humour is one of the most common jokes in the movie, and occurs regularly. When Ali G is being shot at by a group of armed men, the outline left on the wall from the bullets is the shape of Ali G, with an added large penis hanging down. Another example occurs straight afterwards, the women he saves get into his car and start giving him fellatio, whereupon he then wakes up, realising it was all a dream. Here the camera starts at a close range shot of his face, and oddly enough the quilts are shaking, as if someone really is pleasuring him. The camera then pans down, showing the dog.

Sacha Baron Cohen (Ali G) also mixes semantic field as a form of humour, for example, when he subverts the scouts. Ali is in the community centre, talking to a group of people about how someone has stayed off heroin for eight years, and the camera pans out, and it turns out to be a young boy, dressed as a scout. By using close up shots of Ali, it lulls you into believing that he is talking about grown men. By then panning out, the “punch line” hits you, and you realise that he was talking about a child who looks to be only eight. The effective use of the camera helps the delivery of the joke be more effective.

Ali then goes on to hand out an “advanced swearing” badge, similar to how the Scouts hand out badges for certain skills. Another example of the mixing of semantic fields is the integration of Staines and the Los Angeles ghetto.

Music is used to some extent in certain parts of the movie, such as, near the beginning, when they are about to get into their cars, the Knight Rider theme tune is played, obviously spoofing the TV series. For those who are too young to remember the series, or never watched it, the joke will have no effect on them, however, for those who do recall it, at the very least it brings a smile to their face. Another example of effective music use is when Ali enters the Houses of Parliament, and the politicians are all arguing. Dramatic music is played, orchestral epic music you expect to find in movies depicting large battles or tense moments. Ali G stands up, and begins to walk towards the centre of the room, obviously intending to deal with him. He approaches the opposing man, hushes him with his finger and a “shh”, and tells him to “relax ya batty.” The dramatic music made people expect something big to happen, and instead, something totally unexpected did. Not only does that cause humour because of what he did, but also what he said.

A comic device the scriptwriter uses often is the juxtaposition of things, for example, what Ali G says to the politician. “Relax ya batty” is something a chav would use on the streets or speaking to their friends. By using it in the place where people would expect them to speak in formal English, it is seen as funny and amusing. This happens often throughout the movie, such as when Ali G suggests they keep lessons relevant. It then cuts to a maths lesson, where the teacher talks about buying and selling drugs. School is a place where they teach you to steer away from drugs and other influences, and instead, it then becomes the place where you do learn about it.

In one scene where Ali G is attending a conference party with his girlfriend, the use of double entendres is used to great effect. Ali G and his girlfriend are upstairs having sex, and are making the ceiling and the chandelier shake from their movements. However, just before they started having intercourse, the Prime Minister and another man went upstairs to discuss some things. When they return to the main room where everyone else is, the shaking stops, and everyone looks at the two men oddly. The two start speaking, saying things such as “we came together”, and “he is a very big man.” By using the camera and showing us that it was really Ali G and his girlfriend having sex, it then gives meaning to the double entendre, making it humorous and comic.

So how effective is music and cinematography in enhancing humour? Unfortunately, in Ali G Inda House, music and cinematography which aims to enhance a certain joke is not used very often, and as such, examples of its effective use only appear several times throughout the whole movie. However, after watching and analysing this film, I can come to the conclusion, that when used properly both music and cinematography can be extremely effective. The right use of it can lull the watcher into a false sense of security, or it can help build tension or add to the atmosphere, drawing the audience into the movie. By doing so, the watchers will appreciate certain parts more or understand what’s the real point, whether it be serious, or a joke.

What Comic Devices are Used in "Ali G Indahouse" and How Are They Enhanced by the Music and Cinematography?. (2020, Jun 01). Retrieved from http://studymoose.com/comic-devices-used-ali-g-indahouse-enhanced-music-cinematography-new-essay 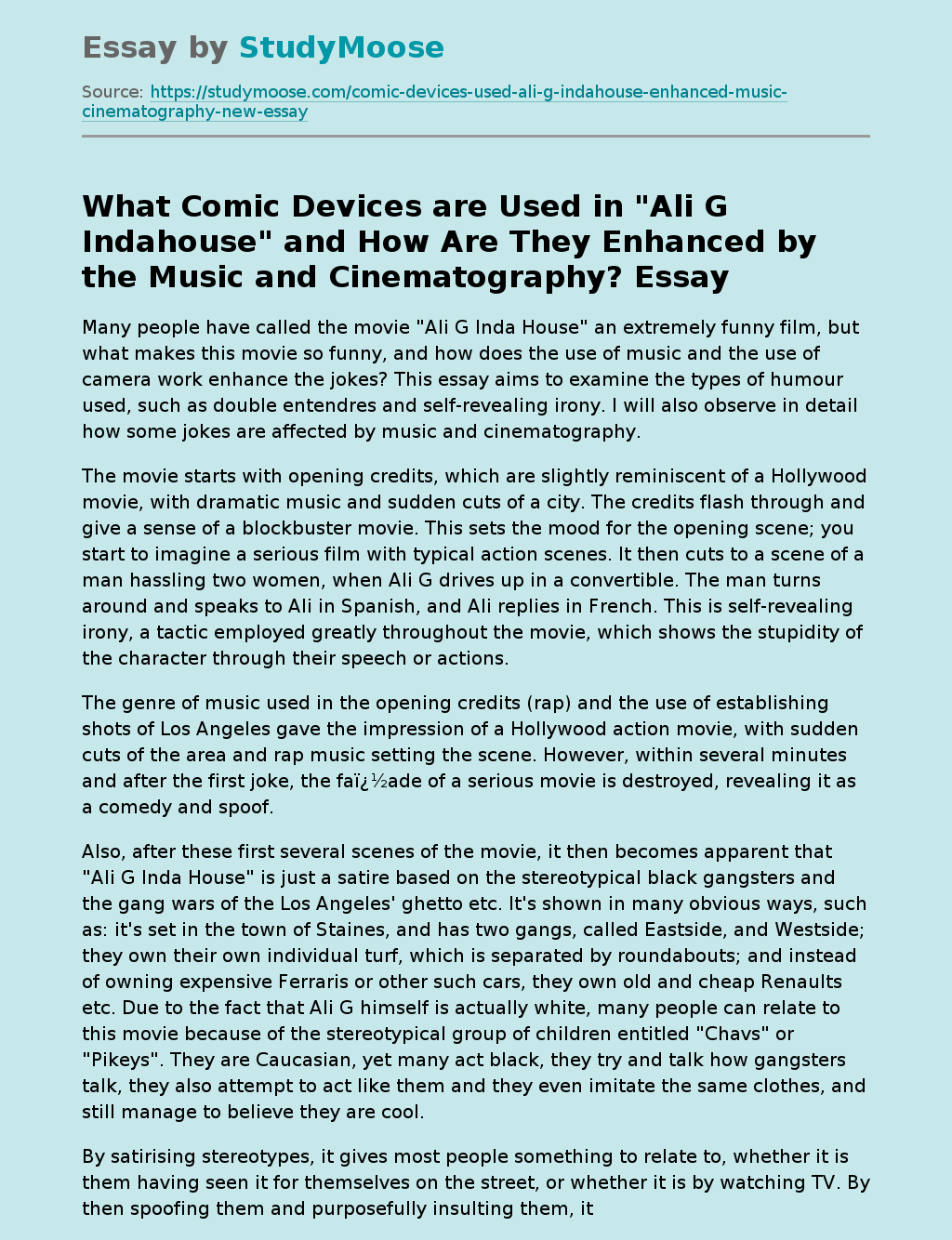