From age fifteen, he was made an integral part of Nusrat Fateh Ali Khan’s qawwali group which was famous throughout the world. He toured the U.K. with his uncle in 1985, and performed solo songs in addition to singing with the Qawwali group. At a concert in Birmingham on July 27, 1985, he performed the solo ghazal, Mukh Tera Sohneya Sharab Nalon Changa Ae. At a concert at the Harrow Leisure Centre in 1985, he performed the solo song, Gin Gin Taare Lang Gaiyaan Rattaan.

He sang lollywood playback in the 90s and debuted as a playback singer in Bollywood with the moviePaap (2004), featuring the hit song, Mann Ki Lagan. His recent works include Pakistani nationalistic songs such as Dharti Dharti and Hum Pakistan, and songs from Bollywood films. He has toured extensively and performed in Pakistan, India, United Kingdom and all around the world. In April 2012 Rahat toured in the UK, performing at Wembley Arena and the Manchester Arena, playing to a combined audience of over 20,000 people.

He judged the show, Chhote Ustaad 2 alongside Sonu Nigam. He was also one of the judges on the singing reality show Junoon – Kuchh Kar Dikhaane Ka, premièred on NDTV Imagine in 2008.[9]

Since becoming the head of the group, Rahat Nusrat Fateh Ali Khan has performed on a variety of recordings and has sung with Eddie Vedder at the Dead Man Walking Concert put on by Tim Robbins. He and his band continue to entrance world audiences with numerous shows around the globe. Rahat Nusrat Fateh Ali Khan’s self-titled release on American Recordings is his U.S. debut. Recorded in Santa Monica, CA, its four tracks are both emotionally charged and expertly performed. Producer Rick Rubin, of Red Hot Chilli Peppers and Beastie Boys fame, boosts Rahat’s already potent sounds by cranking up the low end and placing the tabla way up in the mix.

Though Rahat is excited to play with Western pop musicians and lay down tracks in state-of-the-art studios, he is ultimately most concerned with the art of qawwali and its mystically imbued message. As he states, “qawwali music is not only music, it is a message. It was created by Sufis, and when we compose and practice this music, it stays forever. Other music comes and goes, but qawwali never goes. Once you start listening, it goes in your soul, goes in your spirit, and you become more human. I feel that this music is my duty, to go and give the message of Sufism. My future is that one day I will fulfill the desire of Nusrat to give this message to the world.” ~ John Vallier, Rovi 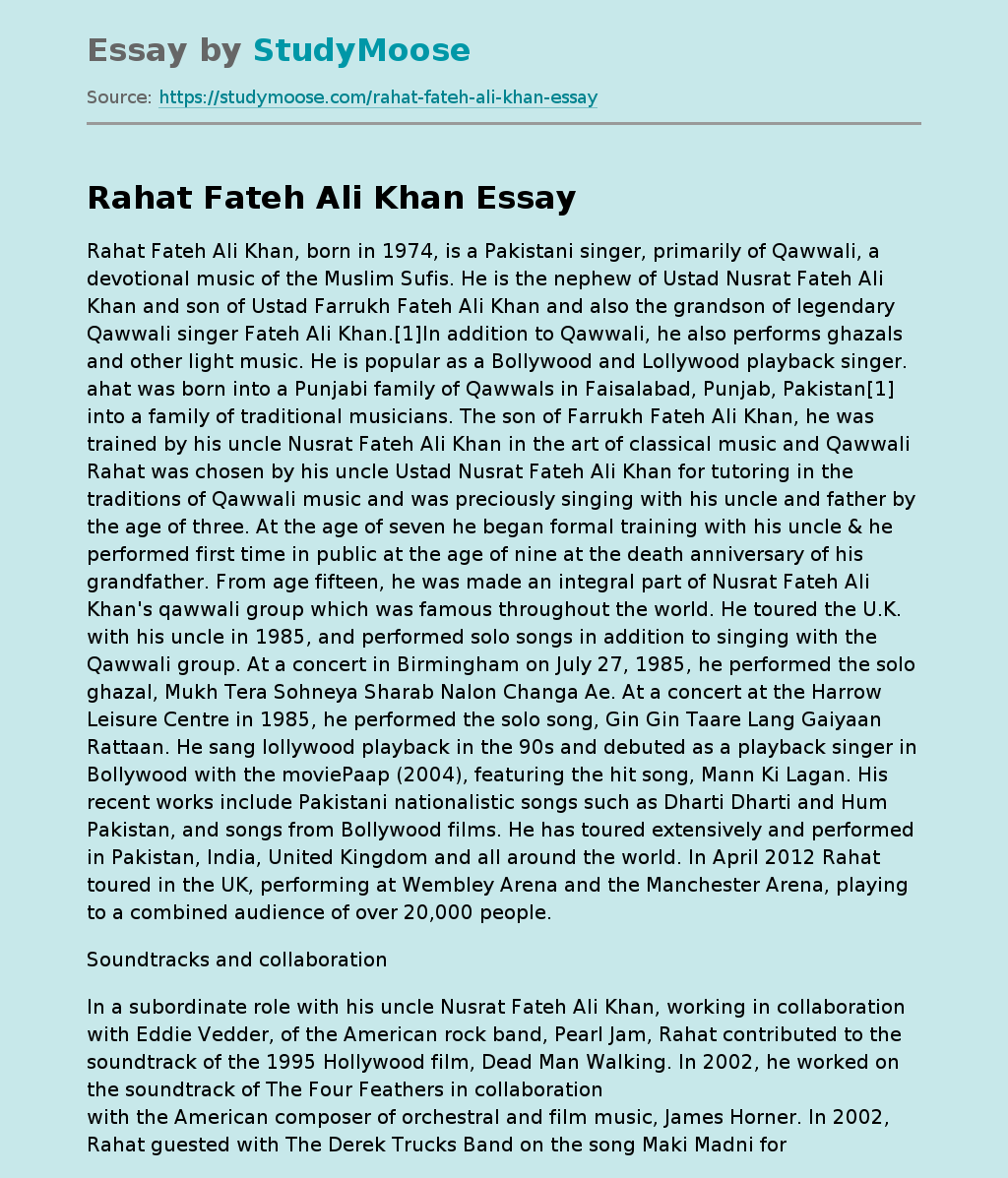