For this lyric assignment, I chose the song Sister Golden Hair (released 1975) by America in their album Hearts . America is an English-American Folk-Rock band, originally composed of members Gerry Beckley, Dewey Bunnell, and Dan Peek. The three members were barely past their teenage years when they became an overnight musical sensation in 1972. They reached a peak in popularity in the early to mid 1970s and early 1980s. Among the band’s best known songs are “A Horse with No Name”, “Sister Golden Hair” (both of which reached Number 1), “Ventura Highway”, and “Tin Man”.

The song Sister Golden Hair is interpreted by many people in a variety of different ways and meanings. In my opinion and from my research solidifying my interpretation, this song is about a guy that is wrestling with forbidden love.

In my interpretation of the lyrics, he is wrestling with forbidden love but not the love for a nun as many have thought. He has fallen in love with his half-sister whom he has been introduced to but didn’t know she existed prior to some broken family interaction along the path of his life, hence the surprise.

She also has shown that she felt something more than sibling love for him during family gatherings. He tries to fake being a brother but he is tortured by his lust for her and prefers to stay away from family contact for fear of being taken as a family member by her and lose his chance with her. Not ready for the alter would mean that marriage is not an option due to his blood ties to her, but that he seeks to live his life with her anyways as.

This song is about a letter he writes to her after years of painful waiting for her to catch up to him in years and reach adulthood, and to see if they can move on without one-another, metaphorically, Sunday but then Monday means several painful years of questionable, cautious, cat-like commitment to being there right when she’s ready. Originally, the lyrics said Meet me in VA would have meant giving him her virginity but as the lyric changed to air the meaning is that he has sent her a recording of a song he wrote for her and would she embrace his disincarnate company present in the “air” which is not a stretch of a term for a piece of music.

Will you meet me in the middle would mean that they both have buried their forbidden love for years and in his letter he is calling the game because the burden is too great and he may be considering suicide in his deep depression. Can’t you see it in my eyes means he has also sent her a photo with the letter and the recording (the CD cover?) the photo must show his emptiness but also his affinity for her, that she would fall in love even more so with the photo after not seeing one another for years.

This song is a musical masterpiece because like the outro it makes the musical statement that he would win her through his musical prowess: the intro for the song is a solo acoustic guitar bit which I think sounds awesome. While all this may seem to be a stretch, you might think I’m reading my own experience into these most beautiful and mysterious lyrics but just consider this… the author has stated that these lyrics are strictly poetic license and that mean these lyrics came from his in-depth subconscious mind.

The first time I heard this song I loved how it sounded and never bothered really listening to the lyrics. However, the more I listened to it and attempted to decipher its meaning, the more I realized how many metaphors it contains, and how much of a deeper meaning this song has. Guitarist Gerry Beckley wrote this song, and when asked if it was written to anyone, Beckley said: “No, this is all poetic license. With ‘Sister Golden Hair,’ as far as my folks were concerned, I was writing a song about my sister, and I couldn’t quite fathom it; they must not have listened to the lyrics.” (thanks, Brett – Edmonton, Canada) In my opinion, I believe this is a song with a very deep and hidden meaning that has been created like this on purpose because if people did really know its meaning it would never have been one of Americas top hits. 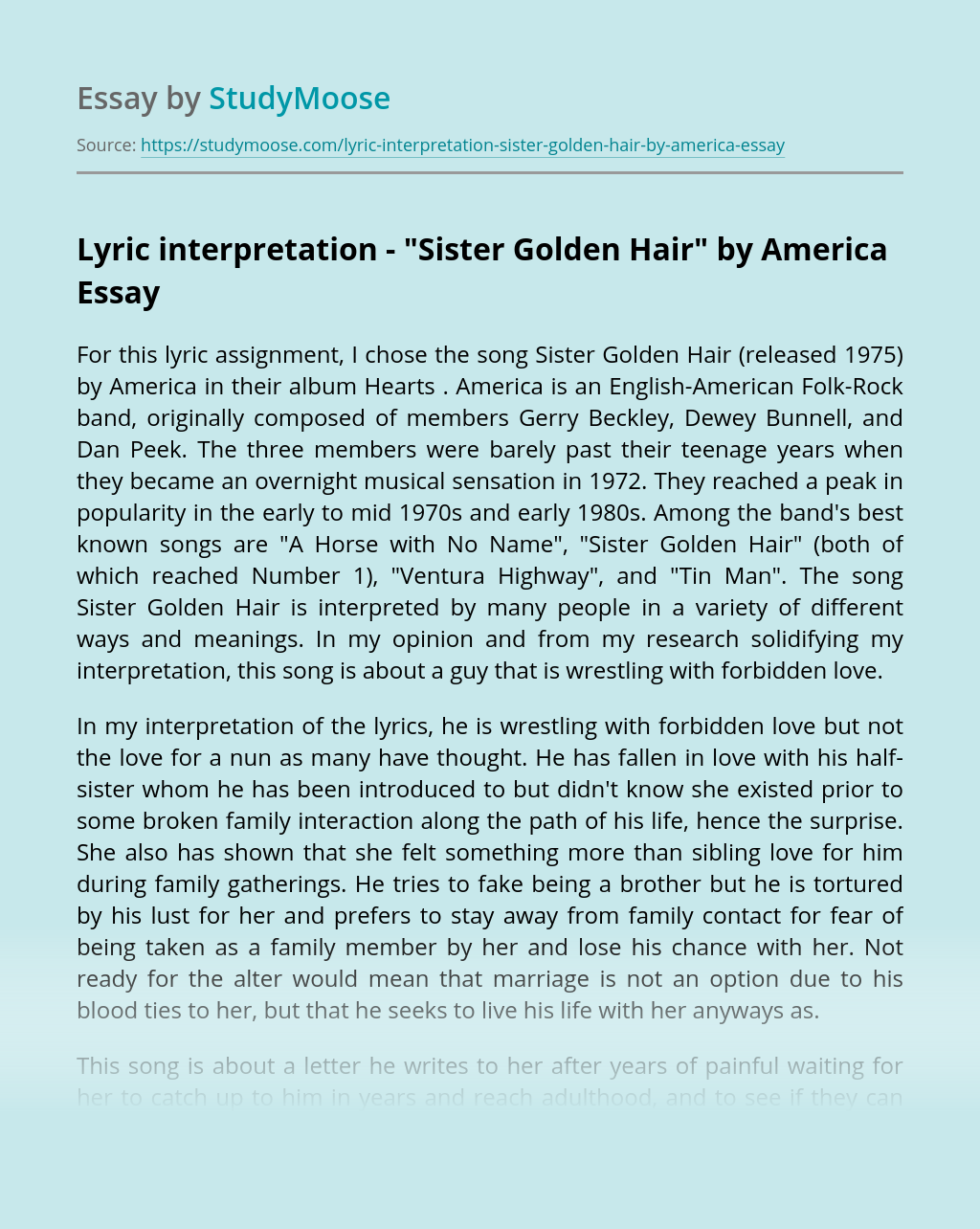