The Function of the Narrator in Blood Brothers

There are other instances of the characters showing that they can feel the narrator’s attendance. When Mickey and Eddie meet again, Mrs Lyons spots them sneaking off and can feel a cold shiver going down her spine, as she is afraid that they might find out the truth. The narrator is in the room with her and begins to speak, “Did you really feel that you’d become secure, And that the past was tightly locked away” The imagery of this speech is quite threatening with undertones of criminality in phrases such as “locked away, “debts to pay” and “reckoning day”.

Turn in your highest-quality paper
Get a qualified writer to help you with
“ The Function of the Narrator in Blood Brothers ”
Get high-quality paper
NEW! AI matching with writer

This reinforces the narrator’s malevolent nature and creates an atmosphere of foreboding to which Mrs Lyons reaction is one of fear. The narrator also speaks or shouts directly at other characters and although they can’t see him they often move to face him. This suggests that they can hear what he is saying. The narrator often mirrors the thoughts of the characters signifying that he may be acting as their subconscious.

One example of this is when Mrs Johnstone begins to feel regretful after giving away one of her sons. As she has sworn on the bible, she cannot turn to God and, as the narrator says, there “Ain’t no point in clutching.

At your rosary”. Here the narrator seems to be telling of Mrs Johnstone’s thoughts and the echo of her earlier conversation with Mrs Lyons in “And you can’t tell anyone” also seems to be doing this.

Mrs Johnstone knows that she cannot tell anyone that she has “sold a son” because Mrs Lyons has stated that if they ever find out the truth they will both “immediately die”. The narrator’s speech before Eddie heads to university is an important part of the play. It takes us from when they are fifteen through the three years till they are eighteen and describes the beauty of youth and the carefree attitude that they have as teenagers.

However, it also hints that the future will not bring the same happiness. The narrator says “Young, free and innocent, you haven’t got a care Apart from decidin’ on the clothes you’re gonna wear The street’s turned into Paradise, the radio’s singing dreams You’re innocent, immortal, you’re just fifteen. ” This sums up their love for life and the feelings of freedom that they have at that time. However, the narrator then follows with “And who’d dare tell the lambs in Spring, What fate the later seasons bring. Who’d tell the girl in the middle of the pair The price she’ll pay for just being there.

” This speech is used as an effective dramatic device to show the passing of time. As the characters are larking about in the background the narrator is hinting towards a worrying future and this contrast between the tones has the effect of casting a shadow over the latter part of the story and upsetting the comfortable atmosphere created earlier. More clues to the future of the story lie later in the speech when the narrator says, “How living could be anything other than a dream When you’re young, free and innocent and just eighteen” The Mickey, Linda and Eddie leave and the narrator continues.

“And only if the three of them could stay like that forever, And only if we could predict no changes in the weather, And only if we didn’t live in life, as well as dreams And only if we could stop and be forever, just eighteen. ” The repetition of “And only” shows that there is regret that it can’t stay like that but also that the change is inevitable. This is a turning point in the play and the language of the speech shows that the three young characters have reached their prime, and that from now on there can only be a downward slide towards the tragic ending that the narrator foretold at the beginning of the play.

In conclusion the narrator acts as a pivotal character in the play. He demonstrates some traits of a usual narrator such as bridging large gaps of time with his speech and beginning and concluding the play. However, he is also a far more important character than most narrators because he seems able to influence the characters, which is not seen in other plays. The audience also never know the identity of the narrator and his character does not develop like the other actors, which makes him more isolated and, although there is a dramatic relationship between the audience and the narrator, does not allow the audience to create empathy with him.

The Function of the Narrator in Blood Brothers. (2017, Sep 29). Retrieved from https://studymoose.com/the-function-of-the-narrator-in-blood-brothers-essay 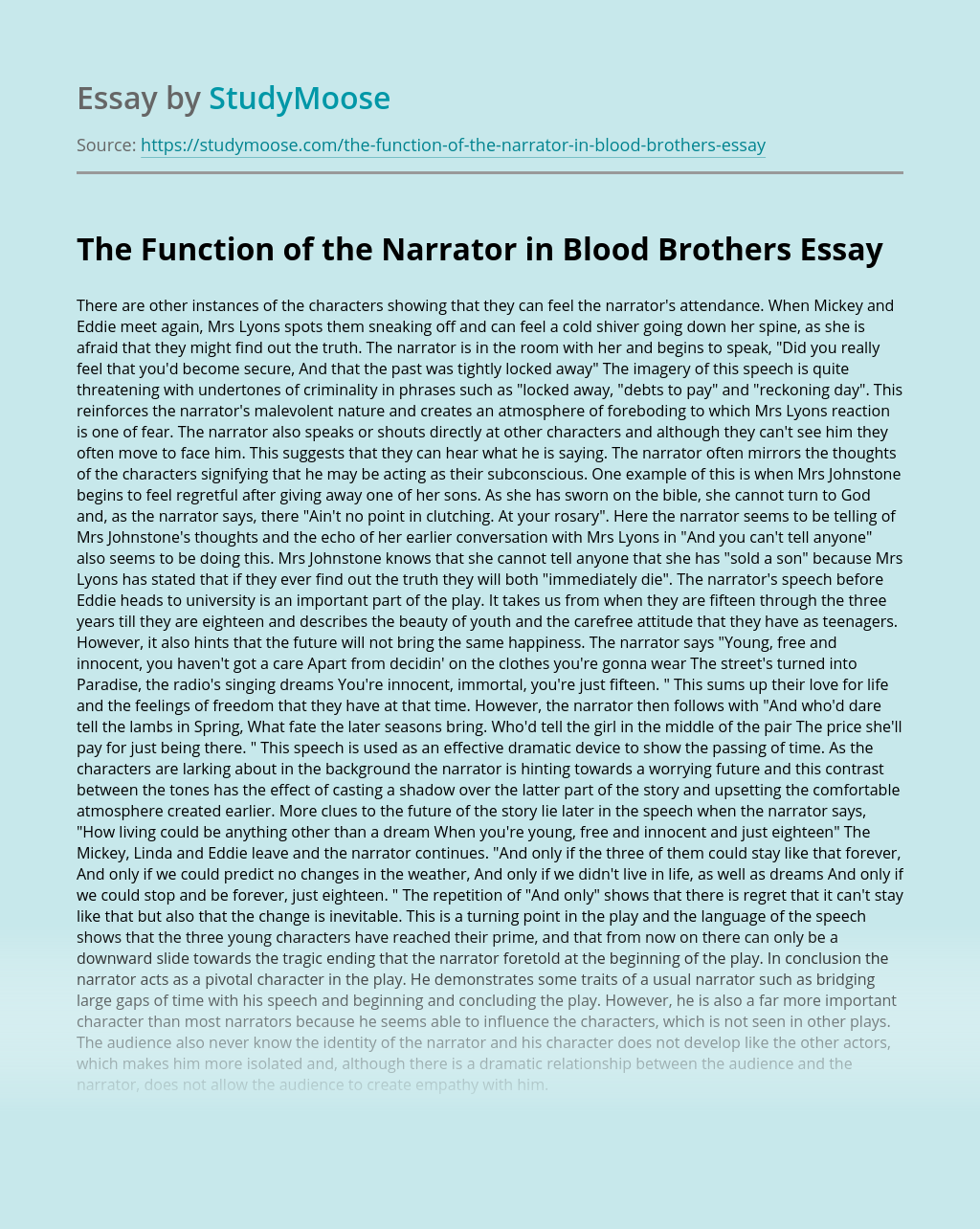 Turn in your highest-quality paper
Get a qualified writer to help you with
“ The Function of the Narrator in Blood Brothers ”
Get high-quality paper
Helping students since 2015
Stay Safe, Stay Original