Why is Hamlet able to kill in hot blood and not cold blood?

During my essay, I have tried to establish the following issues:  Why Hamlet is able to kill in hot blood and not cold blood.  How Hamlet can be ruthless in contrast to his delay in seeking revenge  Hamlet’s reaction with men of action (Laertes and Fortinbras) Hamlet’s treatment of Gertrude and Ophelia  How Hamlets madness was caused by revenge. The analysis I have formed is based on information from the following: Cambridge School Shakespeare – Hamlet  Zeffirelli Film – Hamlet (starring Mel Gibson)  Kenneth Brannagh film – Hamlet In Act 1, we see Hamlet as a depressive and grieving for his Father.

Don't use plagiarized sources. Get your custom essay on
“ Why is Hamlet able to kill in hot blood and not cold blood? ”
Get custom paper
NEW! smart matching with writer

He is also full of anger against his Mother because of her marrying her late husband’s brother within a couple of weeks of his Fathers death. I was under the conclusion that Hamlet could be suffering from Multiple Personality Disorder, and that Barnardo, Francisco, Marcellus, (the Sentries at the beginning of the play), and Horatio (fellow scholar and friend), could well be multiple personalities of Hamlet.

These five characters are the only characters in the play to see the ghost – the ghost appears whilst Hamlet is in Gertrude’s chamber (Act 3, Scene 4), but Gertrude is unable to see her dead husband “Alas, how is’t with you, that you do bend your eye on vacancy… “. This can be argued that Hamlet does have multiple personalities and the Ghost has been conjured up in Hamlet’s mind as a reason for revenge, but later on in the play, Horatio does have interaction with other characters, which totally dismisses this argument.

This, along with the fact that the ghost told the truth about his murder (as found out in the actors’ play, Act II, scene 2), implies that the ghost is real and not in Hamlet’s imagination.

It does not explain why the Ghost did not appear to Gertrude or why Gertrude could not see the Ghost. My opinion is that the Ghost felt disgust with his wife for betraying his memory so quickly. It could also be that Gertrude was unable to see him because she wasn’t ready or didn’t want to admit to herself that his death was foul play. Hamlet’s relationship with the women in the play changes throughout. In the Kenneth Brannagh film, he depicts Hamlet of already having intimate knowledge of Ophelia and them being in love, although the play doesn’t hint at this intimacy.

The play represents both the women to be subservient people, who obey without question. “No my good lord; but as you did command, I did repel his letters and denied His access to me”. (Opehlia, Act II Scene 1 line106-108) and (“I shall obey, my lord” (Opehlia, Act I, Scene 3, line 135) and with Gertrude taking the side of Claudius when Hamlet wants to return to Wittenberg. The play seems to represent Hamlet being in love with Ophelia, but because of her disloyalty to him (allowing Polonius and Claudius to eavesdrop on their first encounter in the play) and returning his letters infuriated him.

He could have been classing her as a whore when he says “Get thee to a nunnery” Act III Scene 1, Line 119 and could be as a result of Polonius speech to his daughter “Which are not sterling. Tender yourself more dearly… ” (Act I, Scene 3, Line 107). Even though Hamlet was not around in the scene, he was intelligent enough to realise that Polonius was vain, and that the only reason that a man like him wasn’t able to offer his daughter to ‘royalty’ must have been because of money, this explains why Hamlet called Polonius a “fishmonger” (Act II, Scene 2, Line 172).

Hamlet’s relationship with Gertrude was one based on distrust. If she could betray the King’s memory so quickly and, with his brother, how could Hamlet trust her? He felt that Gertrude was mocking his grieving “Why seems it so particular with thee? ” (Act I, Scene 2, Line 75), and that she never did grieve for his Father. When Hamlet goes to Gertrude’s chamber and informs her of foul play, Hamlet feels that she was part of the conspiracy to murder his father. It is only after seeing her shock that Hamlet realises that she had nothing to do with old Hamlets murder.

Towards the end of the play, Gertrude shows remorse to her son, by going against her husbands wishes “Gertrude, do not drink! ” “I will my lord, I pray you pardon me” (Act 5, Scene 2, Line 268 and 269). Could this have been suicide? Was Gertrude so ashamed at what she had done and attributed to, she saw this as the only way out? Hamlet was a very clever, intelligent individual who I feel was very intuitive to those around him. Hamlet pretends madness. This could be so he can catch Claudius unawares so he can kill him, or it could have been brought on by the Ghost commanding Hamlet to avenge his death (Hamlet was a scholar and not a soldier – and this went against all his religious beliefs).

Hamlet also seemed very paranoid. Was Hamlet’s paranoia tributary to Claudius’s paranoia? So they were both in a catch 22 situation, this setting the wheels in motion for Claudius to send Hamlet to England to his death? How did Hamlet know that he was being sent to his death? Was this because of the way Rosencrantz and Guildenstern behaved towards Hamlet. It is already known that Hamlet had seen through this modern day double act, (Act II scene 2 “Why, anything but to the purpose.

You were sent for – and there is a kind of confession in your looks which your modesties have not craft enough to colour. I know the good king and queen have sent for you… “). Hamlet was mocking Claudius in sending the letters to him informing him of his escape. Was this to put Claudius on edge, as a man running scared, is likely to make many mistakes? Hamlet’s view seems to change by the time he and Horatio are at the graveyard. All through the play, he has been talking himself out of murdering Claudius.

Was this because he knew it was wrong, or that if he killed a person when not in an act of crime, Hamlet would end up in Damnation and they would go to heaven? The king had died before he could confess his sins, so he lived in pergutory, wandering around the earth in torment. (Act 1, Scene 5, Lines 9 – 23). This is probably why Hamlet didn’t kill Claudius whilst at prayer, because Claudius had confessed his sins and would therefore go to heaven.

It is said that Hamlet could kill in Hot Blood but not in Cold. I find this contradictive, as Hamlet had no conscience about sending Rosencrantz and Guildenstern to their deaths, even though Hamlet’s thoughts were that Rosencrantz and Guildenstern were “allowing evil”. (Act 5, Scene 2, Line 70) Also, in the stabbing of Polonius (who it could be said, Hamlet thought was Claudius) whilst he was behind the arras in Gertrude’s chambers. The stabbing of Polonius could have been done in Hamlets highly emotional state. He was after all trying to get through to his Mother’s conscience.

Though would Hamlet have gone on to kill his Mother, if he hadn’t heard Polonius behind the tapestry? Hamlet’s relationship with Laertes was one of tolerance. He thought that Laertes was like his father and used words unnecessarily. He mocked Laertes as his was grieving at Ophelia’s graveside, because Hamlet felt Laertes was being too theatrical.

At the end of the play, when Hamlet discovered that Laertes had been used by Claudius for his own end, felt an affinity with him (he too had lost his father) and by forgiving each other for each others deaths – they were freeing themselves to go to heaven. Young Fortinbras and Hamlet were similar in two ways. They were both named after their Fathers. Upon their Fathers death, their uncles succeeded the throne. This is where the similarities end. Fortinbras went on to be a soldier and Hamlet a scholar.

We know that Hamlet had a dislike for unnecessary fighting (Act 4, Scene 4) and felt repulsed by the attack on Poland for some worthless land. (Act 4, Scene 4) . It can be deemed that Hamlet felt an affinity with Fortenbras as in Act 5, Scene 2 Hamlet declares that Fortenbras should be King of Denmark. This could be construed as Hamlets way of apologising that his Father had taken away land from Fortenbras’s father and in giving it back to Fortenbras, Hamlet was exorcising the ghosts and the fact that he had killed. Allowing both Old Hamlet and Young Hamlet to go to heaven. Hamlet by Diane Carney.

Why is Hamlet able to kill in hot blood and not cold blood?. (2020, Jun 02). Retrieved from https://studymoose.com/hamlet-able-kill-hot-blood-not-cold-blood-2348-new-essay 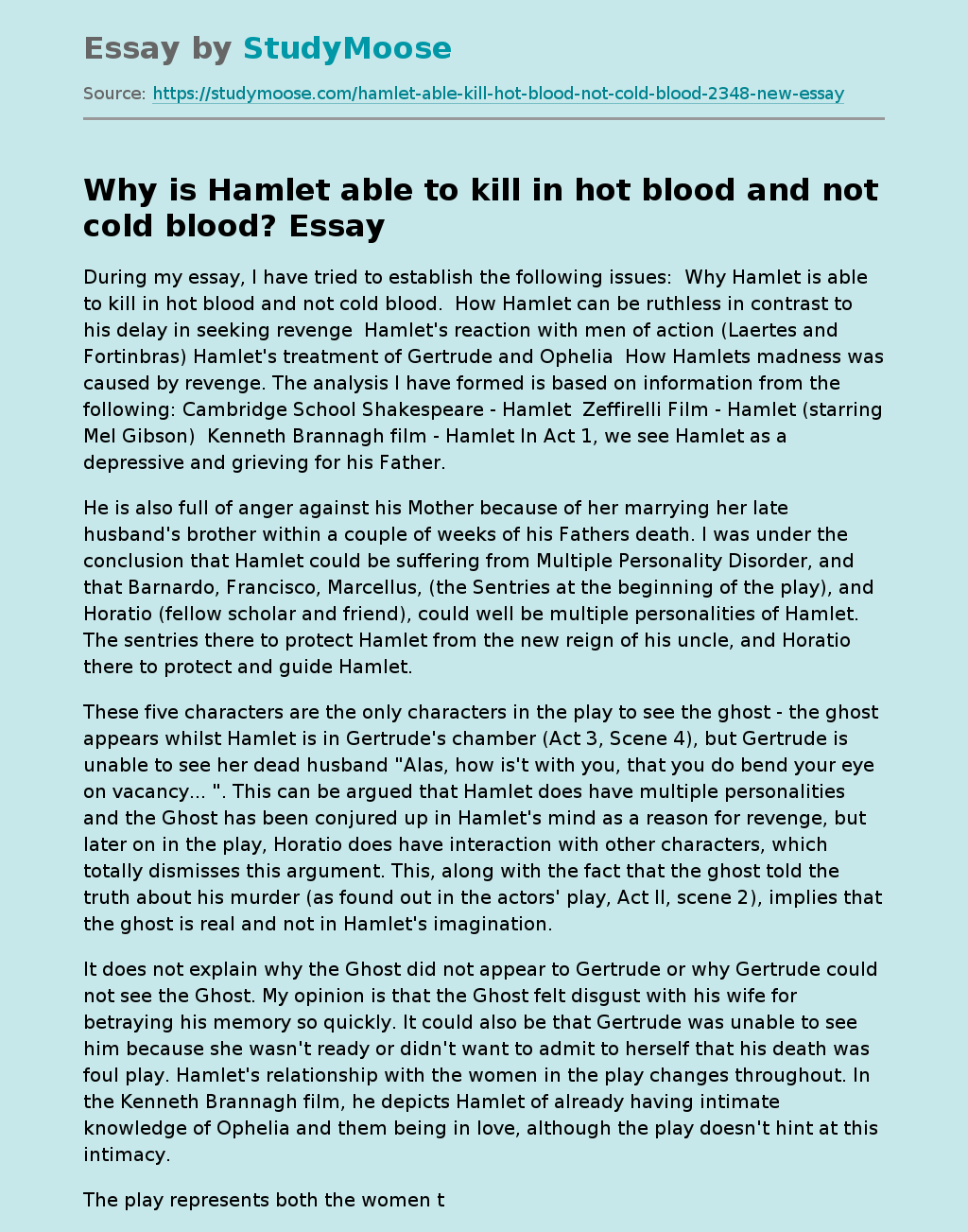