1) In Cold Blood is a non-fiction novel, but how is it more like journalism than an ordinary work of fiction?

Truman Capote wrote the book in brief sections, setting the scene and then putting a break in the narrative, the way the book is structured with several plotlines happening at the same time it keeps the reader on edge, giving it a classic crime-genre technique to always keep the reader in suspense. On top of this he pays close attention to the setting around the dialogue, producing powerful imagery for the reader.

Don't use plagiarized sources.
Get Your Custom Essay on In Cold Blood Essay Questions Just from $13,9/Page

The dialogue is factual, which reduces Capotes’ personal involvement, and with the descriptive, tense paragraphs, to heighten suspense. In the book we see two of the main characters, Dick and Perry, their interests and family background which we can see Capotes’ journalism through his reporting. In an interview for the New York Times in 1966, Capote said, “It seemed to me that journalism, reportage, could be forced to yield a serious new art form: the ‘nonfiction novel,’ as I thought of it … Journalism is the most underestimated, the least explored of literary mediums,”

2) In what ways does Capote reveal the nature of his research through the construction of the book?

In Cold Blood takes a unique view on a horrific story, and gives a non-biased opinion, by looking into the minds of the people involved.

In Capotes’ research he found that his background was surprisingly close to one of the man characters, Perry Smith, with both the author and the character both ridiculed as children. Though we can see that the author doesn’t forgive Perry, we can see Capotes’ sympathy. Capote knew how powerful suspense can be, and he used this to the full potential. With the clutter bodies being found at the house twice, with a quote that spans six pages. Also when Perry Smith makes his confession, 200 pages later, there is another quote that spans several pages, with the quote broken up only when he was interrupted by the questioner.

3) How does Capote colour the opening section of the book with a sense of impending murder and doom? What does this tell you about the book’s relationship to journalism?

With the opening chapter being named “the Last To See Them Alive” We can immediately see that murder is about to take place. Also when Capote starts describing the characters he keeps referring to the Clutter family’s day as their last. This gives us the impending idea that the reader is aware of what happens from the opening chapter. With the murder case being a true story that happened a long time ago, the author assumes that the reader will know the story before they’ve read the book. Thus Capote builds up tension and emphasises the upcoming deaths. With most current news stories being repeated many times, journalists try and find a new angle to keep the story fresh, we can see that Capote has tried to do this in his novel, to take a news story that people have heard before and try and adapt it to keep the reader interested. 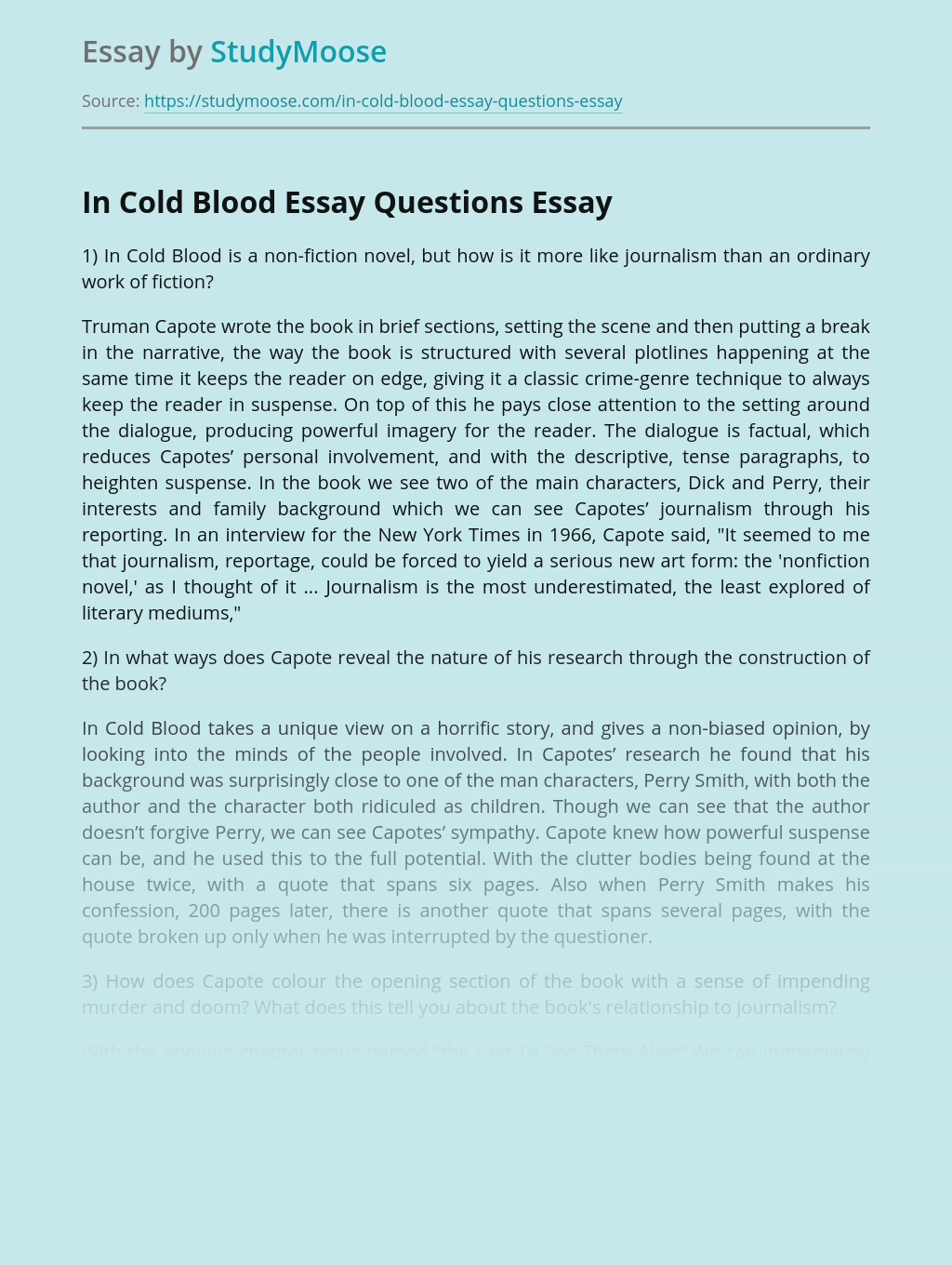 To Sir With Love by E.R Braithwaite - Exploring Themes - Racism

Q: Explore the theme of racism in the novel. Don't use plagiarized sources. Get Your Custom Essay on In Cold Blood Essay Questions Just from $13,9/Page Get custom paper A: To Sir With Love, is a testimony, written by E.R Braithwaite. A book which centers on a teacher, who takes his occupation as a “sheer...

In life, everyone has experiences which cause them to lose sight of who they truly are. In these situations one will face challenges and discover their darkest desires and deepest temptations. In Alice Munro’s short story Child’s Play, the conflict between Verna, Marlene and Charlene is portrayed through Munro’s use of literary devices which ultimately...

View sample
Who's Irish by Gish Jen All Elements of Fiction

“Who’s Irish” by Gish Jen is a short story about a Chinese grandmother living in America. The grandmother lives with her granddaughter Sophie, her daughter Natalie, and her unemployed, Irish son-in-law John. She describes Sophie as “wild (105)”, and blames her Irish side. She claims: “She is not like any Chinese girl I ever saw...

View sample
The road to Mecca

The statement “There is nothing sacred about a marriage that abuses the woman!” refers to social problems that harass women who are frequently the victims of violence and abuse. Elsa’s view of marriage is that it is a “human rights” approach to the problem of domestic affairs. These problems are more common in poor communities...