Look again at the extract on page 24 starting with “Do you want to come and play?” and ending with “now you say after me: ‘I will always defend my brother’.” With reference to the ways Russell presents the theme of social class in the extract and elsewhere in the novel in act one, show how far you agree that there is no escape from the effects of social class for the characters in the play.

Willy Russell successfully expresses the unfair treatment and inequality of social class by using the families in “Blood Brothers” as a microcosm of the 1980’s British working class.

Don't use plagiarized sources. Get your custom essay on
“ Blood Brothers: Act One on Social Class ”
Get custom paper
NEW! smart matching with writer

Russell uses a variety of linguistic techniques and dramatic devices such as: dramatic irony, Greek chorus, the foreshadowing of events and much more to establish social conflict. A very radical method used in “Blood Brothers” is the use of a narrator who distinguishes the juxtapositions of scenes helping us to identify mirroring and parallels in the play, allowing the audience to diagnose the immorality of social classes.

The narrator is also very vital in this play as he enables the audience to be involved which therefore allows the audience to judge the series of events in this play with social class and how money can buy power. “Blood Brothers” has a collection of themes which follow along the terms on injustice and prejudice, themes such as, “Fate Vs. Free Will, Friendship, Tragedy/Comedy, Social Injustice, Family Relations And Social Class. “

Much like social class, this play has a cyclical structure.

This highlights the inevitability of social class. Russell expresses that your social class and your placement in society is preordained, for example when Mickey questions Edward, “In the what” referring to the dictionary. This provides us with a simple display of how Mickey’s upbringing and social division marginalises him from certain aspects of middle upper class and other features. What is shocking but not surprising is that Mickey does not know what a dictionary is; this is also because we have a prejudice state of mind. Mrs.Johnstone is not well educated or wealthy, so unfortunately this passes onto Mickey giving us the same impression of him. We as an audience automatically categorise Mickey as “trouble”, even the Policeman defines Mickey as “ one of” clustering him into lower class, and the tragic thing about this is that there is no escape for Mickey or the rest of the Johnstone children.

On page 24 the use of profanity attracts Edward as such colloquialism is seen as “smashing” and “Fantastic”. When Edward “awed” towards Mickey it expressed the difference of their social classes and contrasted upbringings. In this case it appeared backwards, as the hierarchy of the society should make Mickey feel inferior to Edward but due to their ages this is absent. There is an innate honesty about children, but there is also a mind free of division.

The older we get the more we close off from society and others, we seem to visualise ‘our kind’ and follow such people whom we find interests in common and equal intelligence. However in children they believe is no reason to outcast someone unless they have done something bad to them. As Mickey and Edward get older they soon find reasons such as social class to individuate each other but this cannot be helped as there is no escape from this. Their social class unfairly forces them to exclude those who are not their “own kind”.

The theme of social class is consistent throughout the play, Russell presents that there is a level of discomfort between those of different social class. This can be seen when Sammy labels Edward as a “friggin’ poshy”, this strong use of vindictive language against Edward is not entirely Sammy’s true opinion but what he has been raised to think due to social class. It is not Mrs.Johnstone’s fault but possibly her attitude to those in higher classes than her own makes her children feel angry or annoyed as they see their mother being walked over and treated incorrectly.

Through this play it is presented that those of lower class cannot escape their “debts”, we can identify those of lower class by their use of liverpudian slang. Mickey refers to his mother as “me mam” whereas Edward refers to “mummy”, even though these words do not have a great difference we can still see that use of “me mam” is very slang like and is indicative of a poor vocabulary and suggests difficulty of self-expression.

Throughout this play there are many events when Mrs.Johnstone loses her voice. When talking to the policeman on page 42, Mrs.Johnstone loses her
voice suggesting that metaphorically in the ranking of social class her class has no voice in society and their judgement is unwelcome and this is also shown when she “nods”. This is almost dehumanising those of lower class and classifying them as inferior to those above them. With this is mind Mrs. Lyons is able to dominate Mrs.Johnstone whether it is money or her use of power. In act one Mrs. Lyons repeats the word “please” whilst using a cajoling tone forcing Mrs.Johnstone to capitulate to her wishes reinforces the fact that Mrs. Lyons could ‘buy’ anything she wanted in a sense shows her power, but the mere fact she can buy “a baby” presents her as Mephistopheles like character.

Mrs.Johnstone is emblematic of Faust; therefore we can allude to the fact that their “pack” is a Faustian pack. The use of biblical references such as “the bible” denotes to the day of reckoning and how “a debt is a debt”. In the scene where all the children are playing, they sing about how “the whole thing is just a game”. The extended metaphor of debt is an allusion to the Faustian pact once again and this continues to embed itself within the play as the song “easy terms” mirrors the characteristics of the “binding agreement”. The tension and suspense is heightened by the non-diegetic sound of a heart beat which is abruptly cut off. For money to signify power sets the lower classes within the debt abyss foreordaining that there is no escape.

In act one Willy Russell suggests a level of discomfort between classes as the policeman uses dialogue such as “Um…Err”. The policeman has no class in the play he is neither middle nor lower class but he more likely represents the attitude of society although he is not important as a character. In this scene the policeman’s jocular tone with Mr. Lyons contrasts with his contemptuous tone with Mrs.Johnstone. This is symbolic of how each class is treated differently and also how their only escape would be money.

Mr. Lyons gives the policeman whiskey when entering his house; this immediately makes the policeman owe Mr. Lyons. As you cannot accept something and do nothing in return, once you accept a gift or item essentially you belong to the giver. This is just a simple example of how the Lyons and their situation is a microcosm of the power imbalance between the working class and the middle class in society as a whole. Unfortunately for Mrs. Johnstone she cannot do the same as her debt is what prevents her level of social class and level of dignity and respect increasing meaning she hasn’t any escape from the effects of social class as she cannot escape her debt.

In “blood brothers” Russell suggests that women only have one of two priorities: He attempts to express that in the 1980’s a woman’s place is in a family. For example Mrs. Lyons does not work and she does not seem concerned about any other factor apart from a child and raising a family. Possibly alluding to the fact that she has nothing else to fill her void or her need for independence; however a child can fix that. Although if we look at Mrs.Johnstone’s situation is seems that her main focus is her income and trying to provide for her family. Russell is suggesting that in the 1980’s women had to chose between work and family. Even though Mrs.Johnstone is optimistic as she exclaims, “next week I’ll be earning”, the mantra of this sentence heightens our level of empathy and sympathy for her as we now that it will never be next week, as she has no escape from her debt or her working class life style. The different levels of social rankings determine which lifestyle they women can obtain in the play.

Russell equates class with destiny, as Mrs.Johnstone’s low expectation for her children influences the fate of her children. The scene where she sings about how “He wouldn’t get into fights, he’d leave matches alone” is one of the first signs of how Russell presents the effects of social classing. The next sign is when Mickey looks up to Sammy as a role model, this is a poor role model but to Mickey and his working class family Sammy is a prime product of his class.

The signs forebode the destiny of Mickey’s life, as from his mediocre education to his unemployment and the tragic murder of Edward it exploits that it was inevitable. In fact Mickey laments that he “could have been” referencing to his brother Edward, his sense of grief and dissatisfaction later in his life results in his revenge against Edward. Mickey was never given as a break from the effects of social difference therefore he continued the path he was destined as there was simply no escape for him.

Overall Russell successfully presents the effects of social conflict through the effective use of a narrator and his use of foreboding not to mention his use of dramatic irony. Russell has a true concept of what it was like in the 1980’s working class, he expresses the heart wrenching difficulties for those of different classes and how power can be used as a weapon. 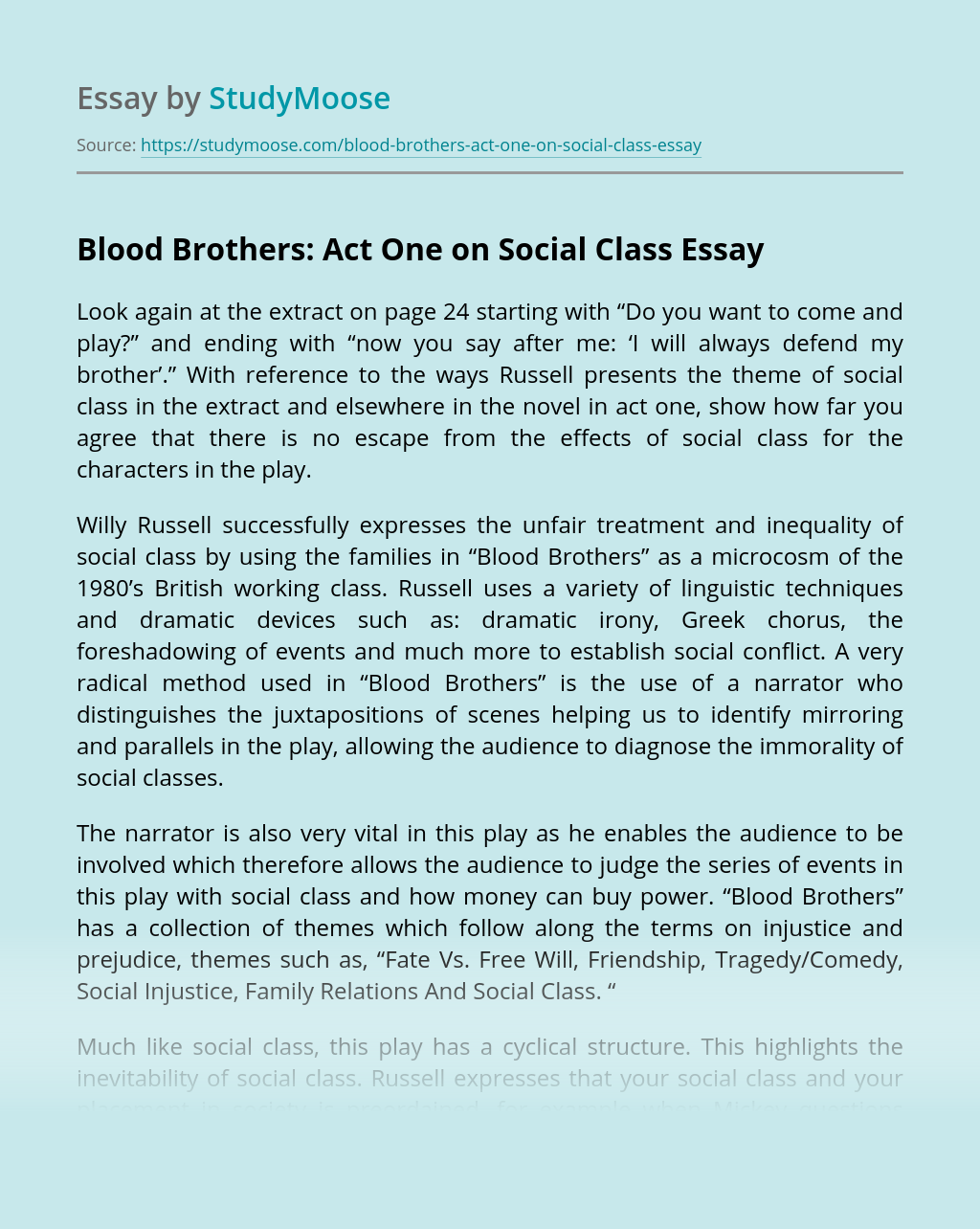