Hawthorne's use of the narrator in Young Goodman Brown

In Nathaniel Hawthorne’s “Young Goodman Brown,” the story is told through the eyes of a limited omniscient third-person narrator. This style is very accommodating to the story because it allows the author perfect opportunities to express his points. The narrator can both describe what Goodman Brown is doing, and also evaluate and comment on the characters actions. This is a tool of the author to use the narrator to express his own personal beliefs on mankind. The narrator possesses the capability of reading the thoughts and feelings of the protagonist, the young Puritan husband, Goodman Brown, only among all the characters.

Don't use plagiarized sources. Get your custom essay on
“ Hawthorne’s use of the narrator in Young Goodman Brown ”
Get custom paper
NEW! smart matching with writer

As Brown turns the corner at the meeting house, he thinks:

” ‘Poor little Faith!’ thought he, for his heart smote him. ‘What a wretch am I, to leave her on such an errand! She talks of dreams, too. Methought, as she spoke, there was trouble in her face, as if a dream had warned her what work is to be done tonight.

But, no, no! ‘twould kill her to think it. Well; she’s a blessed angel on earth; and after this one night, I’ll cling to her skirts and follow her to Heaven.

This ability of the narrator is why the story has a limited point of view, since it does not apply to other characters in the story.

The narrator is an intrusive one who evaluates and comments on the actions and motives of the characters. When Goodman resolves to make this the last time that he ever does such a thing, the narrator evaluates his resolution:

” ‘Well; she’s a blessed angel on earth; and after this one night, I’ll cling to her skirts and follow her to Heaven.’

With this excellent resolve for the future, Goodman Brown felt himself justified in making more haste on his present evil purpose.”

“The road grew wilder and drearier, and more faintly traced, and vanished at length, leaving him in the heart of the dark wilderness, still rushing onward, with the instinct that guides mortal man to evil.”

“On he flew, among the black pines, brandishing his staff with frenzied gestures, now giving vent to an inspiration of horrid blasphemy, and now shouting forth such laughter, as set all the echoes of the forest laughing like demons around him. The fiend in his own shape is less hideous, than when he rages in the breast of man.”

Hawthorne continues to use the narrator to talk down on mankind. He cites numerous references of mankind associating with evil and committing sin. Another such comment appears after Goodman has entered the site of the coven:

“Another verse of the hymn arose, a slow and mournful strain, such as the pious love, but joined to words which expressed all that our nature can conceive of sin, and darkly hinted at far more. Unfathomable to mere mortals is the lore of fiends.”

Perhaps Hawthorne’s strongest comment comes while the devil speaks from the altar-rock:

“‘Lo! there ye stand, my children,’ said the figure, in a deep and solemn tone, almost sad, with its despairing awfulness, as if his once angelic nature could yet mourn for our miserable race.”

Everything that is happening is perceived and interpreted for the reader by the protagonist, until the end of the tale approaches and the narrator becomes more intrusive:

“Had Goodman Brown fallen asleep in the forest, and only dreamed a wild dream of a witch-meeting?

Be it so, if you will. But, alas! it was a dream of evil omen for young Goodman Brown. A stern, a sad, a darkly meditative, a distrustful, if not a desperate man, did he become. . . . And when he had lived long, and was borne to his grave, a hoary corpse, followed by Faith, an aged woman, and children and grandchildren, a goodly procession, besides neighbors, not a few, they carved no hopeful verse upon his tombstone; for his dying hour was gloom.”

Hawthorne's use of the narrator in Young Goodman Brown. (2016, Jun 21). Retrieved from https://studymoose.com/hawthornes-use-of-the-narrator-in-young-goodman-brown-essay 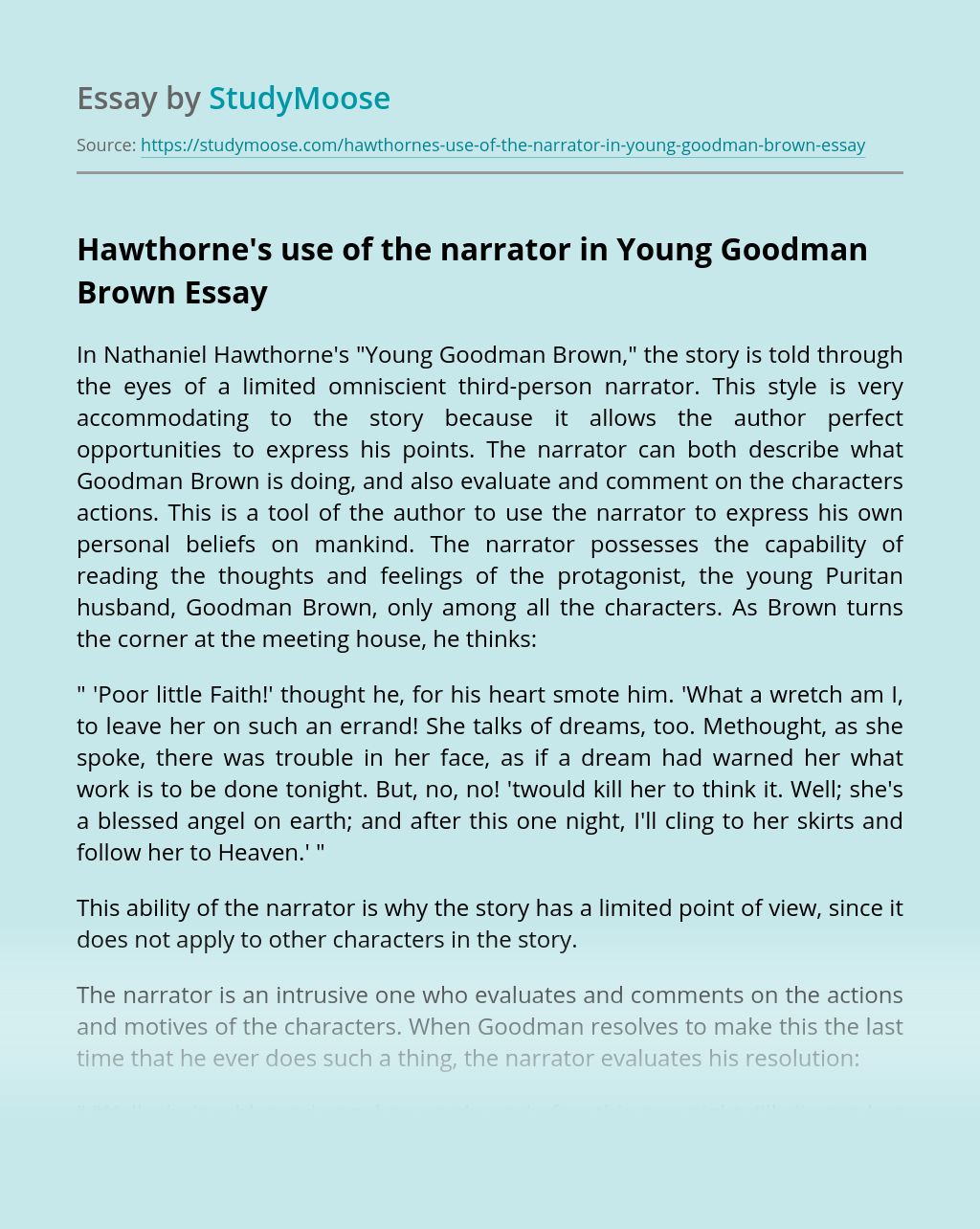