There are times when religion and innocence are questioned. Some people may argue that heritage can be a deciding factor in how religion can play a major role in how we view one another. The story Young Goodman Brown was the outcome of Hawthorne’s experience through his young adulthood, which was heavily impacted by the historical background of his family.

Nathaniel Hawthorne was born in 1804 in Salem, Massachusetts, to a family of Puritan colonists. Hawthorne’s paternal distant grandfather, John Hathorne, whom was a judge in the Salem Witch Trials, troubled Nathaniel so much, that he added the W to his last name to separate himself from the family.

1 Some readers could argue after reading this story, knowing the history of the Salem Witch Trials, and knowing things about Nathaniel Hawthorne, he showed the hypocrisy of the Puritan faith through the events that happened throughout the story.

One example of how Hawthorne’s heritage, specifically the background of the “judge,” played a role in the story through events that occurred, was at the beginning of the story when Brown, the main character, met with the traveler, also known as the “devil,” and discovered that the devil had possibly been affiliated with his family.

2 Brown stated in the story that he was “surprised that his family had never spoken of this, because if rumor had made its way to the town that the family was affiliated with the devil, they would have cast them from New England,” just as the individuals in the Salem Witch Trials were hanged, because they were believed to be affiliated with the devil, and using the Devil’s Magic.

Hawthorne used his experience with the Puritan background in the story, with the description of the woods as being a dark place, portraying that the “woods” is where the devil resided, and that the “woods” is where evil deeds took place.3 Hawthorne also used the sounds of the creaking of trees, the howling of wild beasts, and the yell of Indians that Brown heard, as another way to show that evil resided in the woods.

The Puritans’ belief was that the devil was responsible for every evil deed that took place, whether it was through witchcraft, or through rituals thought to be satanic.5 An example of this was the ritual that the devil performed towards the end of the story to try and convert Brown and his wife from the Puritan belief.6 Another example of how Hawthorne’s heritage and the Puritan belief were portrayed in the story, was shown when Brown was describing his opinion of Goody Cloyse, and of his father.

He stated in the story that he was surprised that Goody was in the woods, especially at night. Brown made the statement, “A marvel, truly that Goody Cloyse should be so far in the wilderness at nightfall.” Brown had also made a comment earlier in the story about his father being honest and a good Christian by stating, “My father never went into the woods on such an errand, nor his father before him. We have been a race of honest men and good Christians since the days of the martyrs.”

Brown thought highly of both of his father and fellow acquaintance, Goody, and believed they were both strong in their faith. Whether or not all the events that took place throughout the story were a dream or reality for Brown, Hawthorne used the devil’s ritual to reveal that even the good Puritan townspeople that Brown thought were superior than he, are apt to commit sin. Hawthorne also showed that religion can play a role in how we view one another. 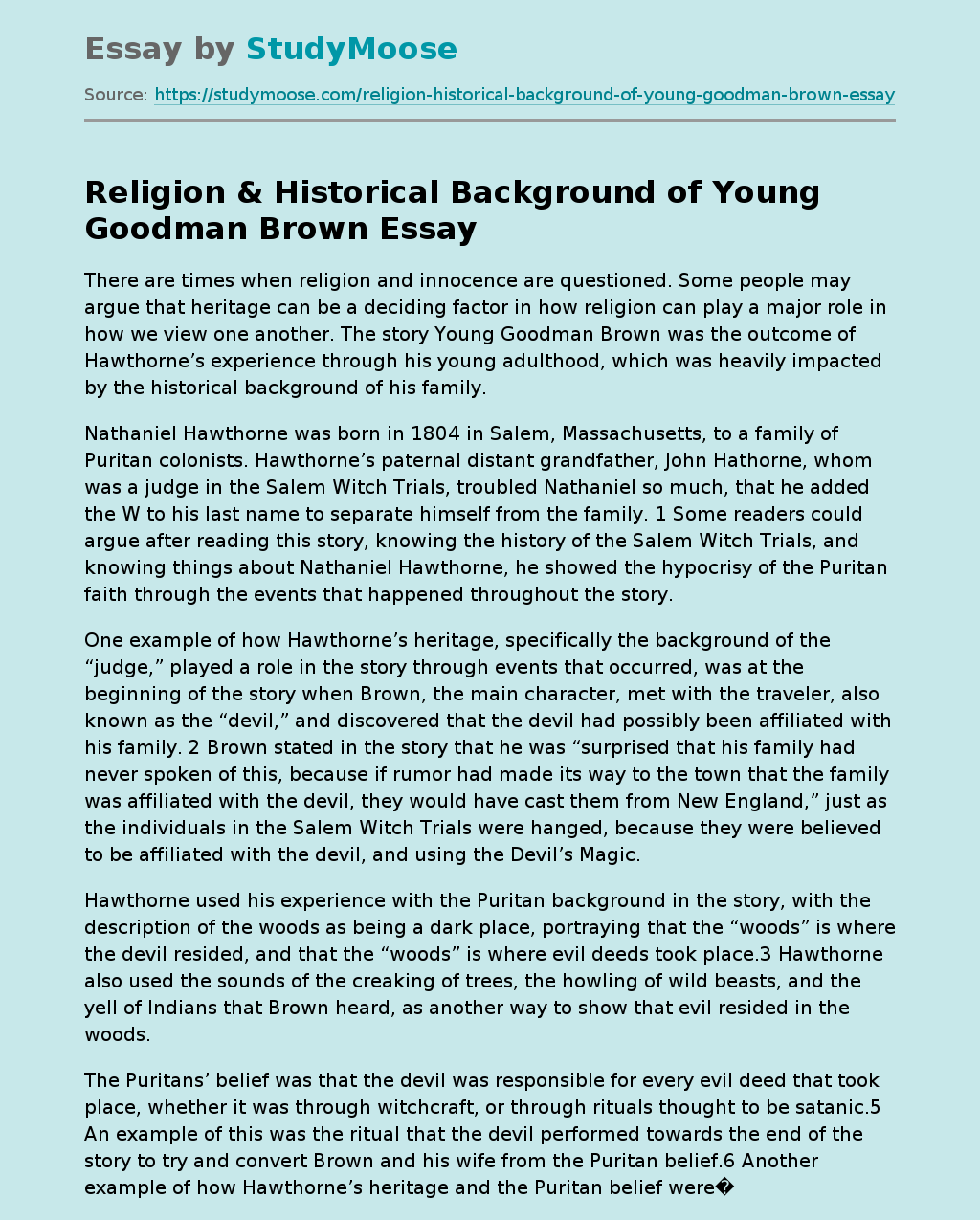