In the short stories, “The Story of an Hour” by Kate Chopin and “Young Goodman Brown” by Nathaniel Hawthorne, they reveal the different forms of the characters encounter with life before, during, and after each personal position within their lives. From Chopin’s perspective, she lies within the context of transition, fear, and isolation. Chopin is overwhelmed with emotions after receiving the news of her husband’s death, yet she finds a sense of relief knowing that for a slight moment she has regained her independence.

Don't use plagiarized sources. Get your custom essay on
“ Secret Desires in “The Story of an Hour” and “Young Goodman Brown” ”
Get custom paper
NEW! smart matching with writer

Meanwhile, Hawthorne takes a standpoint within the context of tradition, freedom, and identity. His idea of religion slowly disappears as his faith is tested throughout his journey in the woods. In this essay, both authors face internal and external conflicts such as freedom, a sense of wanting, and fear.

Nathaniel Hawthorne and Kate Chopin created characters who faced different challenges throughout their story. In “The Story of an Hour”, Mrs. Mallard struggles to come to an agreement with the feeling of happiness and joy after the news of her husband’s passing.

She quickly realizes what she’s feeling is not normal compared to other women, but her grief was different. In the story, she states, “Free! Body and soul free!” she kept whispering.” Independence is a forbidden pleasure that can be imagined only privately. Mrs. Mallard knew she could not portray this side to her audience, such resistance revealed how forbidden this pleasure was. This is a representation of self-conflict; she continually battles between internal and external emotions.

Throughout the story, there were a couple elements that stood as symbols, one of which was the open window. The open window symbolized new opportunities and freedom. As she gazed out the window, she saws the blue sky, the trees as it hovered over the house, and the sound of birds singing which signaled time of spring and new life. It provided a clear view of what she thought would be a bright future for her as a single woman.

The story “Young Goodman Brown”, reveals what the character Goodman Brown see’s to be corrupt about his town. His faith is tested as he enters the woods and notices the people from the town cosigning with the devil, it becomes an even bigger shocker to see his wife “Faith” along with them. This creates an internal conflict within himself. As he gets deeper into the woods his faith continues to wither, it seems as though his faith was solely based on others because of how quickly his mindset change. Hawthorne seems to suggest that people have the power to influence the way a person thinks. Now returning to the town, Goodman Brown now faces an external conflict with many of the characters. In the story it stated, “Goody Cloyse, that excellent old Christian, stood in the early sunshine, at her own lattice, catechising a little girl, who had brought her a pint of morning’s milk. Goodman Brown snatched away the child, as from the grasp of the fiend himself.” He struggles to trust anyone in the village after what he experienced in the woods. Goodman also makes it clear that he does not know whether it was a dream or reality and struggles trying to identify it. This story also has symbols that stand out, one of which is Faith’s pink ribbon. It was recognized more than once in the storying, hinting that it holds significance to the story. The color pink can represent innocence and youthfulness which fits Faith’s description. While in the woods Goodman notices that her pink ribbon blows away, possibly signifying that her purity and innocence has vanished.

In each story, the characters have a different outcome to their different obstacle. Kate Chopin’s character, Mrs. Mallard receives her piece of mind during the moment of her self-reflection, but her story ends when Mr. Mallard returns home and is in fact alive. The shock of seeing him killed her.

Secret Desires in “The Story of an Hour” and “Young Goodman Brown”. (2020, Sep 18). Retrieved from https://studymoose.com/secret-desires-in-the-story-of-an-hour-and-young-goodman-brown-essay 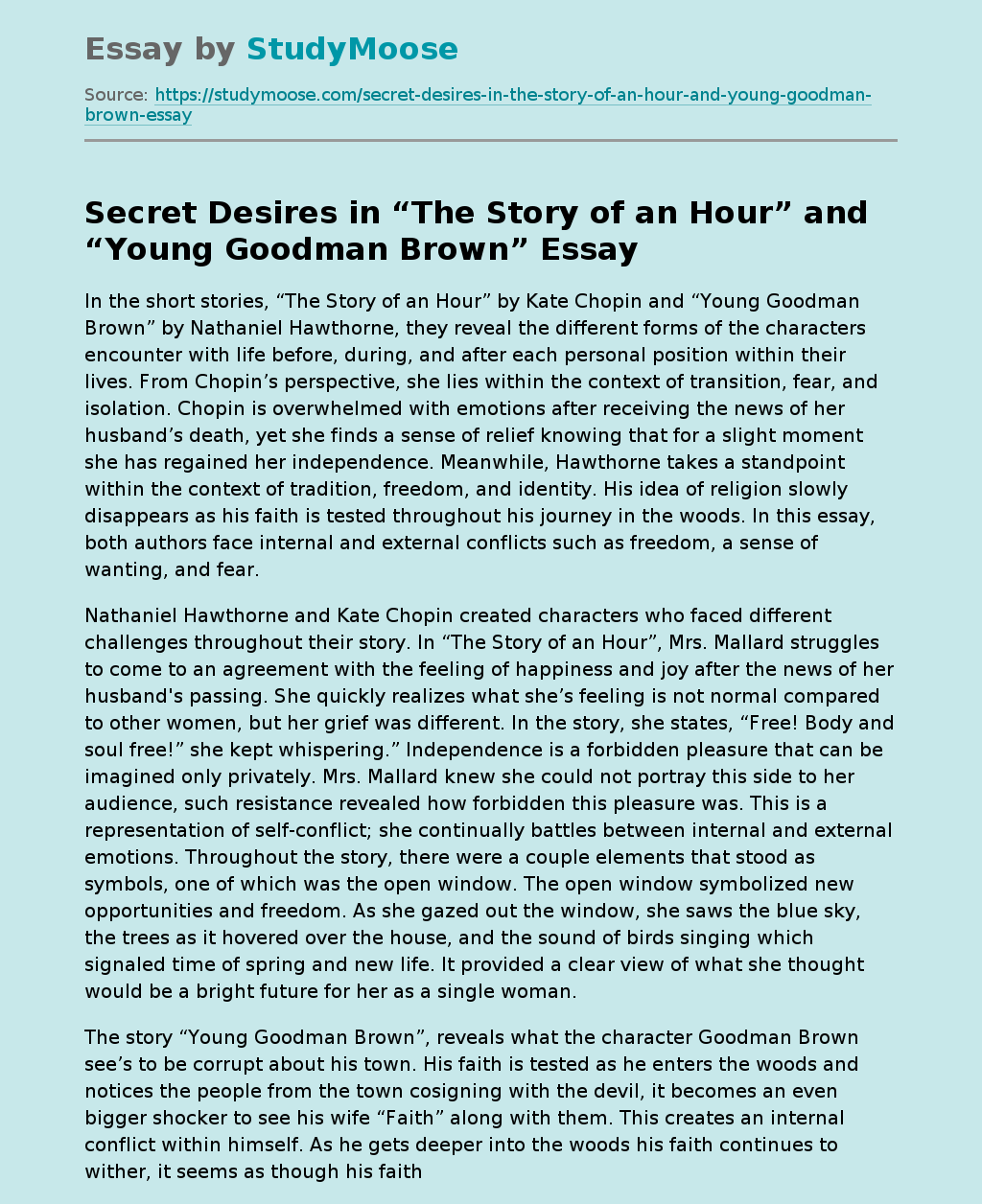