These two stories by Washington Irving and Nathaniel Hawthorne respectively, illustrate different examples of men wandering away from home, for somewhat different reasons, with somewhat the same results with the exception of the overall outcome upon the men. Careful analysis of the two stories can reveal both the similarities and the differences between the two, and how those things are important to the story as a whole.

Young Goodman Brown takes a look at the life of man after venturing into the woods in order to complete some unknown errand in the middle of the night.

He encounters an old man who bears a somewhat chilling resemblance of himself, as well as several other townspeople that have some significance in his life. He reaches his destination, which appears to be some sort of ritual, where he and his wife, who is ironically named faith, are to be initiated into what can be assumed to be a witches coven, due to the witch trials that had taken place in the same town nearly 150 years earlier.

Goodman Brown cries to heaven for salvation from this place, and the scene disappears.

The following day, after returning home, he has lost all faith in humanity, including his wife. He spends the rest of his life living in paranoia, therefore, his “dying hour was gloom”. What we see in this story is a man, who may or may not have dreamed the scene in which he took part, but nevertheless, he loses his entire faith in everything that he had previously been taught.

From his christianity to his faith in his marriage, everything falls apart in his mind. Hawthorne, known to write about the hypocrisy of the puritan system, may have been using this story as a way to bring forth doubt in the minds of his readers and make them question the very foundation of the lifestyle of the puritans.

In the story of Rip Van Winkle, we see a man, who was much loved by the town for his good deeds, but not so much by his wife for his unwillingness to do hard work on the farm, causing their farm to fall into much disarray. One day, he leaves home with his dog to go squirrel hunting in order to escape the nagging of his wife. He ventures up into the mountains and encounters some men carrying moonshine up the mountain. He follows them and encounters more men playing a game of nine-pins and drinking. Having no regard for what may happen, he begins to drink with them. He soon falls asleep, to awake almost 20 years later, after the occurrence of the American Revolution.

He returns to his village to discover that no one recognizes him, except for his now grown daughter who takes him in. He resumes his previous life of stories and good deeds, but never any hard work. This story, seemingly much less symbolic than Young Goodman Brown, still has a very valid point to make. This story points to the idea that hard work leads to prosperity, and avoiding said work could lead to a life that passes you by in an instant, resulting in a person unrecognizable to society.These two stories have many surface level similarities, but very glaring differences in the implicated meaning of these stories. Both seem to show a man, running away from home for a short time to complete some sort of errand.

Both also result in the changing of said man, although much less Rip Van Winkle, into something a little less desirable. Young Goodman Brown loses all faith in his life and humanity, therefore making the rest of his life miserable, and some might even say, not worth living. Rip stays buy and large the same slacking person that he was, and some even called him blessed for missing the Revolution, but no doubt he had many hard feelings about missing out on the raising of his children and things of the sort. The stories however, approach the change in a very different way, particularly in the case of Young Goodman Brown.

This story illustrates the dissent into this man’s madness in a way that truly affects the reader, and perhaps achieves Hawthorne’s goal of undermining the authority and legitimacy of the puritan system. The story specifically points out areas of Goodman Brown’s life that he should place mistrust in, therefore giving specific examples of corruption in the system. Rip van Winkle however, shows only the results of the events that took place in the mountains that day, and only recap Rip’s ability to maintain his previous lifestyle, although with a major chunk missing. Overall, I think it would be easier to say that these stories are far more different than similar because, despite the similar beginning events of each story, the plots take very different directions for very different reasons, and tell much different stories as a whole. 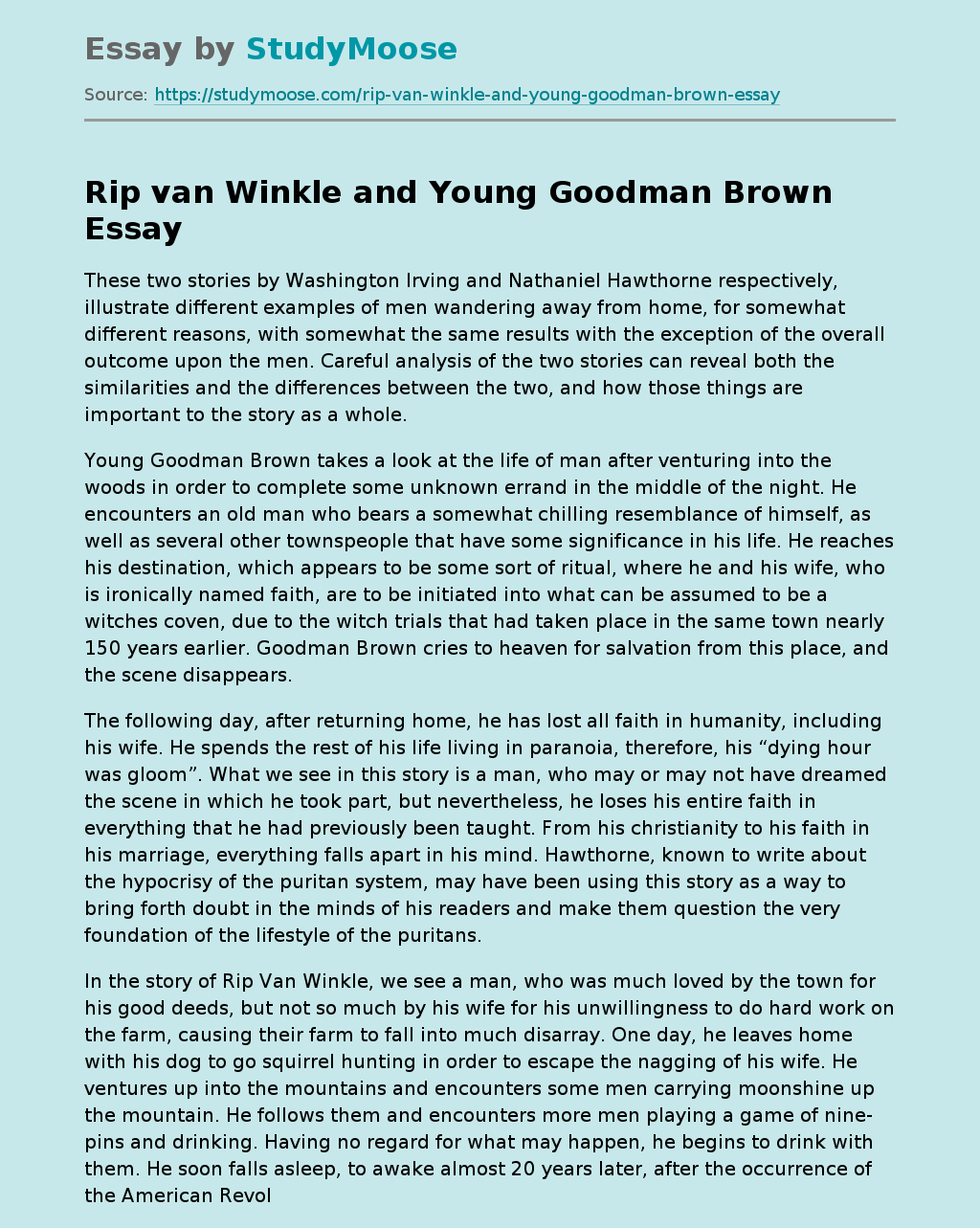