Freedom brings happiness. This is a major message shown in the story Rip Van Winkle. Rip Van Winkle is about a man who slept through the American Revolution for twenty years. During those twenty years he slept, his village and the whole country underwent a major change that affected the future of America. Written during the early 1800s when American literature was heavily influenced by the Europeans, Washington Irving portrays America’s search for an identity through one of the first true American literature, Rip Van Winkle, using elements and characteristics of the literary era of American Romanticism.

Don't use plagiarized sources. Get your custom essay on
“ Rip Van Winkle ”
Get custom paper
NEW! smart matching with writer

Washington Irving was born on April 3, 1783 to wealthy parents as the youngest of eleven. His older brothers influenced Irving’s taste in literature. One brother that indirectly led Washington Irving to success was named Peter. In 1815, Peter sent Irving to Liverpool to try to save their family business there which was on the verge of bankruptcy. He failed to save it, and the business became bankrupt in 1818.

Irving chose to remain in Europe after this incident and decided to make a living as an author. As he traveled Irving recorded his thoughts, observations, and thoughts in a tiny journal. He later turned these entries into short stories and compiled them into a collection in which he called The Sketchbook of Geoffrey Crayon.

This collection contained short stories based off of European folk tales but in American settings, as well as essays. Included in the collection is Rip Van Winkle, which was based off of the German folktale, Peter Klaus.

They turn to nature when they are facing problems or feeling inferior. “Poor Rip was at last reduced almost to despair; and his only alternative, to escape from the labor of the farm and clamor of his wife, was to take gun in hand and stroll away into the woods.” Here poor Rip Van Winkle is in distress from being constantly nagged by his wife, Dame Van Winkle. The only place he can get away from her and have peace is in the woods of the Kaatskill mountains. Nonconformity is another trait that American Romantic works tend to possess.

“Rip, in fact, was no politician; the changes of states and empires made but little impression on him; but there was one species of despotism under which he had long groaned, and that was- petticoat government.” In twenty years, Rip Van Winkle’s village and the whole went through a drastic change. Before the American Revolution, the the villagers, usually the men, would sit in an inn gossiping about village events. After the American Revolution, instead of gossiping about village events, they gossip about politics and politicians. America’s ruler changed from a king to a president. These critical changes did not interest him. Although he did accept the fact that the people he was familiar with are gone, he chose to not conform to this “new” country.

Washington Irving uses symbolism in Rip Van Winkle to showcase how the the American Revolution impacted the American society and their future. Rip Van Winkle represented America, and his wife represented England. Rip Van Winkle was controlled by his wife, much like how America was controlled by England. When America finally broke away from England’s control, Americans found happiness in their freedom which led them to gradually find their own identity, including their literature identity. When Rip Van Winkle gained freedom from the death of his wife, he was finally able to be happy, to be at peace, and to be able to do as he wishes. Overall, Rip Van Winkle symbolizes how Americans are what they are today, because they finally gained the freedom to create their own identity. 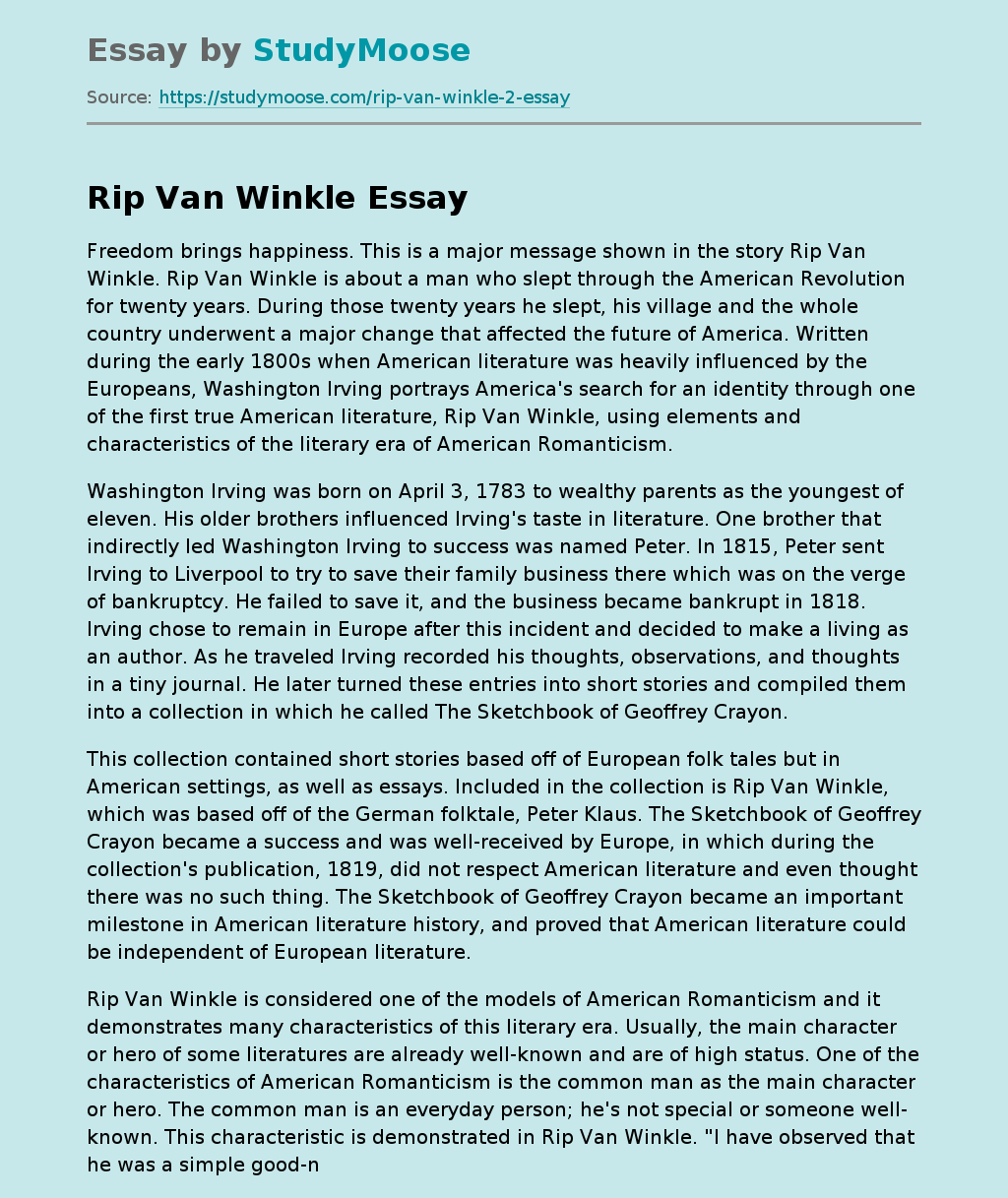