Irving’s “Rip Van Winkle” shows distinct characteristics of romanticism throughout. Irving’s unusual and original subject and the descriptions of nature, displays these romantic qualities of originality, connection with nature and an emotional sincerity.

Rip van winkle is about a man who goes deep into the woods one day to go hunting. Rip some one calling his name and is led to strange men. “What seemed particularly odd to Rip was, that though these folks were evidently amusing themselves, yet they maintained the gravest faces, the most mysterious silence, and were, withal the most melancholy party of pleasure he had ever witnessed.

” Rip drinks some ale and falls asleep. He wakes up twenty years later not knowing time has passed by. This strange plotline is very romantic. It would be impossible for someone to fall asleep for twenty years and still be living. It goes against the nature of science. Most of the stories of the time written by men were historical.

Although Irving’s attempts to make his story seem true by referring to historical documents, it is too strange to be real.

Another distinct romantic quality of “Rip Van Winkle is the detailed descriptions of nature in the story such as the Catskill mountains and the Hudson river. “Panting and fatigued, he threw himself, late in the afternoon, on a green knoll, covered with mountain herbage, that crowned the brow of a precipice. From an opening between the trees he could overlook all the lower country for many a mile of rich woodland.

He saw at a distance the lordly Hudson, far, far below him, moving on its silent but majestic course, with the reflection of a purple cloud, or the sail of a lagging bark, here and there sleeping on its glassy bosom, and at last losing itself in the blue highlands.

On the other side he looked down into a deep mountain glen, wild, lonely, and shagged, the bottom filled with fragments from the impending cliffs, and scarcely lighted by the reflected rays of the setting sun. For some time Rip lay musing on this scene; evening was gradually advancing; the mountains began to throw their long blue shadows over the valleys; he saw that it would be dark long before he could reach the village…” Irving uses dreamy words such as majestic and lordly which suggest a presence of God. God created nature and is the cause for the cycle of it. The magnificent description of the nature is almost like a heaven and with the presence of god, again shows the unusual and strange aspect of romanticism in the story.

The tale of Rip Van Winkle is mysterious and leaves the reader wondering if it really happened. As Irving’s other stories “The Devil and Tom Walker” and “Sleepy Hollow”, “Rip Van Winkle” has an curious plotline and in depth description of nature. It is extremely romantic and one of the first of its kind. 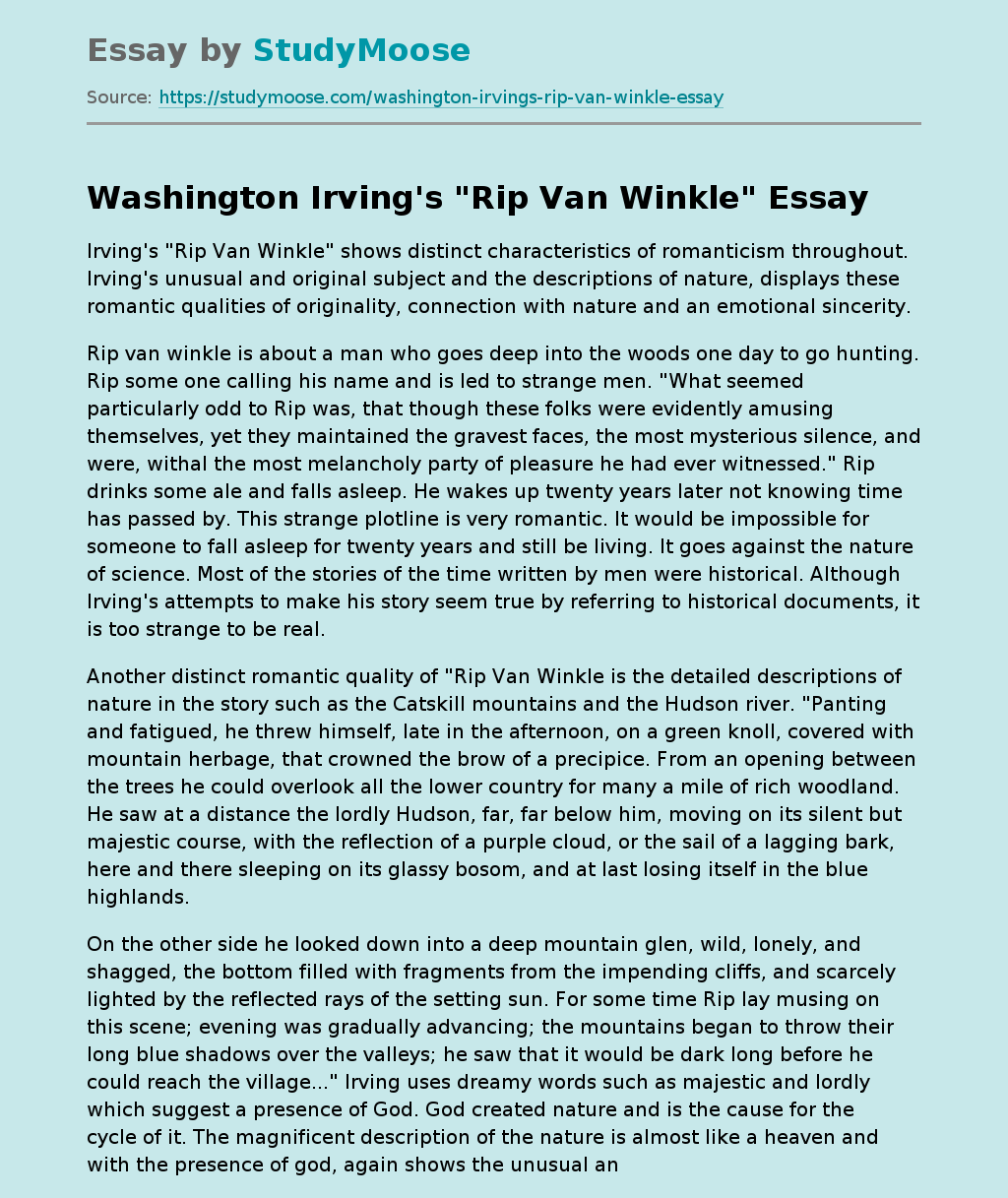