One of the main conflicts in the story “Rip Van Winkle” is about Rip falling asleep for 20 years. To escape the verbal abuse of his wife that he had to deal with every day, Rip left to the forest with his dog Wolf. While he was enjoying a calm view at the top of the mountain, a strange man yelled his name over and over. The man reached Rip’s location and asked him if he could help him with the bags he carried.

Don't use plagiarized sources. Get your custom essay on
“ Analize a Conflict in “Rip Van Winkle” ”
Get custom paper
NEW! smart matching with writer

Rip helped the man and they headed to the mountain torrent. When they got there, they found a group of strange men playing nine-pins. Rip drank some Dutch gin that the men gave him, got really drunk, and fell asleep. When he woke up his dog was missing and his gun had blemished. He decided to go back to his town, but all the routes to get there had changed.

He finally got to his town and saw that everything and everyone had changed.

Rip even noticed that he had grown a one foot long beard. Nobody recognized him so they thought he was a spy, since he was talking about the king while others were talking about George Washington and the war. A girl approached him and he started asking her who her father and mother were. She said Rip Van Winkle and Dame Van Winkle. Rip figured that was his daughter so he told her that he was her father. She was very happy so see him again and brought him to live with her.

Rip’s sleep’s real meaning is that he is escaping from his family and his responsibilities. Irving, the author of the story, had Rip draw in to sleep in the first place, so his character could have an adventure when he woke up, not just so he could escape the present. It’s important to see both points because Rip going into the spiritual woods means both escape and adventure. The point that Irving was making was that slowness will cause you to miss out on the things of the future. This story is like showing us what would happen if we could escape our responsibilities and come back at a convenient time.

The fact that Rip’s wife had always nagged on him didn’t make him sorry that he slept for as long as he did. He was actually relieved because he escaped the snatch that his wife had on him. It seemed that she took away a part of his man-hood by always telling him what to do and what not to do. Rip then returned back to the town square and realized what had happened. Not too many people believed his story but reality struck and people started believing him. He was no longer looked at as a lazy irresponsible man, but as a hero.

During the Romantic Period of American Literature it was believed that imagination is greater than logic and that imagination is the greater solution to finding truth and beauty, what most authors valued. Romantic writers also believed that cities led to corruption; therefore nature is a safe place to become more spiritual. This is why Rip Van Winkle schemes into the forest with his dog to escape the attack of his wife. Sleeping for 20 years is where the “imagination is greater than logic” part comes into play. The moral of the story, however, is to have your priorities in order. Rip helped neighbors whenever possible, yet was unwilling towards his family. Of course sleeping for 20 years isn’t reasonable for us. Whether Irving is romantic or not, the point is to display to every reader throughout time that we cannot sleep through a revolution, or shrink our responsibilities. 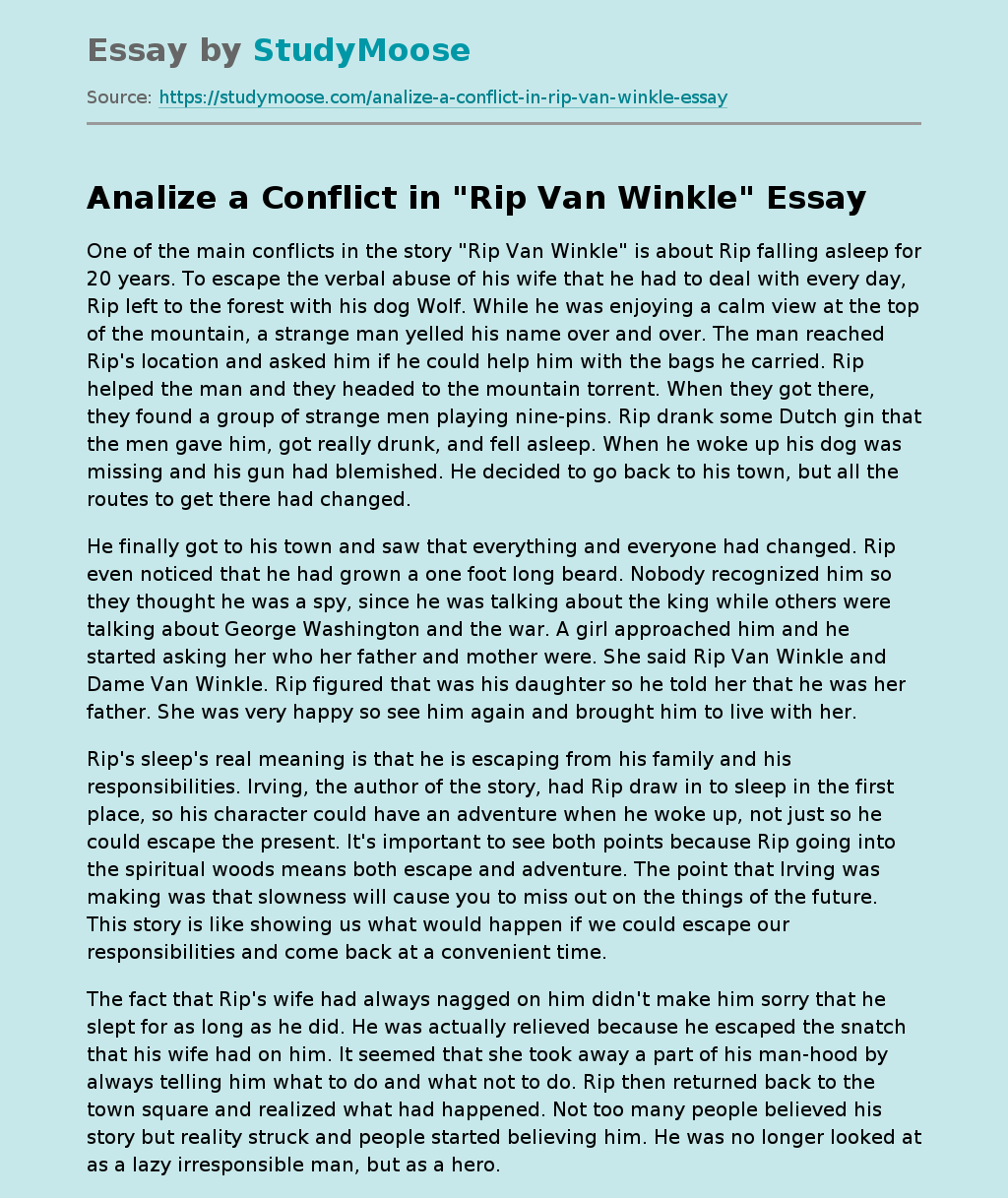